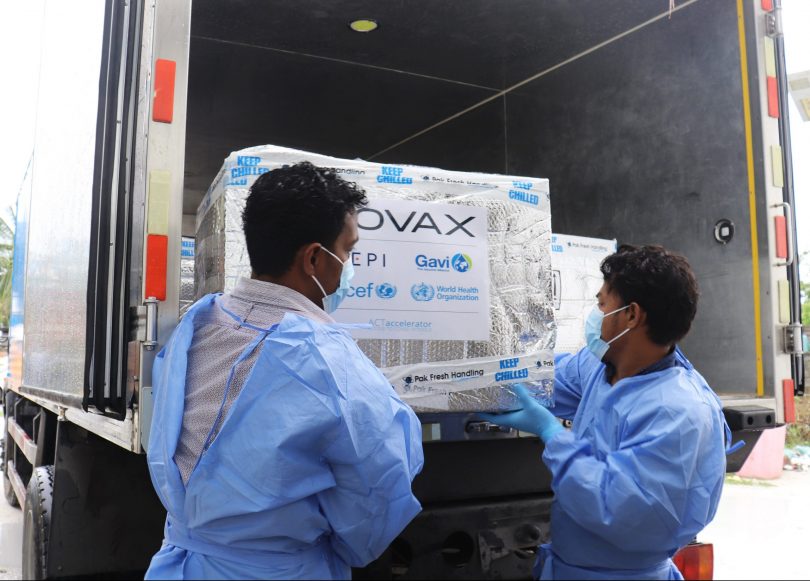 Kiribati received the first batch of 24,000 COVID-19 vaccine doses through COVAX in May (UNICEF Pacific)

Japan will host a landmark COVAX Summit on Wednesday (2 June) to galvanise support for global vaccine equity in the fight against COVID-19. The COVAX Advance Market Commitment (AMC) urgently needs US$1.6 billion to secure an additional 500 million COVID-19 vaccine doses to protect those most at risk in lower-income countries. These vulnerable people are increasingly left behind in the global vaccine race.

Launched in June last year, the COVAX AMC is an innovative financing mechanism that gives 92 lower-income countries access to a pool of donor-funded and subsidised vaccines. By combining contributions from donor countries and the private sector, COVAX aims to achieve 30% vaccine coverage by early 2022 in lower-income countries, many of which cannot afford to purchase or manufacture vaccines themselves. As the prime minister of Italy, Mario Draghi, recently said: “The great merit of COVAX is guaranteeing the distribution of vaccines according to the actual needs of recipient countries, and not on the basis of the economic, political or geopolitical interests.”

About 1.8 billion doses of COVID-19 vaccines have already been reserved, but not yet secured, through the COVAX AMC. The initiative has delivered its first tranche of vaccines to more than 65% of eligible lower-income countries. But demand is vastly outstripping supply. More than 90% of lower-income countries with a combined population of nearly 4 billion people are requesting greater vaccine coverage from COVAX to save lives and protect against new virus variants. More funding is urgently needed.

Just four months after the World Health Organization approved the first COVID-19 vaccine for emergency use, more than one billion vaccine doses have been administered worldwide. It’s an impressive feat. But the vast majority of these have been in wealthy countries. As shown in the figure below, high-income and upper-middle-income countries have together received more than 80% of administered vaccines to date, while only 0.31% of vaccines have been administered in low-income countries. At the current rate, it is estimated that about 85 countries will not have widespread COVID-19 vaccine coverage until 2023. In the words of WHO Director-General Tedros Adhanom, “the world is on the brink of a catastrophic moral failure”. 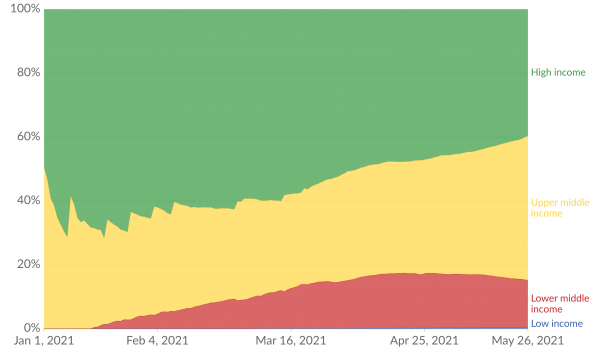 The Australian Government was an early supporter of COVAX AMC. In August 2020, the government pledged A$80 million towards the initiative. But since then, the Australian Government has been largely silent on global vaccine equity, tending to instead focus on the vaccine rollout in the Indo-Pacific region in line with its geopolitical interests. This includes committing A$523.2 million for the Regional Vaccine Access and Health Security Initiative to deliver 10,000 doses a week to countries in the Pacific and Southeast Asia, and an additional A$100 million as part of the Quad partnership (with the United States, India and Japan) to provide over one billion vaccines to the Indo-Pacific by 2022. These are laudable commitments.

As Vice-Chair of the Gavi Board – the agency leading the procurement and delivery of vaccines for COVAX – Australia has an obligation to address the global dimension of this pandemic. Global equitable access to a vaccine, with priority placed on protecting health workers and at-risk populations – regardless of their citizenship or wealth – is the only way to bring this pandemic under control and mitigate its devastating impacts. If the pandemic has taught us anything, it is that our economic and health systems are deeply interconnected and so too is our recovery.

The Indo-Pacific, and indeed Australia, cannot fully recover without worldwide vaccine equity. Without global equitable access to a vaccine, the virus will continue to mutate, trade and travel will continue to be curbed, and economies will not rebound as fast as they otherwise could. Ernst and Young estimates that Australia’s economy is losing A$7.6 billion a month due to closed borders. According to that math, Australia’s current A$80 million contribution to COVAX is equivalent to just eight hours of losses from closed borders.

Australia’s contribution to the global COVID-19 response should not end at COVAX, however. The COVAX AMC supports global vaccine distribution (the supply chain), but greater investment is also needed on the demand side (the trust chain) to address vaccine hesitancy and build confidence in the COVID-19 vaccine and the institutions delivering it. After all, it is vaccinations (not vaccines) that save lives.

Investing in the global vaccine rollout would complement Australia’s generous bilateral support in the Indo-Pacific, ensuring that all regions of the world can make a timely recovery from COVID-19 and its devastating aftershocks.