For people with an interest in the international financing aspects of the COP 21 climate change negotiations in Paris, COP 21 has been notable for three big failures.

For the first, we can thank the OECD which announced with much fanfare in October that developed countries were already three-fifths of the way toward achieving their US$100-billion-per-annum-by-2020 Copenhagen climate finance commitment, having mobilised US$62 billion in both public and private finance for climate change mitigation and adaptation in 2014. Developing countries, and in particular China, India, Brazil and South Africa, have now seen enough of these estimates and have roundly rejected them. Part of the problem was methodological. Developing countries and some other observers didn’t like the fact that the estimates included financial flows on hard terms as well as flows from aid budgets.

The OECD’s methodology shouldn’t have been a total surprise to anybody, since it was much the same as that used in estimating the magnitude of climate finance during the so-called “fast-start” period from 2010 to 2012. It has never been claimed that the public element of the US$100 billion pledge would be provided entirely on concessional terms; it was claimed only that this amount would be “mobilised”—a nicely slippery term—by developed countries. It certainly was claimed that public climate finance would in some sense be “new and additional” but that too is a pliable concept which has not prevented donors drawing almost all their concessional public finance from aid budgets. The principal problem with the methodology, as previously suggested, was that it didn’t distinguish between principal-purpose climate finance and other finance that might have had some bearing on climate change.

The real problem was deeper, yet simpler. It was that developing countries simply have not perceived the stampede of dollars across their borders which has been depicted by the OECD. Their governments inevitably find it implausible and rather insulting to be informed that there has been a substantial leap in investment in climate change mitigation and adaptation when they, standing in the centre of the freeway, have noticed only the occasional Volkswagen pass by. A further and equally obvious problem is that the OECD’s Environment Directorate, which was responsible for the 2015 report, apparently allowed developing countries no role involved in contributing to the preparation of estimates or assuring their quality. (By contrast, the OECD’s Development Cooperation Directorate, which last year published a much more sober estimate of public climate finance, has signalled its intention thoroughly to consult with developing countries in developing the nascent statistical construct of Total Official Support for Sustainable Development, which will include but not be limited to climate flows.)

The OECD’s assumption appears to have been that this was another fast-start accounting exercise, and that the bigger the number was, the better. But the stakes were much higher this time around. The collective US$10-billion-per-annum fast-start commitment was always perceived as an initial and undemanding down-payment, promised and accepted in a desperate attempt to salvage something more or less concrete and immediate from the Copenhagen talks. Both developed and developing countries were largely relaxed about the measurement and delivery of this financing. At the same time, developing countries have since 2009 been determined to hold developed countries to account for the longer-term and much larger US$100 billion commitment that Hillary Clinton made on behalf of developed countries in Copenhagen.

In short, the OECD blundered. It was neither necessary nor plausible to cut the numbers in such a way as to suggest that climate finance had skyrocketed already by 2014. The developing country audience would have fully expected the growth in such finance to be gradual and probably back-loaded toward 2018-2020. They were certainly looking for donors to provide confidence, in the form of commitments for the 2016-2020 period, that the funds would be delivered. They were not looking to be told that the job was already almost done. Tactically, it would have been so much better if the OECD had underestimated rather than overestimated.

The second failure is due to Australia, though we didn’t have to do anything in order to achieve it. The United States, the only major donor not to have recently announced a climate finance commitment for the period between now and 2020, has now done so. The US will double its grant-based adaptation financing, which is about US$400 million per annum now, by 2020. Taking into account its earlier US$3 billion commitment to the Green Climate Fund, that roughly doubles its overall annual expenditure to somewhere above US$1.6 billion by 2020. That’s still not a particularly large commitment relative to the size of the US economy but it probably isn’t the end of the story. It does see the US move four rungs up the league table of donors who have made commitments, as shown below (this chart increases the US contribution relative to an earlier version of it here, but keeps the US in the same position to highlight the size of the increase). 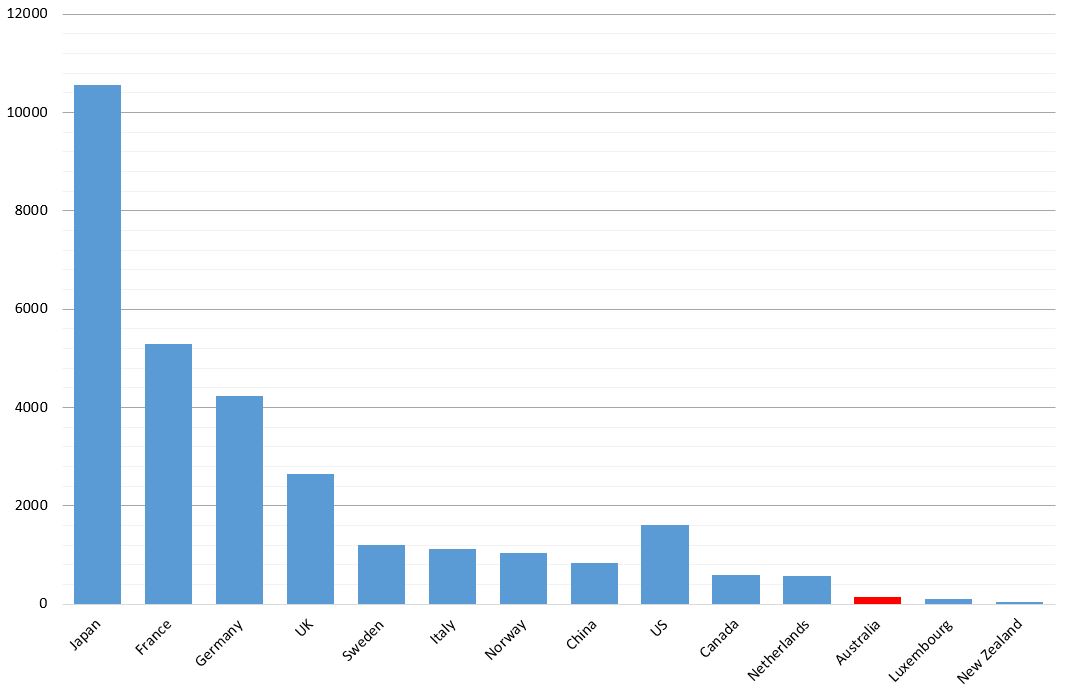 The US is now in the large camp of donors who have doubled some part or other of their climate finance effort, leaving Australia looking sad and sorry toward the bottom of the ladder.

The fact that the US’s new pledge is directed to adaptation, and at this stage appears to more or less equal to its investment in mitigation, is particularly embarrassing for Australia. We are a country that regularly avows a special responsibility for protecting the interests of the vulnerable Pacific island countries, and indeed a country that advertises that responsibility as a significant element of its diplomatic relationship with the US. However, not only is Australia’s overall climate finance commitment, amounting to less than US$150 million per annum, small in aggregate, but it contains no commitment to provide any specific level of adaptation financing for Pacific island or other countries. Obviously, Australia will provide some considerable level of such financing but it seems clear that, at least at this stage, the intention is to tag run-of-the-mill activities as adaptation-relevant wherever possible. This lack of specificity will help to keep Australia’s climate finance out of the line of sight of developing countries who might otherwise be better placed to demand a high level of accountability for it.

It is harder to know where to lay the ultimate blame for the third failure. Now that we have the draft text of the COP 21 agreement, no matter how festooned with square brackets, we can see clearly that it contains no serious provisions to ensure that international carbon markets develop to the advantage of poor countries and those middle income countries with the potential to be low-cost providers of climate-change mitigation services. The relevant section, Article 3ter, currently exists in two competing versions. One, which is shown below in all its bracketed glory (with “###” presumably a proxy for words that cannot be uttered, such as “pledge” and “commitment”), tries very obliquely to make space for the introduction of a flexibility mechanism along the broad lines of the Clean Development Mechanism of the Kyoto Protocol; the other, which would be favoured by developing countries seeking investment in public infrastructure, describes a public investment mechanism much like the existing Green Climate Fund. The latter, by the way, gets only a couple of passing references in the draft, which is silent on the large question of its future resource mobilisation arrangements.

It’s important to remember that there is an intimate relationship between the mitigation track of these negotiations and the finance track. It’s not merely that mobilising a credible body of finance is important as a signal of goodwill and commitment on the part of the developed countries, though that is certainly the case. It’s also that a great many developing countries have made two-part mitigation commitments, with the higher level of mitigation only to be achieved if sufficient international finance is forthcoming. As far as I’m aware, no country has precisely costed the difference between their lower and higher mitigation targets, or set out a pipeline of investment programmes that would deliver the higher targets. This would not be easy to do. However, it’s a commonplace that the actual cost differential across all developing countries for the year 2020 would be far in excess of the US$100 billion Copenhagen target.

In other words, the Copenhagen commitment had the character of a down-payment. Few developing countries would ever have imagined that finance on the scale needed could be found from public sources, even if complemented by private flows that are in some sense mobilised by public investment (for example, through the provision of risk reduction financing). The consensus around the time of the US$100 billion commitment was that much of this funding, and much more besides, would be mobilised not through allied public financing but rather through regulatory and cooperative action to create a robust international trade in carbon credits. These might be forest carbon credits, given life by a global or several regional trading platforms, or more likely credits generated in other sectors of the economy such as energy, transport, construction and waste management. the clean development mechanism of the Kyoto protocol, suitably modified to increase its scale and address some of its credibility problems.

There has been some talk of revitalising crediting mechanisms, with a focus on learning lesson from past carbon trading between developed countries, but there has been remarkably little focus, except in the cerebral margins (see the trader view here and the development view here), on flexibility mechanisms that would deliver investment to developing countries with dual benefits for their economies and the global climate. It might be argued that this is a result of the bottom-up nature of the mitigation pledging process but there is in fact no reason why, in the context of a bottom-up agreement, UNFCCC parties or subsets of them couldn’t agree on joint arrangements for certifying the quality of internationally tradable credits and then monitoring the trade in them. Indeed, one would think that the bottom-up nature of the impending agreement might have actually facilitated the development of such arrangements, since there is less need of unanimity on every detail.

In sum, the OECD did nobody any favours with its expansive estimate of current climate finance. The best thing now would be to set up a process for doing the numbers more carefully, and jointly with the countries that are putatively in receipt of this financing. Australia will probably get away with its miserly 2016-2020 climate finance pledge, and the absence of any specific commitment to adaptation, but only because other countries are cutting our new Prime Minister some slack. In the two or three years ahead, they will be looking for Australia to make up lost ground. It wouldn’t hurt to make a start in the final moments of COP 21 by saying something more specific about the allocation of the financing recently committed, and about the transparency and accountability arrangements that will apply to it, even if we can’t add to its quantity. Finally, the biggest item of development business will probably have to be left for another day—that is, the business of agreeing on arrangements that would mobilise substantial international investment in developing countries for the purpose of generating tradeable carbon credits.