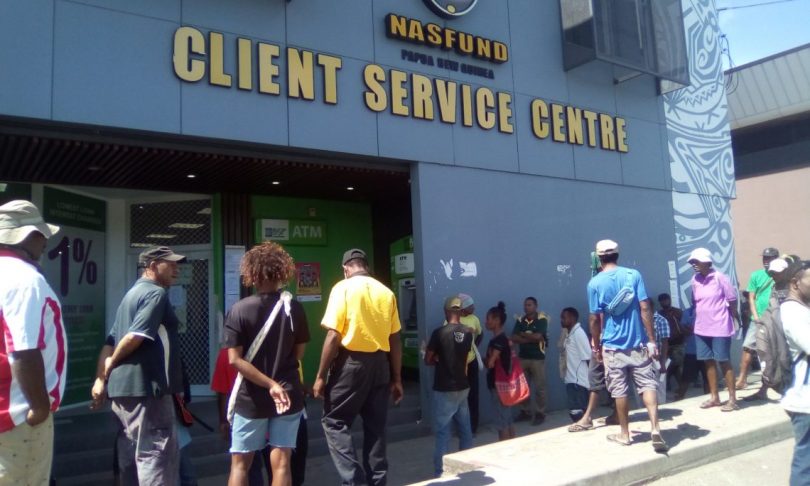 The beginning of a very long queue at the NASFUND office, Four Mile, as unemployed people seek early release of their superannuation (Photo credit: Jotam Sinopane)

The COVID-19 pandemic could not have arrived at a worse time for Papua New Guinea. In addition to its declining health indicators, years of mismanagement have significantly weakened the country’s economic fundamentals, depriving its government of the ammunition needed to combat a looming economic downturn. The ailing economy, characterised by a prolonged recession in the non-resource sector, increasing public debt and an increasing unemployment rate, has now been further weakened by the crash in world commodity prices, the ban on international visitors, and the partial lockdown measures imposed internally.

A unique feature of this episode is that governments around the world have closed their national borders and imposed strict international travel bans and quarantine policies. PNG has followed suit by introducing a state of emergency, prohibiting public events, restricting international and domestic travel, and suspending non-essential business and services. While cargo shipments are still running, shipping volumes are significantly lower compared to normal times. A global shutdown of this magnitude has not been witnessed in recent history.

During the global financial crisis in 2008/09, when the world economy entered into a deep recession, PNG’s economy escaped unscathed, thanks to its insulated financial system and sound budget balance then. Today, not only is PNG in a much weaker fiscal position than a decade ago but the nature of the economic shock, both global and local, is very different to other shocks in living memory. This puts the economy in a more vulnerable position than ever.

This year, the economy is expected to experience negative growth with a shortfall of K2 billion in tax revenues and K5 billion in export revenues. The latest IMF forecast for GDP growth is -1%, but the outcome could be much worse. The economic slowdown can already be seen, with a number of hotels in Port Moresby closing their doors. Rimbunan Hijau (RH), the largest logging company in PNG, has halted most of its operations and stopped paying out royalties to landowners, citing the pandemic in addition to higher export taxes imposed by the government. The resource sector has also scaled down its production and expects to stand down more workers, as the global demand for commodities has declined. Households in the agriculture and transport sectors, which form the core of PNG’s large informal economy, have taken a huge hit on their income as a result of the travel restrictions.

On 2 April, PNG’s Treasurer announced an economic stimulus package that he valued at K5.6 billion (5% of total GDP). This includes private sector contributions of a three-month K0.6 billion loan repayment moratorium offered by commercial banks and K0.5 billion in early superannuation withdrawals for workers who have lost their jobs. The biggest component is planned deficit financing of K1.5 billion from official international lenders such as the IMF and K2.5 billion of domestic bonds – largely to fill the K2 billion gap left by revenue losses. Reflecting the government’s limited options, new government spending (in health and to fund the disciplinary forces) only made up K0.5 billion of the total package.

The Bank of PNG (BPNG) has also announced a range of monetary easing measures to encourage banks to dip into their regulatory capital and liquidity buffers, hoping to stimulate more lending activity during the downturn. The Kina Facility Rate (KFR), the interest rate at which funds can be loaned or borrowed overnight between banking institutions, was cut by 200 basis points from five to three percent. The cash reserves requirement (CRR), which sets the minimum amount of reserves that must be held by a commercial bank in the central bank, was reduced from ten to seven percent. The width of the interest rate corridor for repurchase agreements (repo), which guide short-term market interest rates towards BPNG’s target policy rate, was raised 25 basis points to 100 basis points on both sides of the KFR, to encourage more unsecured overnight interbank lending. The central bank has also indicated its willingness to provide additional liquidity to financial institutions by embarking on quantitative easing, where BPNG pledges to buy back government securities (usually not transferrable until maturity) on-demand for up to three months.

All in all, it’s a substantial package, promptly assembled. But are the various components sound, and what does the package amount to as a whole? We will explore these questions in Part 2.

This post is part of the #COVID-19 and the Pacific series. See also this recent post by Jotam Sinopane on the PNG stimulus package.