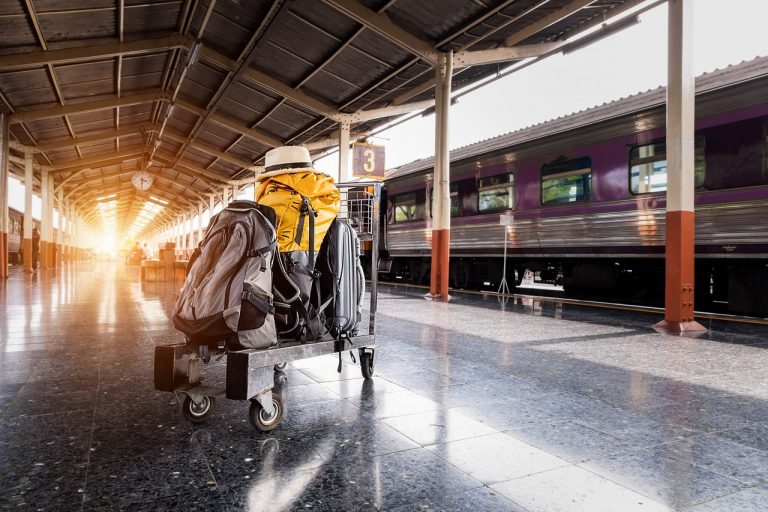 By Stephen Howes and Evie Sharman

When the third year backpacker visa extension was announced at the end of 2018, we speculated that one-third of second-year backpackers would take up the option of undertaking regional work – mainly working on a farm – for six months in their second year to be able to get a third-year visa.

That’s remarkably close to the 33% we predicted back in 2018. Perhaps a lucky coincidence, but it certainly suggests that the third-year visa is going to be a popular option, and that a significant number of backpackers readied themselves to take advantage of this new opportunity.

It took seven years for the second-year backpacker grant rate to reach 20% of the first-year grant rate, around which level it has since more or less stabilised. It remains to be seen whether the third-to-second-year ratio will stabilise at one-third or continue to rise.

Also as predicted, the third-year visa is being used mainly as an agriculture visa: 73% of those granted a third-year visa in 2020-21 got one in return for farm work (this number based only on the first six months). Another 11% got it for construction work, and 8% for work in the accommodation and hospitality sector.

There are two drivers of this shift away from farm work. One is a problem with data, with an increasing number of extensions granted for work “not classified” under the main (developed country) backpacker visa, the 417. The other is that visa extensions for the second backpacker visa, the 462 (mainly for developing countries), were only introduced in 2016, and from the start – unlike 417 visa holders – 462 holders could work in hospitality and tourism to get their extension (though only in northern Australia). 462 visa holders make up a growing share of backpackers, steadily rising from 1% in 2005-06 to 21% in 2020-21, and this has pushed down aggregate reliance on farm work. 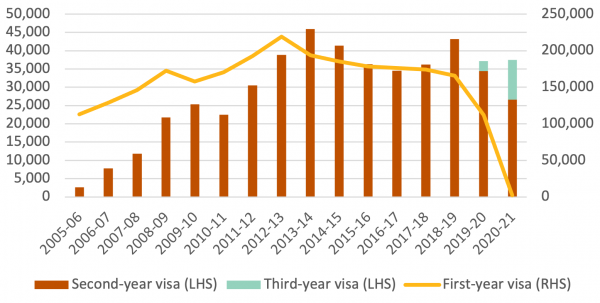 Who are the second and third-year backpackers? The decline in second-year backpackers is concentrated in two countries that were seeing falls pre-COVID: Taiwan and South Korea. These countries’ backpackers are now less likely to extend, but the two are also now sending far fewer backpackers. In 2012-13, Korea sent the second highest number of new backpackers, and Taiwan the third highest. The UK retains its top position, but Korean and Taiwanese backpacker numbers had plummeted well before COVID, perhaps because of backpacker exploitation stories.

The importance of the UK explains why the long-running National Party push for an Asian agriculture visa was successful when the Australian government agreed to allow British backpackers to come to Australia for two years without any work requirement – just as Australian backpackers to the UK can.

The biggest countries for second-year extensions tend to be the biggest for the third, but Taiwan is in top place for the latter, and Indonesia makes it onto the list. 60% of Indonesians who extended for a second year did so for a third, and 40% or more of Chinese and Taiwanese.

It will be interesting to see what happens to third-year numbers as international borders reopen. Given that most migrant numbers have fallen, one would guess that the third-year share would increase further. Yet another reason why we don’t need an Asian agriculture visa.

Note: All backpacker data is from the Department of Home Affairs. Extension ratios are calculated relative to the previous year’s base e.g. for 2019-20 third-to second, 2019-20 third-year visas over 2018-19 second-year visas.

Evie Sharman
Evie Sharman is a Research Officer at the Development Policy Centre, working in the Pacific Labour Mobility team.