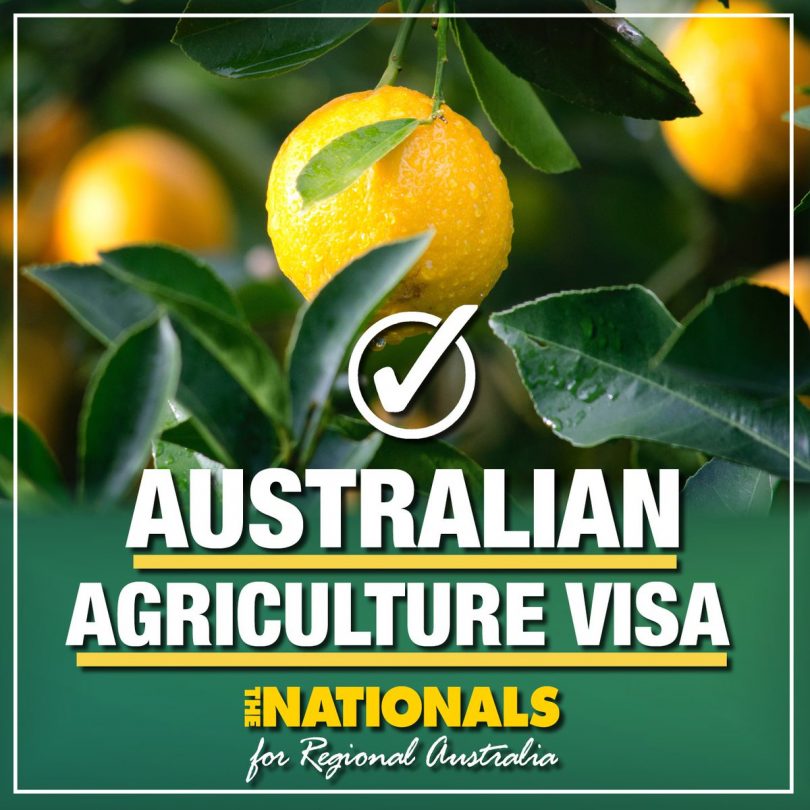 In my last blog on the subject, I set out three ways by which the June ASEAN agricultural visa announcement could evolve. One was that Asian countries would be allowed to join the Pacific Seasonal Worker Programme (SWP) and the Pacific Labour Scheme (PLS). Another was that a separate scheme would be set up for Asian countries. A third would be that existing backpacker caps for Asians to work in Australia would be increased.

Yesterday’s announcement sounds like the second option. A new Australian Agriculture visa is to be created in addition to the SWP and PLS.

The new announcement is significant, since it comes from a group of Ministers on both sides of the Coalition. But, probably reflecting the ongoing disagreements between them, it is also very vague – it is hard to believe that the regulations for the new visa will be in place by the end of next month. No countries are mentioned. Agriculture Minister David Littleproud highlighted the Philippines, Thailand and Vietnam (and the UK) in his ABC interview. The press release only says that “[t]he Australian Agriculture visa will be open to applicants from a range of countries negotiated through bilateral agreements”. Assurances are provided to those worried about worker exploitation (the visa will be designed “to ensure a high degree of integrity and safeguards for workers”), and to Pacific governments, whose “interests [will be] protected”.

Despite these assurances, the press release is in some ways more alarming than the initial Littleproud announcement. That was about agricultural work. This new visa covers not only agriculture but meat processing, forestry and fishing. It should be called not an agricultural but a regional visa.

The Pacific may draw comfort from the fact that administration of the new visa is to be given to the Department of Foreign Affairs and Trade (DFAT). This is an odd decision (isn’t Home Affairs responsible for visas?), but good for the Pacific since DFAT has responsibility for the Pacific Step-up, a flagship of the Morrison government, at the heart of which is the promotion of Pacific labour mobility.

Nevertheless, even with DFAT in charge, the new visa is a threat to Pacific labour mobility, in particular the PLS. Meat processing is responsible for 71% of PLS jobs. Agriculture and horticulture are responsible for another 21%. If employers in these two sectors switch to the new visa, the PLS will collapse. The SWP is also in danger. The risks are especially high given the press release’s commitment to a “demand driven approach” – the implication being that the new visa will be uncapped.

The Australian Agriculture visa lacks public policy justification. All the sectors covered by it are already covered by the PLS. Timor-Leste and the Pacific island nations who send workers under the SWP and PLS have the numbers to meet the demands for unskilled labour in those sectors. Yet it is clear that the political imperative to introduce a new visa is irresistible. If so, I would argue that it go ahead only if two conditions are met.

First, any employer seeking to use this new visa should have to demonstrate to DFAT’s satisfaction that the workers it needs can be found neither in Australia nor in the Pacific. Only with this extended version of labour-market testing in place could the government be said to have followed through on its commitment to protect the interests of the Pacific island nations.

Second, the terms that apply to this new visa should be the same as those that apply to the PLS. If this new visa is to have a pathway to permanency built into it (something which the press release says will be considered) then so too should the PLS. And whatever safeguards are applied to the PLS should equally apply to this scheme. I earlier described the idea of “two agriculture visa schemes targeted at different countries with different terms” as fantastical. I hope I was right.