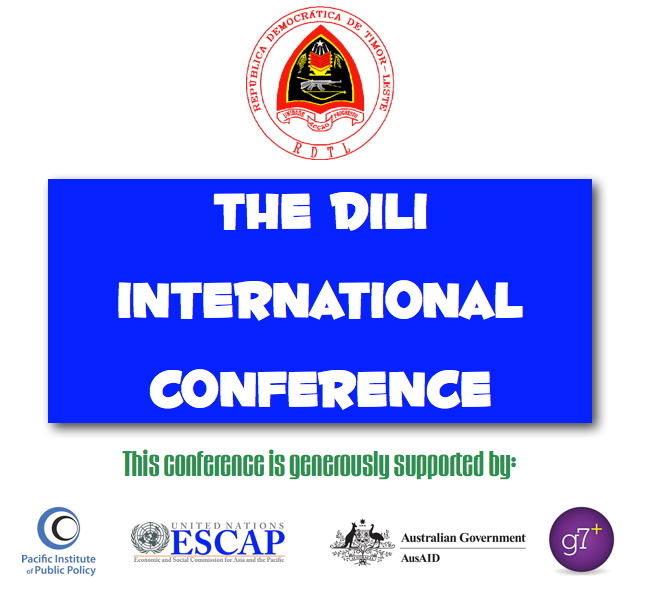 Timor-Leste’s indefatigable finance minister, Emilia Pires, spoke about the g7+ group of fragile countries when she delivered the Development Policy Centre’s inaugural Harold Mitchell lecture in November 2012.  She chairs the g7+ and is also a member of the UN Secretary-General’s High-Level Panel on the post-2015 international development agenda, charged with quite rapidly developing broad recommendations on what should follow the Millennium Development Goals (MDGs) upon their expiry in 2015.  Wearing both of these hats, she convened an international conference on the post-2015 development agenda last week in Dili.  This brought together nearly 50 countries—g7+ members, Pacific island countries, Portuguese-speaking African countries and development partners—to discuss how the specific development challenges faced by fragile and conflict-affected states should be reflected in the post-2015 framework.  You can read the Dili Consensus here, and also the outcomes of related discussions among Pacific island countries here [pdf].

Under the Development Policy Centre’s partnership with the Pacific Institute of Public Policy (PIPP), I was part of a team that provided some facilitation for the Dili conference, before and during the event.  I discuss below five specific points about the conference and its outcomes that I think are particularly noteworthy.  While I’m generally content to observe the smokestacks of the post-2015 industry from a safe distance, and am not a fervent believer in the value of UN high-level panels, I do think Timor-Leste’s decision to convene this discussion was a wise and well-timed one.

First, the Dili conference was, to my knowledge, the first such interaction between two quite different types of fragile state—one type being conflict-affected, the other geographically vulnerable.  Fragile states lack a bloc identity.  Even the typology of fragile states is a fraught business—for example, the OECD counts 47 of them and the World Bank 35, while neither the OECD nor the Bank counts certain countries that consider themselves obviously fragile.  In contributing to some background work for this conference, I found a useful starting point was simply to look at the intersection of three groups: the two mentioned above and the group of 49 Least-Developed Countries.  This gives 23 “core fragile” states that face challenges in multiple dimensions, including 16 of the 18 g7+ members.  This core group can then be enlarged in various directions, for example by including countries experiencing transitory conflict, or exhibiting high levels of climate change vulnerability with low adaptive capacity.  However they are defined, fragile states are diverse.  They are also more than usually preoccupied with their own challenges.  For both of these reasons, they have tended not to caucus or search for common ground.  The formation of the g7+ group has begun to change that; the Dili conference was another step toward building a sense of collective, if loose, identity among fragile states.

Second, in the context of MDG achievement, the most general point of commonality between fragile states is that they are all on the wrong side of the implacable average.  The eight MDGs as originally formulated were global goals.  The 21 associated targets were not intended to be applied to individual countries but, inevitably, they are so applied in countless reporting documents.  When targets defined for the average country get applied to every country, a lot of countries will necessarily get fail grades—including most of the countries represented in Dili, for most targets.  Even countries that have done remarkably well on some things in absolute terms get marked down in terms of proportional progress, simply because their starting points were so bad.  (This is one frequently-remarked problem with the MDGs, on which Terence Wood has recently written here.)  Fragile states therefore need to be able to set their own, realistic targets that are aligned with, rather than inherited from, a global framework.

Third, in discussing the more truck-sized gaps in the MDG framework, much common ground emerged.  Some countries were concerned primarily about peace-building, others primarily about climate change mitigation and adaptation (President Anote Tong of Kiribati, a core fragile state, spoke compellingly on this).  But all countries agreed on the centrality of inclusive economic growth and state effectiveness—with variations in emphasis according to whether a country’s growth depends more upon natural or human resources, or whether the quality of its government is impeded more by problems of institutional capacity or political legitimacy.  In effect, the outcome saw the concerns of the g7+ group of countries, already quite well encapsulated in the peace-building and state-building goals that were incorporated into the New Deal for Engagement in Fragile States [pdf] in 2011, augmented by the climate-centred concerns of the Pacific island countries.  The result was the identification of four goal areas requiring attention by the High-Level Panel, which can be roughly labelled inclusive growth, peace and justice, state effectiveness, and climate change.

Fourth, the discussion was not dominated by calls for aid.  Indeed, a strong theme of the conference was the need for fragile and conflict-affected countries to diagnose and take responsibility for their own problems, with support rather than direction from donors.  At the same time, there was a clear message that many of the challenges facing this group of countries can only be overcome through external or global collective action.  Most obviously, curbing greenhouse gas emissions depends upon collective action by major emitters, and adaptation to the inevitable effects of climate change will require the construction of accessible and responsive financing and advisory mechanisms at the global and regional levels.  Sustainable and equitable management of natural resource wealth in fragile states depends in part on how developed countries regulate the activities of multinational corporations.  And growth through employment depends in part on developed-country policies with respect to international labour mobility.  In these and other areas, fragile and conflict-affected countries would be beneficiaries of, much more than contributors to, progress toward appropriately-defined global goals.

Fifth, while the Dili conference was not intended to be, and was not, a technical discussion about the precise framing of goals, the formulation of targets or the selection of indicators, it did raise two quasi-technical questions.  One question is whether there should be “how” goals in the post-2015 framework, rather than just “what” goals.  The g7+ narrative has sometimes spoken of the need for “precursor” goals or targets related to peace, justice and state effectiveness.  Another question is whether there should be goals that call explicitly for global collective action.  A peace goal, for example, could in principle be defined in this way; a climate change mitigation goal, one might assume, would have to be so defined.  However, moving in either of these directions takes us away from something that is generally agreed to be the most desirable feature of the present MDGs—that they define concrete goals for human well-being to which people, or at least politicians, can readily relate.  The average person does not aspire to live in a country with competent public financial management; it’s the benefits of such management that they want.  Nor does the average person aspire to live in a world which has negotiated a particular kind of climate change agreement; it’s the benefits of such an agreement that they want.  Once you go beyond social development objectives, expressing global goals in terms of human well-being gets harder.  It might well be possible to do so without sinking into a quicksand of debates about what are the precursors or ingredients of development.  Let’s hope so, or the Dili storyline might not make it out of the foundry.

What next?  Well, Emilia Pires now has much stronger backing vocals when she goes to the next High-Level Panel meeting in Bali at the end of this month.  It seems even more inconceivable than it was previously that the post-2015 framework would omit goals relating in one way or another to inclusive growth, peace and justice, state effectiveness and climate change.  However, it remains entirely open how such goals might be articulated.  Any excessive prescriptiveness about how governments govern and function, or about the outcomes of multilateral negotiations, will quickly propel discussions into a cul-de-sac.  Maintaining focus on why things matter to people—and on the ends rather than the means—is the more promising path.  I don’t know whether the post-2015 process, as it has been constituted, will eventually produce a simple and rational outcome, or have much impact in terms of national policy-making, global collective action or the volume and distribution of aid.  I do believe, though, that Timor-Leste did something very useful by bringing together this diverse group of countries for the first time on its soil.  Fragile states are now a little less a fuzzy statistical category, and a little more an organised grouping with a shared view of their aspirations for the future.