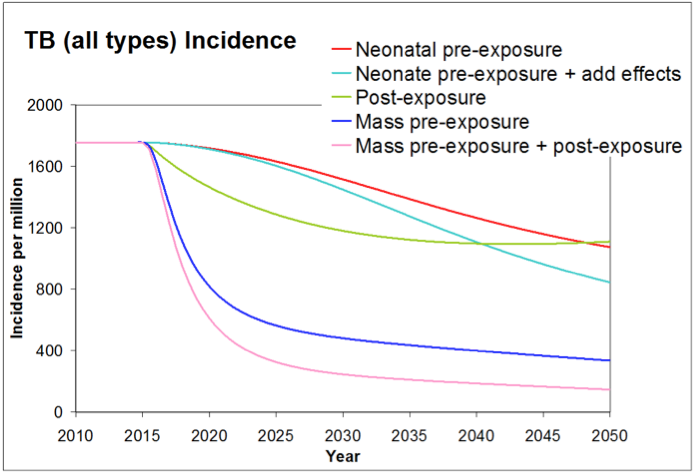 In 1921, the League of Nations handed Australia responsibility for the Territory of New Guinea as part of the break-up of German colonies required by the Treaty of Versailles.  And Irving Berlin would have been on the radio, except that public radio broadcasts in Australia wouldn’t start for another two years.

It was also the year that the current tuberculosis vaccine was first introduced.

Today, tuberculosis (TB) still kills one and a half million people each year. There are nearly nine million new cases annually, and a third of the world’s population – two billion people – is thought to be latently infected. The WHO responded in the late 1980s and early 1990s by rolling out the DOTS (Directly Observed Treatment Short-Course) TB treatment programme, and have since set their goal as reducing the global incidence of TB to less than one new case per million by 2050.

The problem is that reaching the WHO goal means cutting new TB cases by 16% each year but, as WHO themselves acknowledge,  this is impossible without new and better drugs, vaccines and diagnostics. Using today’s TB tools, the annual reduction in new TB cases is far from this, at just 1% per year.

Actually, to say “today’s TB tools” is misleading. When DOTS was designed twenty years ago, the tools it incorporated were already old, sometimes ineffective (particularly in the emerging group of HIV+ patients) and clumsy: their merit was that they were widely available and very cheap.   Joel Negin is right when he observes that, ‘the tools we have to diagnose and treat TB cannot keep up with the realities of the disease.’

Diagnosing TB today still relies on sputum microscopy, a method that is 125 years old and detects only half the cases. As a result, 1.6 million cases of TB went undetected in 2008. Drug resistance cannot be detected by microscopy at all, and requires sending sputum samples to a hospital laboratory, a process that can take up to six weeks.

The only vaccine is the 90 year-old Bacille Calmette-Guérin (BCG) vaccine.  It is effective against severe forms of TB in young children but provides little or no protection against adult TB, which accounts for 80-95% of the global disease burden (see this paper for more [pdf]). It also cannot be used for children with HIV, although they are 20-40 times more likely to contract TB than children without HIV.

No new TB drugs have been developed in the last 50 years. The standard DOTS treatment regimen – which involves taking a combination of four drugs every day for six months under direct supervision – can interact with common HIV drugs and has a high failure rate in HIV patients.  Patients often fail to complete this half-year long daily treatment due to weak health systems, drugs being out of stock in local health care centres, difficulties in visiting health centres over many months, or simple human nature:  how many of us have stopped taking our antibiotics when we feel better?

Unfortunately, the result of poor DOTS compliance is the burgeoning growth of multi- and extensively drug-resistant strains of TB (MDR-TB and XDR-TB). Treating MDR-TB requires a different, more expensive and far less successful toolkit of second-line drugs. These are staggeringly (up to thousands of times) more expensive than standard therapy, commonly involve daily injections for two years or longer and, at the end of it, relapse rates can be as high as 40%. XDR-TB is resistant to even these second-line drugs, with 70% of patients dying within a month of diagnosis.

Some estimates [pdf] suggest PNG’s Western Province may have one of the highest proportions of MDR-TB in the world, and the Torres Strait Islands could potentially act as a gateway for MDR-TB into mainland Australia – where indigenous Australians are already eight times more likely than non-indigenous to contract TB. AusAID is heavily involved in efforts to combat the spread of MDR-TB in the cross-border region, largely by strengthening health systems in PNG.  But all these efforts are limited by the tools available.

Changing the rules of the game

In its present form DOTS puts a huge burden on patients and health systems, who have no choice but to comply with a clumsy and lengthy treatment built around 20th (or even 19th) century tools. The good news is that new TB tools are on the way.

One of the most cost-effective public health tools and the supreme game-changer is a new and more effective TB vaccine.  Even a 60% effective new TB vaccine would have a dramatic impact – such a vaccine, even if given only to infants, is expected to reduce the number of new cases of TB by 40%.  With mass vaccination, and addition of a post-exposure vaccine, the expected reduction in new cases of TB would be greater than 90%.

Ten years ago, there was only one TB vaccine candidate in clinical trials in humans. Today there are twelve.   The most advanced of these is now in late-stage trials (Phase IIb) with an expected efficacy of 50-70% and trial results due in late 2012 or early 2013.

New TB drugs are in development that are designed to reduce MDR-TB treatment from 24 months to 4 months and to cut standard TB treatment by over 30% (6 months to 4 months): developers are also aiming at 8-week treatment courses for new TB drugs.  Shorter treatment times increase patient compliance, reduce the chance of drug-resistance developing and significantly decrease the resource burden on overstretched developing country health systems. Modelling suggests that a four-month treatment course could prevent over 8 million cases of TB and 2 million deaths by 2050 in South-East Asia alone.

New TB diagnostics are also on the way.  The Xpert MTB/RIF, available since last year, can diagnose TB in patients with HIV, as well as detect drug resistance in two hours rather than six weeks. One of these devices will be soon be in use in PNG as part of AusAID’s recent $8 million commitment to tackling TB in Western Province. But it is very expensive, even at concessionary pricing ($17,000 per machine and $17 per test) and unsuitable for remote areas that lack a reliable electricity supply.  Newer TB tests are likely to be more suitable, with several expected to be introduced by 2015. Two are cheaper versions of an Xpert MTB/RIF type test; and two are point of care diagnostics so that TB patients can start treatment at the clinic where they first present with symptoms.

Bringing these new tools to registration will require additional funding. Developing a new vaccine, for example, can cost up to $800 million over 10-15 years, and becomes more expensive as products go into late-stage trials; in order to safely register one of the above TB vaccine candidates for developing world use, it will need to be trialled in tens of thousands of people in countries with high TB incidence. This funding will need to be provided by donors in high-income countries. But overall government funding for neglected disease R&D is now falling, not rising, and this trend seems likely to continue (with ongoing financial woes amongst many of the traditional donors). With our financial situation relatively secure and our aid budget growing, Australia should be contributing to this task.

We can ask the people of PNG and their health services to continue to struggle with out-dated and ineffective tools. We can keep pouring Australian Government funding into TB programmes and TB tools that cannot keep abreast of the growing challenges of HIV-TB and drug-resistant TB in our region, and that WHO itself has acknowledged cannot meet global TB targets.

Or AusAID can put a tiny percentage of its current health spending into the global effort to make new TB tools: tools that will shift TB management to an end-game strategy and, while that shift is happening, will give countries and patients tools that better match the reality of low-resource settings and limited access to health care.

To date, AusAID has not contributed to the global effort to develop new and better drugs, vaccines and diagnostics for neglected diseases, including for TB. This looks set to change with the then Minister’s acceptance of the Aid Effectiveness Review recommendation that AusAID start investing into this area. As part of developing this new investment strategy, we encourage AusAID to look seriously at including TB – a far greater regional killer than either malaria or HIV and a significant cost to AusAID and its recipient countries.

We also encourage AusAID to dedicate a realistic sum to the new R&D strategy, a sum that reflects the high cost of developing new products and is consistent with the efforts of other donors.  A good start would be to double AusAID’s health research budget – which is currently focused on population and health systems research – by setting up a new stream to fund R&D for new products. This would mean committing an additional $20 million per year to product R&D for the next five years – a fraction of the $721 million that AusAID will spend on health in 2012-13 alone.

The time is well overdue.