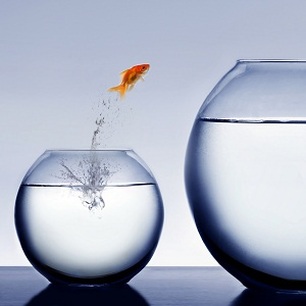 Two dogmas of development financing: aid to the transition countries

Does transitioning from low- to middle-income country (MIC) status reduce a country’s access to aid? In some cases, one would hope so. In many other cases, this would be a bad outcome. The returns to aid investment in that country might be higher than elsewhere, or it might be unable to replace lost aid with domestic resources or less concessional external finance.

As was noted in the first post in this four-part series, there is a view abroad that MICs, or at least some significant number of them, are indeed experiencing a loss of aid without commensurate increases in other forms of finance for public investment. However, an examination of trends in aid to the 27 non-LDC countries (other than China and India) that have graduated from low- to middle-income country status since about 2000, which are here called the ‘transition’ countries, does not bear out this view.[1] More exactly, it does not bear out the view that these countries, considered collectively, have yet begun to lose aid. That hardly implies, of course, that they face no public financing gaps.

As illustrated in the figure below (purple graph), the total dollar amount of Official Development Assistance (ODA) provided to the transition countries has increased fairly steadily in real terms, aside from a spike related to debt relief in the 2006-07 period. 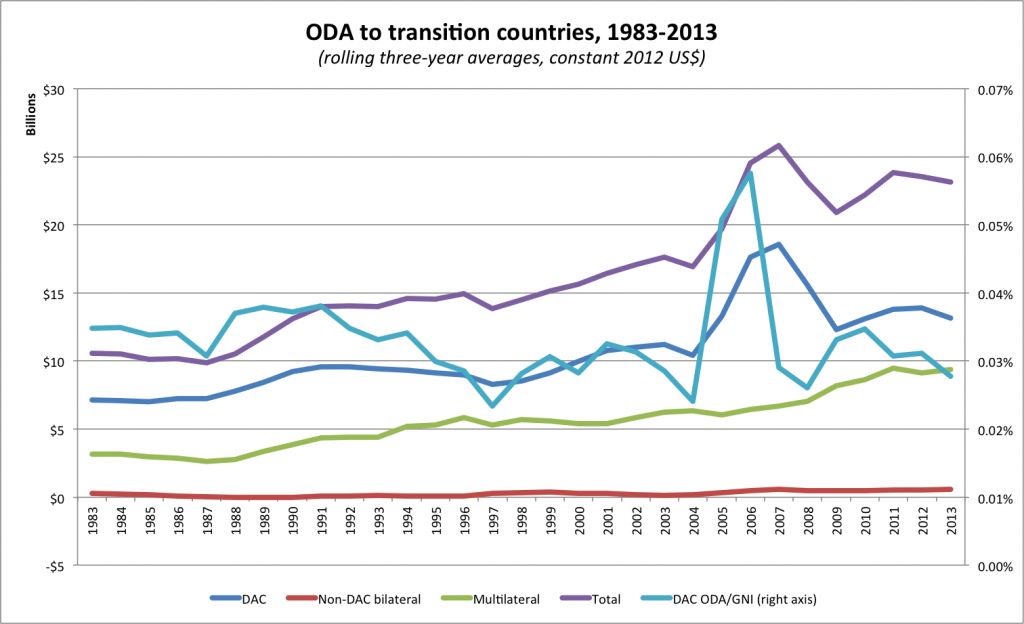 Total aid to transition countries doubled from about US$11 billion three decades ago to about US$23 billion in 2013 (2012 prices). As a proportion of DAC countries’ combined GNI (pale blue graph above, right axis), ODA to transition countries has long oscillated around 0.03%, compared with about 0.1% for LDCs in 2013 or 0.05% at the bottom of the LDC aid trough that bottomed out in about 1999 (see previous post).

Viewed in share-of-ODA terms, aid to transition countries would show quite a strong decline if China and India were included in the baseline. However, with those two countries excluded, the transition countries’ share of multilateral aid has remained in the 23-25% range since 1999. Their share of DAC bilateral aid, at about 15%, is well below its three-decade peak of 20% but has been stable since 2009. Their share of total aid (purple graph below) has fallen since 2007, but not by much—from just over 20% to about 17%.[2] 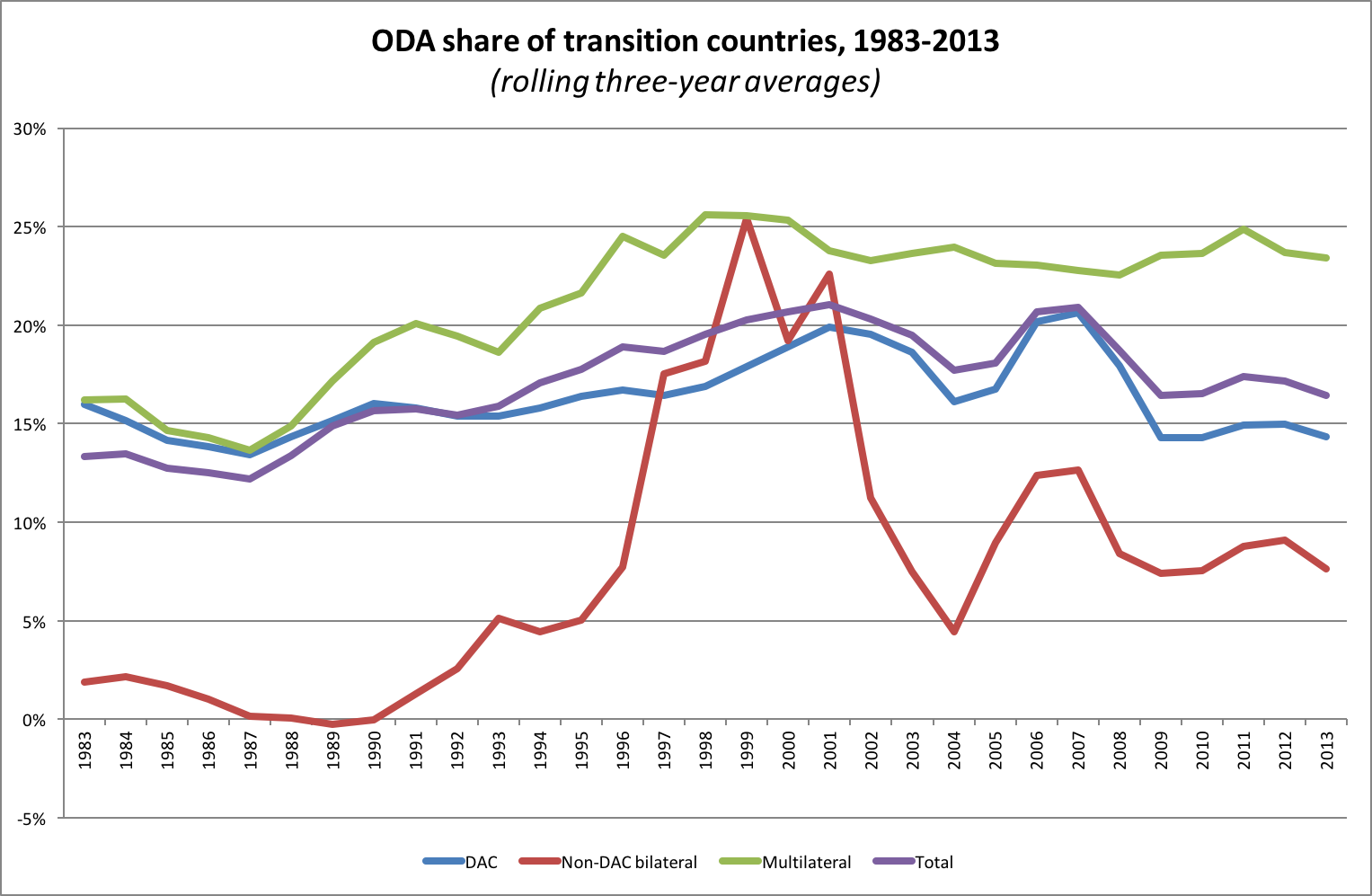 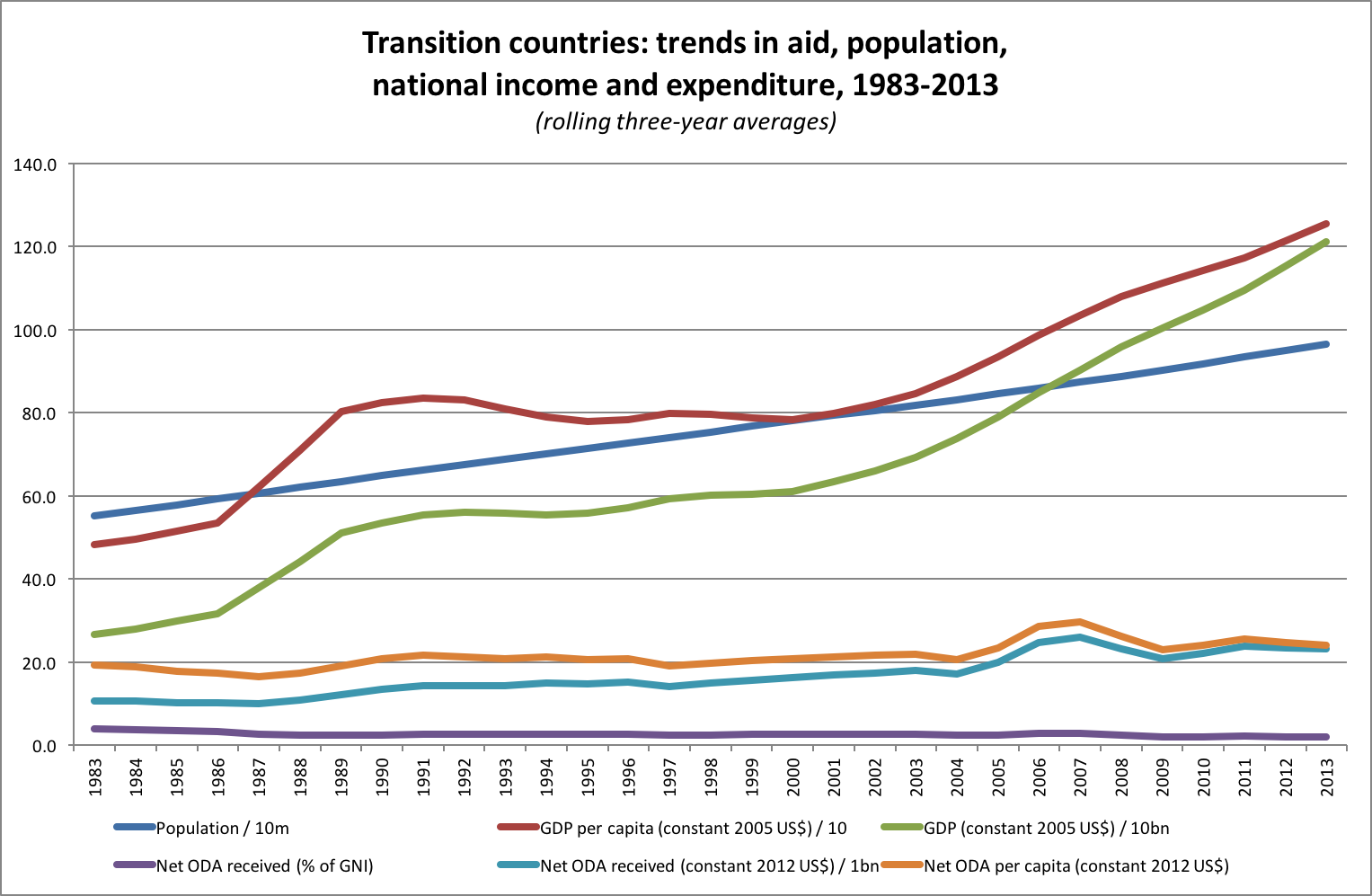 It should be noted also that aid has been maintained at a steady 35% or so of aggregate recipient government consumption expenditure in the transition countries since 2010, and has exhibited stability against the combined GNI of the transition countries, hovering at around 2%. While that may seem a low percentage, it is conventionally used as a threshold for distinguishing between low and medium levels of aid dependence.

The MICs in general, including those in the upper MIC band and the longstanding MICs in the lower MIC band, still received a little more aid than the LDCs in 2013, in a ratio of about 1.2 to 1, but that ratio had been above 2 to 1 at various times in the preceding decades, particularly around the time of the LDC aid trough. In fact, if one discounts a spike related to the Indian Ocean tsunami response and exceptional debt relief for several countries in the 2005-07 period, it appears that the MIC/LDC aid ratio increased steadily from 1.3 to 1 in 1987 to 2 to 1 in 1999, then declined toward parity, approximately reaching it in 2009 and approximately maintaining it since that year. On the MIC side of the ledger, the transition countries and the longstanding MICs share about equally in total ODA to MICs, though over the long term there has been a slight upward trend in the share of today’s transition countries. Thus, over the long term, the MICs have ceded some ODA share to the LDCs and the transition countries have borne about half of the associated pain. They have not, however, seen any loss of aid in real terms.

In sum, it seems that the transition countries, like the LDCs, are not at this point losing out in the aid allocation game. They, along with the longstanding MICs, have lost some ‘market share’ to the LDCs over the years, but in the context of substantial increases in ODA supply. Interestingly, given that some multilateral sources of finance apply quite rigid income thresholds in determining eligibility for concessional financing, aid to the transition countries from multilateral sources has so far held up well. It could be that there is a simply a lag owing to the continuation of disbursements against old commitments. Aid losses might be coming down the pipeline.

It’s also possible, though, that that the ODA impact of acquiring MIC status has been overstated. The majority of ODA flows might be less sensitive to the crossing of the LIC/MIC threshold than has often been assumed, and MICs might be finding new options to access grant finance: for example, to soften the terms of non-concessional loans in exchange for helping to produce global public goods, such as climate change mitigation.

None of the above is to suggest that transition countries generally have access to adequate levels of finance for public investment, particularly in infrastructure and social protection. There is a strong case for increasing international support for this group of countries, which contains about one billion people with an average per capita income a smidgin above the LIC/MIC threshold. The point here is that any additional financing that they are able to access would not at this time be replacing lost ODA, at least not at the level of the transition country group as a whole. The task is rather to protect and enhance aid flows to the transition countries.

The fourth and final post in this series will reflect on the findings presented here and in the previous post, and propose the establishment of specific aid volume targets for the LDCs and the transition countries—with a view to protecting and consolidating their current positions rather than compensating for aid loss.

This post is the third in a four-part series on development finance flows to least developed countries and transition countries. You can access all the posts in the series here.

[1] Trends in aid to the LDCs, including middle-income LDCs, were considered in the second post of this series. The 27 transition countries were listed in note 2 of the first post of this series. China and India are excluded from the transition country category for present purposes not only because they swamp all other MICs but also because even people who think there is a continuing role for ODA in one or the other of these countries do not call for much of it.

[2] Non-DAC bilateral aid to the transition countries has been more volatile in share-of-ODA terms but the absolute amounts are relatively small. Even when the share peaked at 25% in 1999, the amount was only US$480 million. In 2013, when the share was around 8%, the amount was about US$520 million. These figures, however, relate only to amounts voluntarily reported to the OECD by a subset of non-DAC donors, and do not include what are assumed to be large concessional flows from China and, to a lesser extent, India.