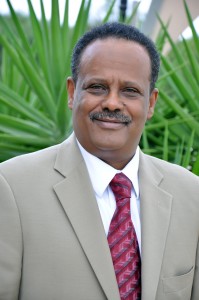 Tewodros Melesse is the Director-General of the International Planned Parenthood Federation (IPPF), a federation of 152 national member associations, working in 170 countries, focused on achieving universal sexual and reproductive health and rights (SRHR). During a recent visit to Canberra, he spoke with Camilla Burkot about IPPF’s work in the Pacific and around the world. You can listen to the podcast here [34 mins] and read the full transcript here [pdf]. For a summary of their conversation, read on.

We began by chatting about IPPF’s global structure and mission, and then delved into the role that its member associations play in the Pacific – a region with some of the world’s poorest outcomes for sexual and reproductive health and rights (SRHR), particularly amongst adolescents [pdf]. Tewodros described the comprehensive services that IPPF members provide in the region, which extend far beyond basic family planning:

We work in partnership with government agencies, with the private sector, and also with non-government organisations. For example, in Solomon Islands we work with the Catholic Church; in Fiji we work with the police and the maritime agency to ensure that women’s rights are respected, gender-based violence is criminalised and taken to court, and that counselling services are provided for affected girls and women.

I asked Tewodros to elaborate on the significance of a rights-based approach in discussions of sexual and reproductive well-being, which is too often over-simplified as a ‘health issue’. He explained that rights should not be thought of as “an abstract literature”, but come down to respect for individual and informed choices. For example:

Rights are knowing what the issues are, appreciating and understanding them. That is really what we are talking about: giving the right information, at the right time, so that people can decide on their acts.

Thinking in terms of respect for choice, he continued, enables situating health outcomes in a wider perspective. Applying a rights-based framing also has the effect of locating men in conversations about sexual and reproductive health:

…why should a girl be persecuted? Men also should know their responsibility in this engagement.

When I asked Tewodros for his appraisal of how SRHR is figuring into the post-2015 sustainable development agenda, he conceded with a smile that “it’s always easy to speak once you get the results” (we spoke on August 13 – just ten days after the draft outcome document for the Sustainable Development Summit was formally agreed). He went on to explain that SRHR is central to achieving sustainable development:

50 per cent of the world is composed of women – but if we don’t respect and empower women, how are we going to have economic development, social justice, equity?

While lauding the inclusion of targets related to women’s empowerment (SDG 5) and universal access to health care (SDG 3) in the SDGs, he acknowledged the real challenge for IPPF and others now lies in implementation:

But now this is a universal agreement; how is it going to be translated into national budget allocation? National legislation? A nationally conducive environment for this to be applied? That is what we are going to be working on…

Part of this implementation effort must involve more sophisticated assessments of progress towards SRHR – that is, going beyond relatively straightforward family planning statistics to capture more comprehensive changes in women and girls’ quality of life and their economic and social status. The question of social status, and of cultural norms coming into conflict with universal SRHR, is an issue with which IPPF and its member associations are acutely familiar. However, Tewodros suggested that these are barriers that can be surmounted with the appropriate re-framing and engagement:

Who in society – at least in theory – would say a woman should die? None. Which is the society that says women should live in slavery? None. Which is the society that wants to leave his or her daughter or his mother to die in giving life? None. But the interpretation and the understanding of the issues sometimes – because of the language, sometimes the contextual presentation – can be different and it’s a long struggle. And our approach is to engage community leaders.

Another key issue that I asked about is the impact of the current, unprecedented level of global human migration on IPPF’s work. After emphasising the important point that IPPF is not “opportunistic” in the sense of rushing to the scene of a crisis, but rather composed of “nationally owned” associations that work within their communities, Tewodros highlighted the SPRINT program – an Australian aid-funded initiative to train governments and NGOs in a minimum package of reproductive health services to be put in place at the onset of emergency situations:

We have managed to work in 28 countries in Africa, in the Pacific, in Asian countries, in South Asia, in the Arab world, even in Japan during the nuclear disaster – providing training for almost 8,000 people across the globe in over 95 countries to ensure that this essential package becomes government policy, and also within the Red Cross and Red Crescent societies and other non-governmental organisations. Almost 600,000 people have benefitted from this essential package of services. And we want to strengthen this; in our new strategy framework, we are setting up as one of our program areas ‘service delivery in a humanitarian setting’, to ensure that the voices of these people – what one might call ‘the voiceless’ – are heard nationally, regionally and internationally.

Lastly, I asked Tewodros to articulate what is, in his view, the greatest challenge that IPPF faces as a global SRHR movement:

Ultimately, pursuing universal SRHR and improving the quality of life for individuals can have far-reaching impacts:

This is an issue of fundamental importance. We care about individual lives, not about the numbers only. We care about that important component of the confidence that people should have in themselves and their community, in their nation. That’s what is important. It is critical. Unless we have that and we work towards that, whatever we say is not going to take us far.

Camilla Burkot is a Research Officer at the Development Policy Centre. Tewodros Melesse is Director-General of the International Planned Parenthood Federation.

Tewodros Melesse is the Director-General of the International Planned Parenthood Federation (IPPF).