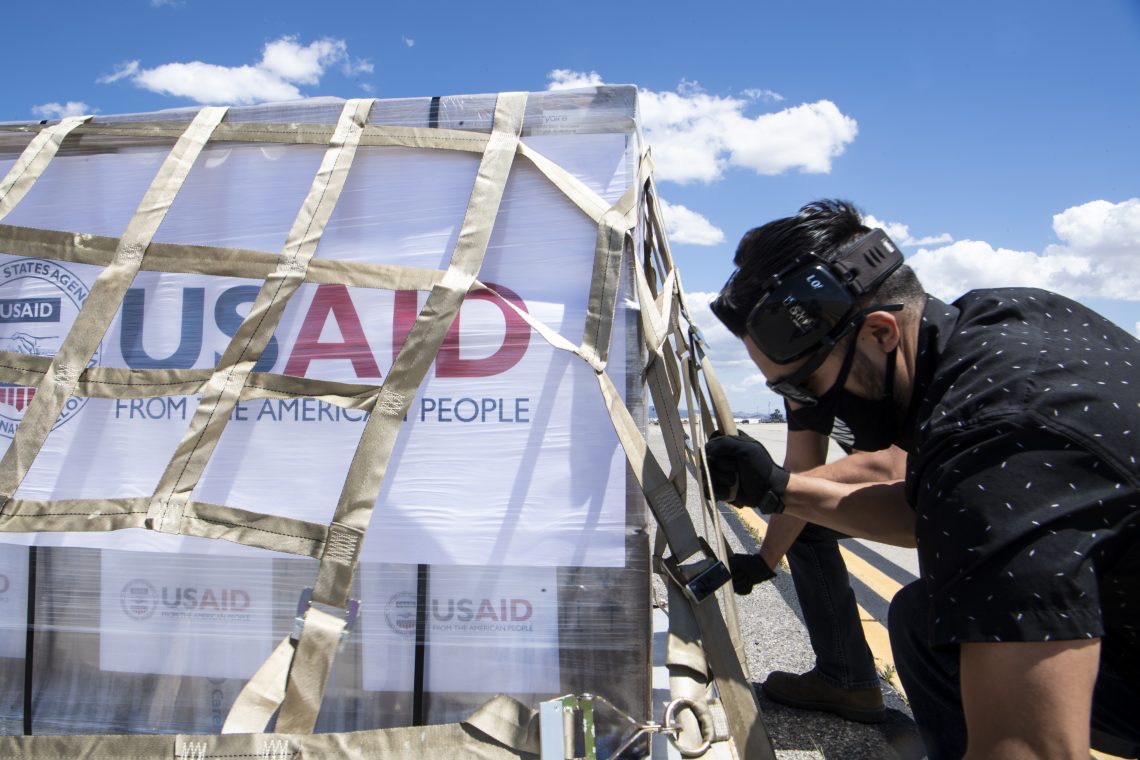 By May, USAID had distributed nearly US$900 million in aid to 120 countries (US Air Force/Staff Sgt Keith James/Flickr CC BY-NC 2.0)

President Trump’s lack of leadership in the international fight against COVID-19, taken to the extreme by his decision to leave the World Health Organisation (WHO) in the midst of the greatest global health emergency in a century, has damaged the reputation of the United States worldwide. This is sad on a number of levels. Not only has the United States, a global power that much of the world once looked to for guidance in times of crisis, essentially opted out of this role, but the US executive’s failure on this issue also overshadows the actions of other branches of the US government and private citizens who have stepped up to the challenge of containing and rolling back this disease.

Seemingly to deflect attention away from the way in which he has bungled the COVID-19 crisis, President Trump has sought to leverage the worst instincts within the American electorate – xenophobia and isolationism.

Trump said he was withdrawing money from the WHO because of its ‘deadly’ subservience to China and its purported unwillingness to share information on COVID-19 during the early stages of the pandemic. These allegations are, at best, oversimplifications of a highly a complex issue and, whatever their reality, put the United States out of step with both China and its traditional European allies, both of whom reaffirmed their commitment to working with the WHO at this time of dire need.

The impact of this on the status of the United States as a global leader can only be negative. While the world watched Trump childishly refer to COVID-19 as ‘kung flu’, China was busy sending face masks, test kits, ventilators and medical personnel to help combat outbreaks around the world. No one is saying that China has dealt with this crisis perfectly, but this so-called ‘mask diplomacy’ has gone a long way to combating early failures, earning appreciation the world over and outright praise from Germany, a major US ally. Trump’s ‘blame it on the foreigners’ approach (and it’s not the first time he’s used it) may be the best card he has to play at the next election. With unemployment pushing levels rivalling the Great Depression, and the entire country wracked by race riots, Trump’s opinion polls and image abroad are both at rock bottom.

Trump’s erratic behaviour and nationalistic attitude sadly overshadow the remarkable work done by other branches of the US government since the outbreak of the pandemic. The military, State Department, USAID, some members of Congress and individual Americans have all shown the better side of America. Since the outbreak began, the United States has provided more than US$400 million in emergency assistance to Africa specifically aimed at fighting the pandemic. As of May, USAID has distributed nearly US$900 million in aid to 120 countries to assist them during this difficult time. The list of private donors and institutions that have pledged billions to efforts against the pandemic is dominated by American names. Not to downplay the efforts of Alibaba founder Jack Ma, but at present private philanthropy is still an area in which the United States is a world leader.

Putting aside for a moment its international reaction, the US response to the virus has also been uneven domestically. As of 9 July, the United States had over 3,000,000 confirmed cases of COVID-19 and more than 350,000 deaths. China with a population nearly four times larger has had just 84,992 cases and 4,641 deaths. For all its bluster about the fault of foreigners and the WHO, this is not exactly a ringing endorsement of the Trump administration’s ability to keep its people safe.

The contrast between the actions and attitudes of the Trump administration (which has proved unable or unwilling to deal with the reality of COVID-19) and those of the US government and private sector (which have been quietly providing funding for global health assistance), though more marked now than at any time in recent history, predates Trump. The United States has historically been both an essential donor to, and harsh critic of, the United Nations, for example. Americans are proud of their support of good causes throughout the world, and indeed in my own country, Timor-Leste, it is not uncommon to come across a tap-stand or a school building emblazoned with the USAID logo – from the American people (husi povu Amerikanu). It is unfortunate, especially at times like this, that this is not the side of the United States that most people are seeing.

President Donald Trump’s actions have greatly damaged the United States’ image. However, while the damage is severe, it is by no means irreversible. If we step back and look at what America and Americans have done in response to COVID-19, there is a lot to be proud of. These positive actions have, unfortunately, been completely overshadowed by their president and his appalling willingness to deploy racist and nationalistic words and actions to appeal to his own limited electoral base. In contrast, Beijing has been fairly effective at publicising its good deeds and has benefitted from having a more disciplined leader. Actions, it seems, don’t always speak louder than words.