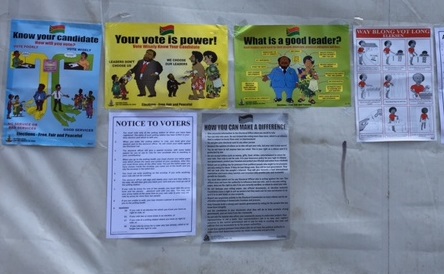 The people of Vanuatu went to the polls on Friday January 22 in a snap election that was occasioned by the dissolution of Parliament at the end of last year. This in turn was a direct result of a period of political impasse further to the imprisonment of 14 government MPs on conviction of bribery in October. This year was always going to be an election year for Vanuatu, however the vote was scheduled to take place later, most likely in October.

This post contains some preliminary analysis that is based on the unofficial results as they currently stand. Official results will be compiled and released by the Electoral Office in coming days.

The elections were conducted in a very orderly, peaceful and professional manner. The campaign period was active in the community and the media, including social media. This should not come as a surprise to anyone as that is pretty much standard practice in Vanuatu, with only isolated instances of serious electoral misbehaviour in its nearly 36-year history.

The somewhat peculiar circumstances that presaged these elections led to an outbreak of observers’ missions (Commonwealth Secretariat, Pacific Islands Forum, Melanesian Spearhead Group, DFAT, EU and possibly others). It was very disappointing to see that, in general, these groups did not coordinate their efforts (e.g., by scheduling joint pre-election briefings) in order to minimise the impact that they had on Vanuatu systems, and appear to have little or no intention of combining their feedback to the new government by preparing joint reports or summaries of observations and recommendations.

January is not a usual time for elections in Vanuatu, partly because it is in the middle of the cyclone season and also because many people (especially those who live in urban areas) are away on holiday visiting families in outer island communities. There was some concern expressed ahead of the elections and on Friday that this had contributed to a lower voter turnout than we saw in 2012.

Although the number of overall candidates was markedly lower than in 2012, at 261 down from 345 (contesting for 52 seats), the number of parties was higher at 36 and there were more independent candidates standing (68). Some of the parties were very newly formed, having been established only when the election was called. The number of women candidates was very small, with only nine standing. None of them, as things currently stand, have been elected, which is disappointing but not particularly surprising.

The preliminary results are available here and a breakdown of the seats as secured by parties is here. In terms of who is in and who is out, much is as expected, although there are certainly some significant surprises. The former Minister of Justice, Robert Bohn (the only one of the 15 accused last year to be acquitted), lost his seat on Epi, and on Pentecost the same fate befell the veteran politician and former prime minister Ham Lini. The next Parliament of Vanuatu will be the first not to contain a member of the Lini family since the country became independent in 1980.

One of the significant characteristics of this election was the number of candidates who were standing having already become well known in other areas of public life. The new Parliament will include a former attorney general, the leader of the national trade union (two of three brothers from the same family to have been elected), two former directors general and a former senior officer from the secretariat of the Melanesian Spearhead Group. The election campaign also saw the attempted resurgence of some very senior political actors who have not sat in Parliament for some time; none of them were successful.

The electorate appears to have, by and large, moved against the established parties. As things currently stand, the largest group in the new Parliament are the independents, with ten seats. Both the Vanua’aku Pati and the National United Party look to have lost seats, and the only party that appears to have made significant ground is the Graon mo Jastis Pati, which has increased its tally from four to six or seven (depending on the result of a seat on Tanna that is currently showing as having a tied result). This puts the Graon mo Jastis Pati leader Ralph Regenvanu (a former Minister of Lands) in a very strong position during the negotiations to form a coalition government, with some people even suggesting that he may become the prime minister.

The independents will be key to how the next government is formed. History suggests that they will not act as a bloc but are more likely to align with the larger parties either on the basis of pre-existing informal agreements, policy cohesion or post-election negotiations and offers. The same goes for the seven small parties, which have each secured one seat only.

Whilst a coalition comprising 27 is required in order to form a government, the need for stability means that 30 plus would be much more comfortable. With only 13 ministries available (as capped by the Constitution), it makes the process of negotiation to form a government particularly complex and delicate. Some of the discussions about putting together a coalition will have already taken place and many more will be ongoing, even as the results are being finalised.

Parliament is scheduled to sit on February 8 and the first order of business will be to guarantee supply, as the 2016 budget was not passed last year. Hard on the heels of this will be the need to address the issue of repair to the runway at Port Vila’s Bauerfield International Airport, further to the announcements on Friday by Air New Zealand that it is suspending flights there further to safety concerns.

Tess Newton Cain is a Visiting Fellow to the Development Policy Centre. She is a citizen of Vanuatu, where she has lived for 19 years.