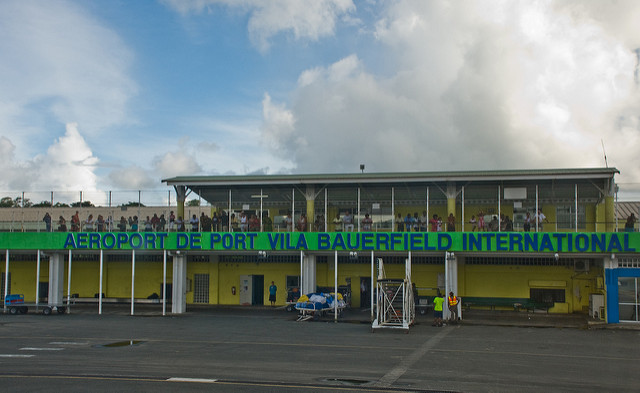 Vanuatu is the ninth most tourism-dependent country [pdf] in the world. The tourism sector accounts for between 40 and 65% of GDP (measures vary by year and source), and creates a third of all employment in the country. So the alarm caused by the decision by Air New Zealand, (and soon after) Qantas, and Virgin Australia, to cancel flights/tickets to Vanuatu in January was understandable. The decision was blamed on the poor condition of Vanuatu’s main international runway at Bauerfield International Airport in Port Vila. While Air Vanuatu, Fiji Airways, Solomon Airlines, Air Niugini and Air Calin are still running routes into Vanuatu, the lack of seats, reputational damage and, importantly, the loss of advertising by the Australian and New Zealand airlines, will no doubt have an impact on tourism arrivals.

The cancellations have come at a bad time. They follow the devastation caused by Cyclone Pam in March 2015, which left more than 70% of Vanuatu’s 277,000 people displaced. Lost output and damaged property have been valued at roughly 61% of Vanuatu’s GDP. The IMF has estimated [pdf] that reconstruction costs will add up to 40% of GDP, of which around half will be paid by the public sector. Funding the reconstruction effort was always going to be a daunting task for government, irrespective of whether the economy performed well. Without a strong tourism sector, that challenge will be all the greater.

Vanuatu has already suffered a decline in tourism arrivals in 2015 as a result of Cyclone Pam and the negative publicity associated with the disaster (not many people travel to places recently hit by a cyclone). Air visitor arrivals in 2015 were down almost 19,000 on the previous year, cruise ship arrivals were down almost 23,000. We’ve made some very rough estimates as to what this downturn means for the Vanuatu economy as a whole, drawing on a 2007 baseline study [pdf] of tourism expenditure in the country. We estimate that the decline in tourism arrivals in 2015 (note that air arrivals spend on average six times more than cruise ship arrivals) will cost the sector approximately $40 million in revenue (adjusting for inflation). That’s roughly two thirds of Australia’s total aid budget to Vanuatu, and is equivalent to about 4% of Vanuatu’s GDP in 2015.

While such declines in tourism arrivals are nothing new in the wake of disasters, fortunately they do tend to be temporary. In 2015 the Vanuatu Investment Promotion Authority flagged that it would pursue an aggressive marketing campaign to draw tourists back to the country and repair the damage to the ‘Vanuatu brand’ caused by Cyclone Pam. That recovery has now been put into question by the negative publicity associated with the cancellation of air services to Vanuatu by three Australian and New Zealand airlines. The cessation of advertising of Vanuatu as a destination by these companies will be equally damaging.

So what happened? How did Vanuatu, a country that is so reliant on tourism, fail to maintain its main international runway?

Bauerfield airport, the country’s main international airport, has been in need of repair and rehabilitation for years. Airports Vanuatu Limited, which is responsible for management of the airport, has been unable to fund major airport works using the (insufficient) fees it collects — in part due to its management of several other (loss-making) airports in Vanuatu. Poor management and a politicised board have also been a problem at various times. As a result, Airports Vanuatu Limited has been reliant on government funds (or donor funds negotiated by government) for major rehabilitation work.

There have been numerous false starts to rebuilding or rehabilitating Vanuatu’s airport, with each new government appearing to have its own opinion on what should be done. In 2013 a deal to the tune of US$350 million (involving no initial outlay by government) was struck with ‘Vanuatu Trade Development’, a Singapore-based company with no aviation experience, to upgrade Vanuatu’s airports and run them for 50 years. A change of leadership saw the proposal dumped (probably prudently), with the new government agreeing on a US$59.5 million loan agreement with the World Bank. Unfortunately, another leadership change led to this deal being squashed and the incoming Prime Minister instead pursuing a deal with a Shanghai-based consortium.

Some in Vanuatu claim that the condition of the runway is an excuse made by the airlines to cancel their services. According to this argument, the decision was actually made on commercial grounds, with the routes no longer profitable given the decline in arrivals post-Pam. An independent assessment [paywall] of the airstrip clearing it for commercial use provides some backing to this claim, but it also calls for urgent repairs in the next 12 months. Whatever the case, it is clear that the airport was in need of urgent attention; attention that the Vanuatu government failed to provide.

Underlying the indecisiveness surrounding work on the airport has been political instability. In October last year Vanuatu’s Supreme Court took the unprecedented and remarkable action of convicting more than a quarter of the country’s legislature on charges of bribery, disqualifying them from office. Attempts to pardon themselves failed, with the impasse leading the President to dissolve parliament, forcing a snap election early in 2016. This resulted in a new parliament and Coalition government under the leadership of Charlot Salwai. Mr Salwai will be Vanuatu’s eleventh Prime Minister since the country gained independence in 1980, and the fifth in less than six years, just beating out Australia as the most turbulent democracy in Oceania. This revolving door of leadership is in stark contrast to Airports Vanuatu’s line of Vanuatu having ‘a thriving economy and a stable political environment’. While political instability is not always associated with poor policy, in this case, the link is clear.

Fortunately, the seriousness of the problem has now been recognised. The new Coalition government has appointed a well-regarded Minister for Infrastructure and Public Utilities, who has taken rapid action to rehabilitate the airport runway. Short-term remediation work is already underway. Longer-term rehabilitation work is planned. This will not spare Vanuatu’s tourism industry from feeling the effects of reduced passenger numbers in the short-term.

Hopefully, in the long-term, all three of the Australian and New Zealand airlines that cancelled ticketing/flights will again begin servicing Vanuatu. Although this is by no means guaranteed, Virgin Australia has provided a good sign by indicating that it will recommence flights to Port Vila starting on 2 May. If nothing else, the unfortunate episode will hopefully be a wake-up call for Vanuatu’s political leaders. Jostling for political power is part of the game, but it should not come at the expense of good (or in this case, simply adequate) governance.

Jonathan Pryke is a Research Fellow in the Lowy Institute’s Melanesia Program. Matthew Dornan is Deputy Director of the Development Policy Centre.

This post is republished with permission from the Lowy Interpreter.