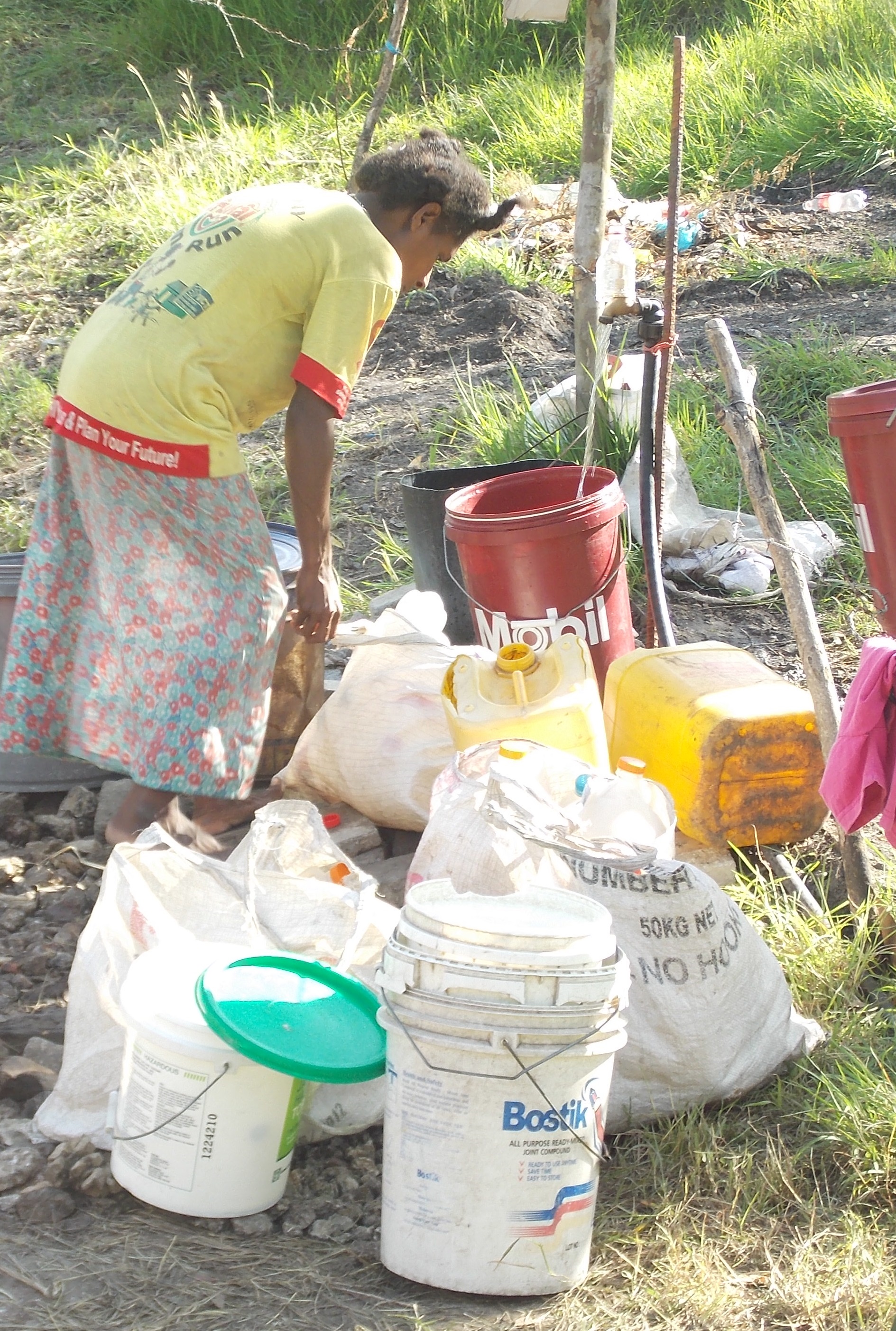 ‘Water is life’ was a common response to questions I asked during my PhD fieldwork about the major challenges people faced in their day to day lives in a Port Moresby settlement in Papua New Guinea. This view is also reflected in a World Bank report published in 2014. And on World Water Day 2016, WaterAid noted that the costs and scarcity of improved water supply in Port Moresby’s settlements are so high that many low income people spend a significant amount of their daily earnings on it. With few settlements connected to public water mains, poor people often have to choose between consuming less water and resorting to unhygienic sources of water.

As the largest urban centre in the Pacific, Port Moresby faces particular challenges with water. To achieve the SDGs, development policy makers need to urgently address this issue. The connection between a holistic approach to water resources and urban development is a global concern, which was highlighted recently by Kitty van der Heijden in her keynote address at the Australasian Aid Conference (AAC) in February 2016. Kitty emphasised how, as the world becomes increasingly urbanised, the future of our common humanity will be influenced by how we design and manage cities. She discussed how the three pillars of our system – the ecology, the economy, and equity – are interconnected. Furthermore, in order to bring people out of poverty, the global demand for water will not only include drinking water, which makes up a very small percentage of demand, but also manufacturing, irrigation, livestock and electricity. During times of scarcity, poorer people will lose out if they have to compete with more powerful actors driving other demands for water. Prominent scholars like Matthew Gandy and Erik Swyngedouw have, from a variety of perspectives including urban politics, political ecology and social justice, drawn attention to the connection between urbanisation and water.

These messages resonated with my PhD research, in which people’s stories of survival in an urban setting are entangled with changes in the city and its broader political economy developments. Importantly, water emerges as a central theme in their day to day lives and as a broader political issue.

Port Moresby’s water challenges are multifold. Ecologically, as a UNHABITAT Moresby Climate Change Vulnerability Assessment notes, Port Moresby’s average annual rainfall is lower than the rest of mainland PNG. It has a seasonal rainfall pattern in which the water level at the Sirinumu Dam – the only dam supplying water to the city – is at critically low levels for several months of the year. The recent drought in PNG has exacerbated this. Another challenge is PNG’s land tenure system. The Sirinumu Dam is located outside the city boundary on customary land. The owners regularly demand compensation from city authorities for the use of their land to host the dam. These demands often involve threats to close down the dam if their demands are not met.

In terms of economic development, in recent years the city has made progress in the construction and business industry. This has created employment, which is good for people’s livelihoods, but these economic developments also create additional demands for water to service industry.

All of these factors – water scarcity, a contested natural resource dependent on the goodwill of customary landowners, a developing city and a growing population, combined with an old water supply infrastructure – create challenges for water governance. The water utility, Eda Ranu, oversees this governance and must charge fees to consumers to raise the revenue it needs to maintain the costs of supplying water.

In this context, sustainable and equitable access to water is an ongoing concern. With over half of the city’s population living in urban, traditional villages or in informal settlements, the political economy of water provision will profoundly shape how the city evolves as people try to overcome water scarcity. As discussed in this paper [pdf] Papua New Guineans are adept at devising strategies to address hardship in urban life. The provision of water to urban villages and settlements provides another illustration of such strategies, wherein the state and the water utility, working as formal entities, work with communities living in ‘informal’ urban settings to deliver water.

At the practical level Eda Ranu faces immense challenges in delivering water to urban village and settlement communities. Illegal connections and non-payment of bills lead to shortfalls in needed revenue to maintain water supply services. One example of the way that Eda Ranu works with some communities is to provide water up to a common water meter chamber so it can monitor water usage and issue a bill to the community as a whole. The community, through its locally established water committee, then arranges to install pipes and water standpipes throughout the community. Community representatives may approach politicians or undertake their own fundraising to pay for the installation of local infrastructure. Fees within the settlement have to be collected by the water committee to pay the Eda Ranu bill and help maintain the local infrastructure. When the Eda Ranu bill is issued, the committee must pay on behalf of the community using the fees it has collected. This kind of local water governance is highly varied across settlements and depends very much on the social organisation within the settlement.

Thus, in terms of equitable access to water in the city, urban village and settlement communities differ markedly from other city households in that their challenges in accessing water involve two layers. The first, as outlined above, involves local community governance. At this level the community needs to organise itself to appoint trusted representatives; negotiate with Eda Ranu and politicians for piped water to be provided to the settlement; collect fees; maintain local infrastructure; and ensure Eda Ranu bills are paid on time. This is a collective challenge and relies on successful, local, social and institutional organisation. The second layer of challenges occurs at the household level where, for the poorest families, the cost of water can be prohibitively high. Many people cannot pay their share of fees, which leads to shortfalls in the local revenue collected to pay the community bill. During the rainy season many people harvest water from their rooftops into drums near their homes and the water fees collected are lower.

Some of the greatest hardship arises when the community is not able to pay its bill and the water is disconnected, leaving the entire community without water. This can also cause tension in the community as people struggle to afford water or argue over who should pay bills. Meetings have to be convened and fees have to be collected from people in order to pay the bill. Lobbying of members of parliament for support to pay the bill is often an option.

Politically, these local dynamics feed up into the political economy of the city, and in recent years Port Moresby has seen a growth in the efforts of political representatives, usually with Eda Ranu, to install water infrastructure in communities. Thus water is central to local and city-wide political considerations. People living in settlements are aware of the resource and political constraints faced by Eda Ranu and politicians, and they place water as a high priority. As some people noted: ‘we can live without electricity, but we cannot live without water’. People also know that election candidates can win their votes based on promises of delivering water to their communities, and that promises are usually forgotten or only partially delivered.

In this challenging context, development partners such as churches and NGOs, like WaterAid, World Vision, and Anglicare, working with local institutions, provide important catalytic support to local communities. For example, in one local school, I observed that given the difficulties of water supply, the community, their local church representatives, and their church’s city parish office collaborated with two NGOs to install a water tank that harvested water from the church building. The school, which was also located on the church grounds, was able to access the water. The impact of this collaborative effort extended beyond water supply because it also enabled around 100 children to continue attending school in the local community. For poor families, this was more affordable than paying transport costs for children to attend the city schools and was also safer for younger children. This example also illustrates how NGOs collaborate in ways that are sensitive to local social and political contexts and the use of existing community infrastructure to harvest water in a sustainable manner.

A holistic approach to addressing the water needs of poor people living in Port Moresby’s urban villages and informal settlements, and to achieving the SDGs, will require policy efforts to diversify the city’s water supply, improve infrastructure, and engage with local and city actors and institutions. Efforts will need to focus on reaching a sustainable balance between the ecological realities of Port Moresby, economic and job creation priorities, and equitable access to water for all residents in the city. This needs to be done in the context of the city’s political economy. Catalytic interventions that consider seasonal rain patterns and draw on global best practices are also important. In the absence of holistic urban planning that places water at its apex, improving our understanding of how local and city actors adapt and respond to overcome water problems can provide insights for targeted policy interventions. The most important actors are local communities who are committed to seeing their lives improve and who work with very few resources to support their own communities. As urbanisation grows, our collective future and aspirations towards the SDGs will require us to place water front and centre of urban planning.

Michelle Rooney is a Research Fellow at the Development Policy Centre. This blog post draws on a chapter from her PhD thesis, which engages with literature from political ecology.