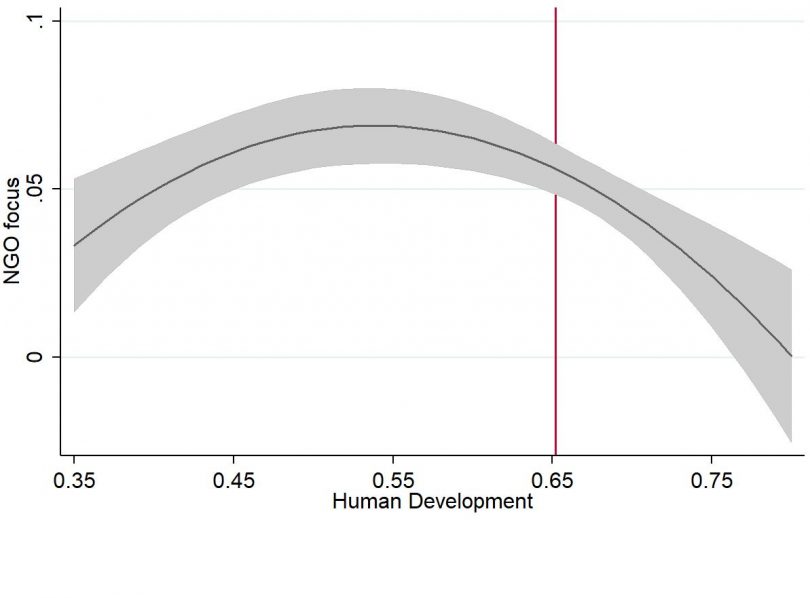 Need and the focus of Australian NGOs

If you’re an aid NGO, government money is tempting. It affords the chance to help more people, or to help people more. It can free you from the hardscrabble work of fundraising. But government funding may come at a cost: influence. Overtly or subtly, government money may start shaping where you work and what you do.

Or it may not.

Whether money buys influence is ultimately an empirical question. The sort that should bring researchers rushing to the rescue, waving reports replete with answers. Frustratingly though, the question of whether government funding routinely influences NGOs’ work isn’t easy to answer. Influence can be subtle. And democratic governments don’t usually broadcast their attempts at exerting control over non-governmental organisations.

One way of looking for signs of government influence over development NGOs is to study where they work. If – once we’ve accounted for the impacts of other factors such as proximity or population – we find NGOs mostly work in places that are economically or strategically important to their home country, it may suggest government influence. Similarly, if – after the effects of other factors are taken into account – we find NGOs mostly work where their government spends its non-NGO aid, it may be evidence of influence.

This isn’t the type of research that produces definitive answers – it’s a data dig done in search of possible clues. It’s also how researchers have tried to gain a better picture of what influences NGOs internationally. (For three good but paywalled examples see here, here and here.)

While this type of analysis exists for some other donors, no one has ever studied Australia. However, thanks to the transparency of the Australian Council for International Development and its members, I have been able to examine Australian NGOs’ work overseas. As part of this study, I looked at where Australian NGOs work, including whether their focus was suggestive of government influence.

If you want to carefully inspect what I’ve done, read sections 3, 4.5 and the second appendix of my recent Devpolicy Discussion Paper, Australian NGOs Overseas. In the meantime, here are the key takeaways from what I found.

I found no evidence whatsoever that, on average, Australian NGOs focused more on countries where the Australian national interest is probably higher. The proxies I used for national interest were imperfect (read the paper) but they are the standard ones used in existing research. And some studies from other countries have found clear correlations using the same proxies.

These are encouraging findings and contrast with more negative results from some other donor countries. They raise a question through: what actually does drive the focus of Australian NGOs? When I looked at this, I found that some predictable factors do: NGOs focus more on closer countries, for example.

Human development and the focus of Australian NGOs 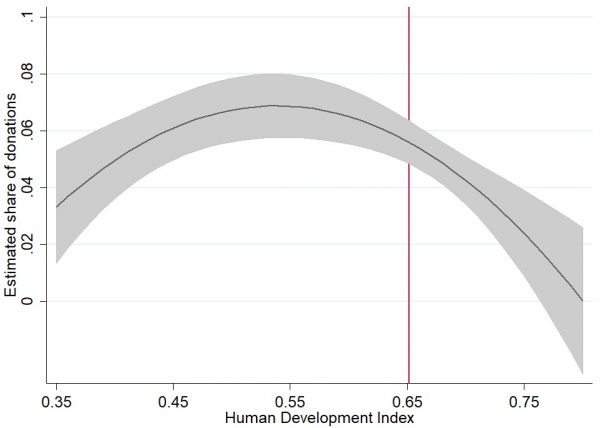 On the right-hand side of the figure you can see that as human development gets higher, the focus of NGOs falls. To put it another way, NGOs typically focus more on needier countries. This is a healthy relationship, obviously. However, there’s also something strange to be seen on the left-hand side of the figure. The line of best fit on the left also slopes down, indicating Australian NGOs focus less in the countries with the lowest levels of human development. (By lowest I mean very low, well below the median developing country.) This is a puzzle, although it may have a simple explanation: there aren’t many countries with very low levels of human development. Most aid recipients have human development scores above 0.55, and Australian NGOs tend to focus much more on the neediest of these countries.

That leaves us with good news for the Australian aid community: there are no clear signs that government funding unduly influences where Australian NGOs work. On the other hand, recipient country need has a clear influence.

This isn’t the final word on government-NGO relationships in Australian aid, but it’s encouraging nonetheless.

This post is the second in a two-part series summarising Devpolicy Discussion Paper 94 Australian NGOs overseas. You can find the first post here.