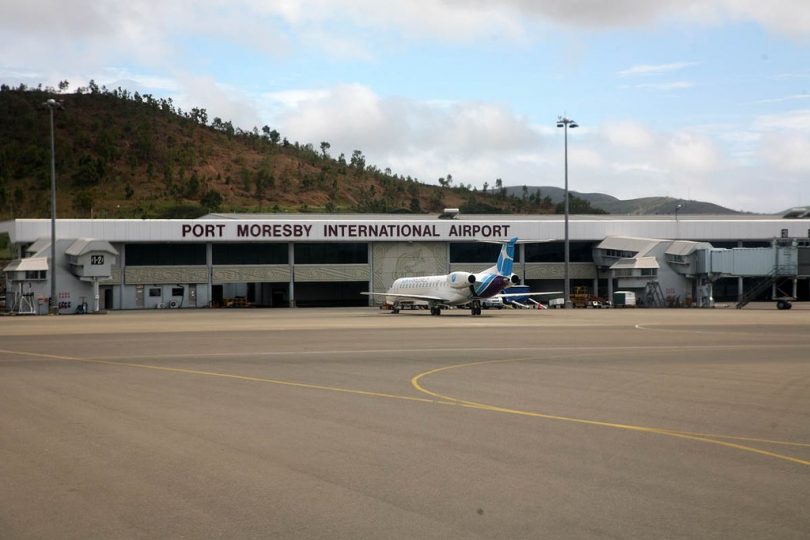 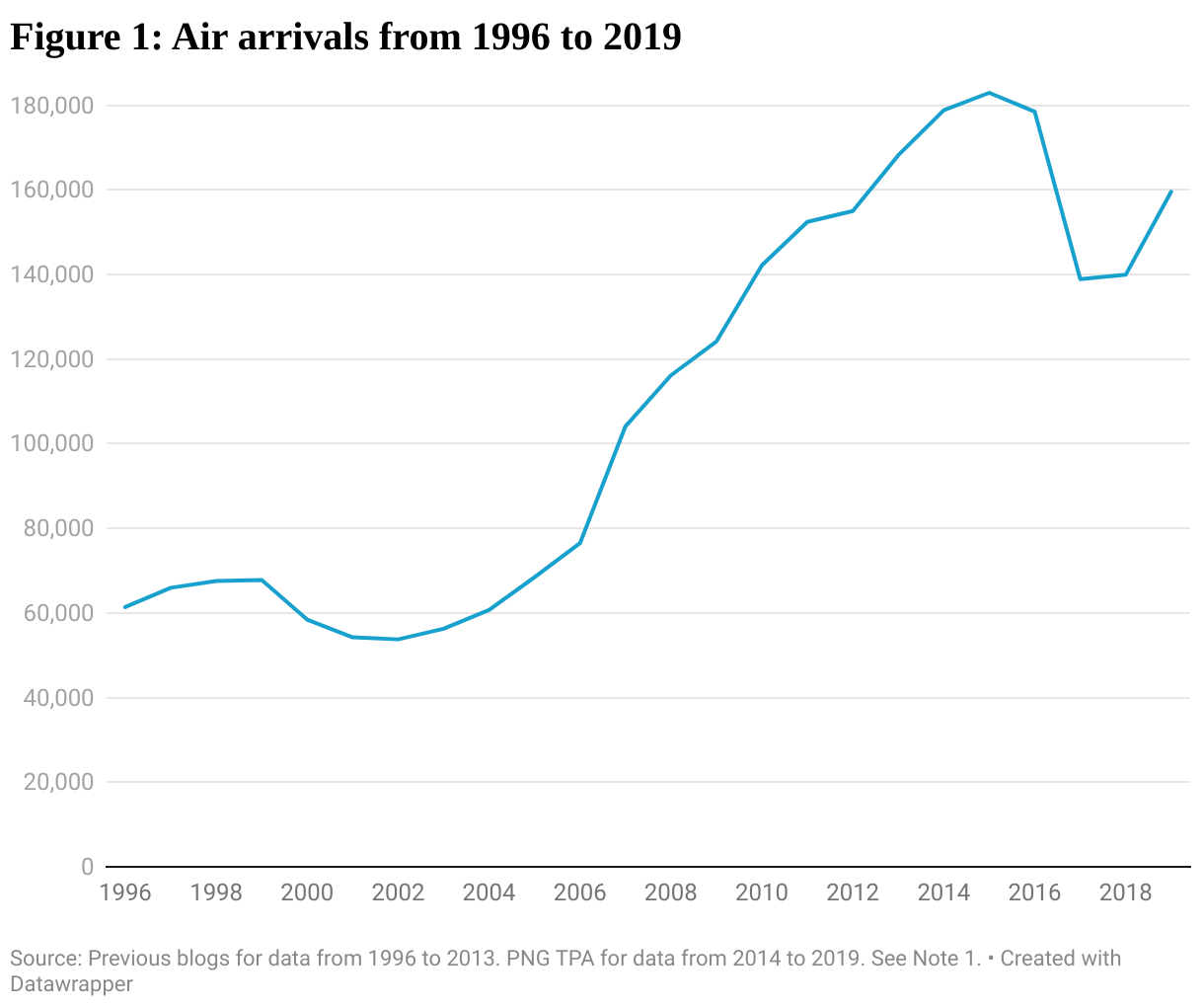 We can get a clearer picture by looking at the three main categories of foreign visitors to PNG: business travellers, workers, and tourists.

The fall in business visitors (see Figure 2) of one-third between 2016 (the peak) and 2019 is hardly surprising given the weak growth performance of the PNG economy in recent years, the lack of progress on various major resource projects, and the difficulties placed in the way of foreign investors, including foreign exchange rationing and policies to restrict foreign investment.

The fall in arrivals for employment, also shown in Figure 2, can also be explained by recent economic trends. It began in 2013, the year in which PNG LNG construction was completed, with a steep decline to 2018 of one-third, before significantly bouncing back in 2019. It’s not easy to explain the exact trajectory, but the decline between 2013 and 2019 in foreign workers arriving matches that of the formal sector workforce over the same period: 8%. 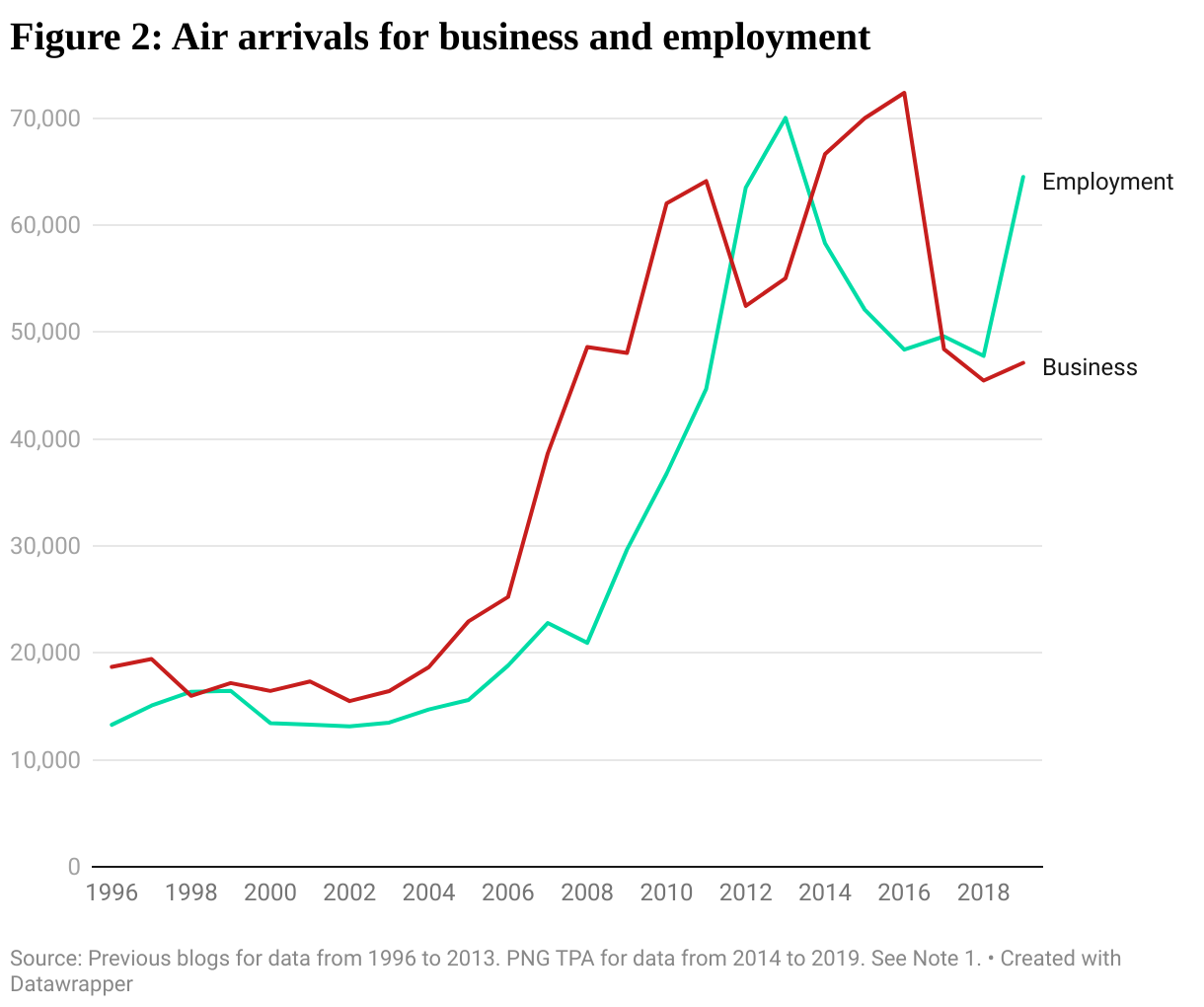 The sharp decline in tourists arriving by air is more surprising. Their number, like that of business arrivals, also fell by one-third between 2015 and 2019. The success story for PNG tourism in the last few years has been cruise arrivals, which have increased from zero or close to it a decade ago, to almost 51,500 in 2019. 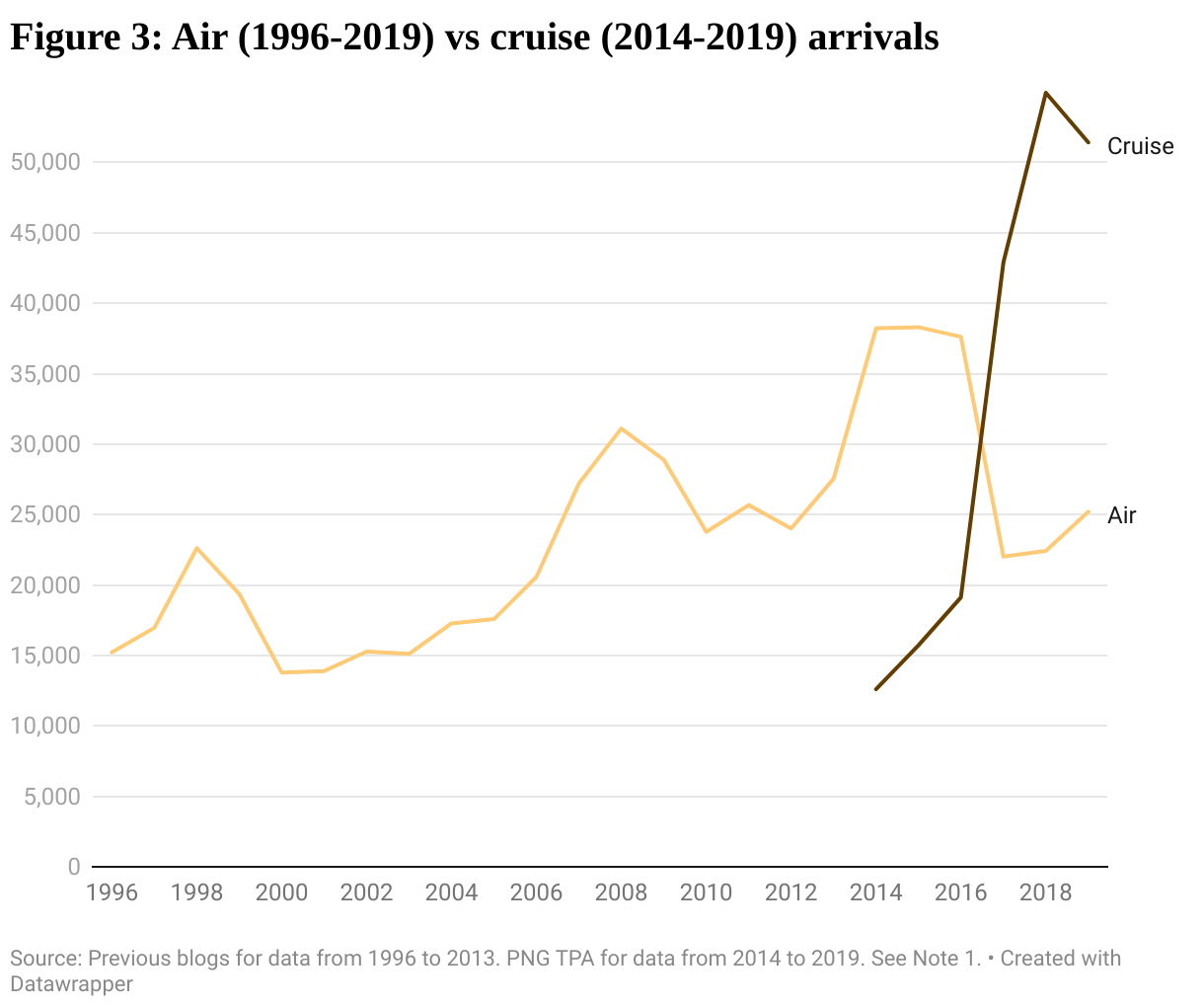 Unfortunately, those travelling by cruise ship contribute very little to the PNG economy. A 2019 Tourism Promotion Authority (TPA) report put their total domestic spend at just K21.6 million, which is only K420 per cruise passenger. The same report estimates that each air arrival contributes K7,500 per person, 18 times as much. Or, to put it differently, 51,500 cruise arrivals are equivalent in their expenditure to only 2,900 tourists by plane. The increase in cruise travellers in no way offsets the precipitous decline in air tourists.

2017, an election year, was a disastrous year for tourism, with a decline of 41% air arrivals in a single year. When we look at the data by nationality, we find a slight increase in the number of Australian tourists, the biggest category, in 2017, but big falls in tourists from all other regions. Australia dominates the PNG cruise market (with about 80% of market share), even more than it does the plane-tourism market (just above 50%). So it doesn’t look like people have decided they would rather cruise around PNG than travel to it by air. Rather, the two trends seem unrelated.

PNG’s TPA in its analysis has emphasised the total number of tourists. While this makes for a much more positive narrative, it hides the sharply reduced contribution of tourism to the PNG economy.

Of course, in 2020 COVID-19 severely disrupted international travel. There were only 38,940 international air arrivals in PNG in 2020, one-quarter of the 2019 level. With low levels of vaccination, it is hard to see how tourism will recover quickly in PNG. Travel for business and work will recover more quickly, but the former might also stay low now that people are used to virtual meetings.

The last time we looked at this international air travel data on the blog we were analysing data up to 2013. The question that blog ended with was whether visitor growth would remain strong, or whether there would be a slowdown. No one would have guessed then that the number of visitors in 2019 would have been actually below the 2013 level.

How relevant these past trends are for the future is uncertain. It would be good to see some analysis from PNG’s TPA on why tourism by air shows no sustained growth since the late 1990s. But perhaps the main value of this exercise is to show how difficult it is to predict the future from the past – and, unfortunately, to underline that while the resource boom of the 2000s permanently increased economic activity in the country, that boom finished several years ago, and the economy has been stuck in the doldrums ever since.