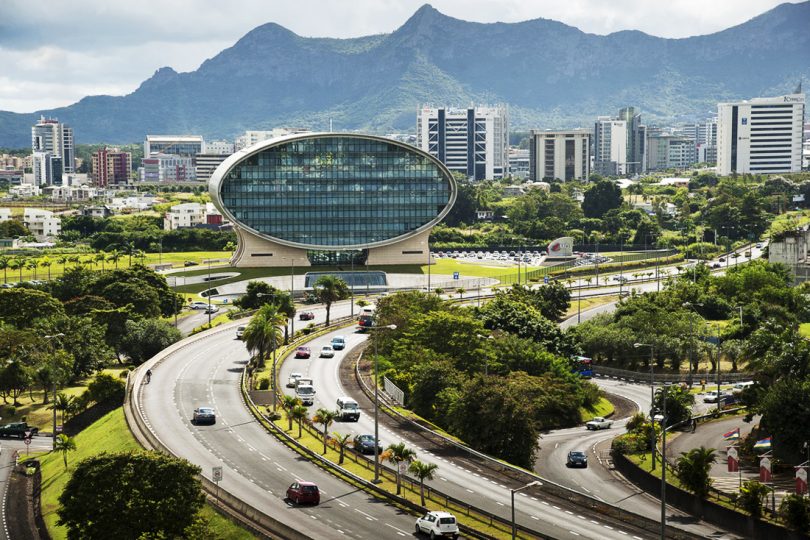 Mauritius was recently declared by the World Bank to be a high-income country. On the other side of the globe, but with many similar characteristics, Fiji, which used to be richer than Mauritius, now has less than half the latter’s income per capita. The first in our two-blog series looked at Mauritius’s superior economic, social and political performance. This post tries to explain the huge differences observed.

Both countries were dominated by sugar cane farming in the past, and are reliant on tourism today. While Mauritius generates slightly more tourism dollars per capita than Fiji, its economy as a whole is less dependent on tourism. Since 1995, Fiji’s international tourism receipts as a proportion of total exports have consistently been higher than Mauritius’. Since 2010, the annual gap has been about 15 to 20 percentage points.

Mauritius’ lower reliance on tourism reflects the fact that its economy is more diversified than Fiji’s. Mauritius’ top exports in 2018 were: travel; textiles; and business, professional and technical services. These constituted 39%, 11% and 10% of total exports, respectively. On the other hand, Fiji’s top exports in the same year were heavily skewed towards travel, at 54% of total exports, with its next two biggest exports, bottled water and fish products, only representing 6% each.

Mauritius’ exports are not only more diversified; they have grown faster as well. As Figure 2 shows, Fiji’s and Mauritius’ inflation-adjusted exports were virtually the same in the first half of the 1980s. Since then, however, Mauritius’ exports have grown much faster – at least till around 2012. Its exports have been struggling since though:  no doubt this is one reason why its growth has slowed (as shown in Figure 2 of the previous blog). 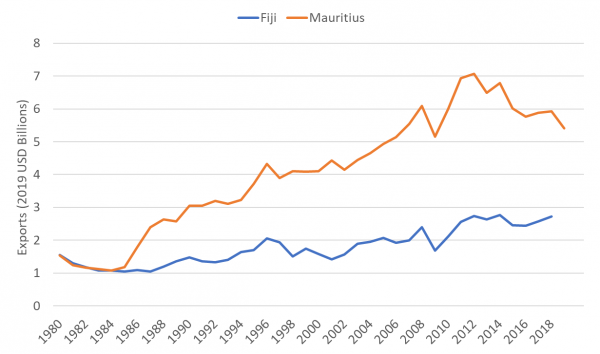 As Figure 3 shows, Fiji and Mauritius had a very similar economic structure in the 1970s, the decade following independence. In 1976, both had a service sector that made up 47% of GDP, manufacturing at 11-13%, and agriculture at 20-24%. Now the two economies are very different. Agriculture is still 12% of GDP in Fiji, but only 3% in Mauritius. The share of manufacturing has changed little in either country. Mauritius has become a service-based economy, with the service sector now accounting for 67% of GDP, compared to just 54% in Fiji.

Figure 3: Fiji’s and Mauritius’ economies – value added of respective sectors as % of GDP 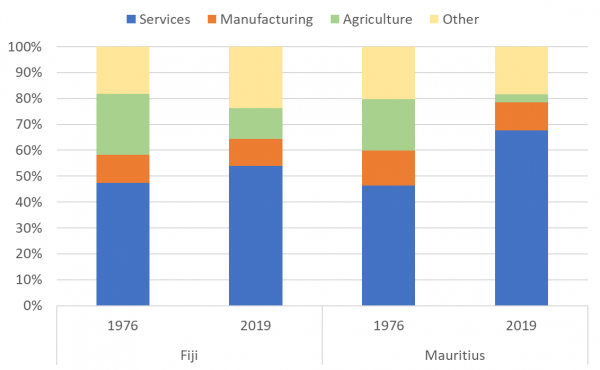 Mauritius has been particularly successful in developing competitive niches in the service sector. In 2019, the information and communications technology/business process outsourcing sector contributed 5.8% to its GDP.

Facilitating trade between Asia and Africa has also proven to be a successful strategy. According to Auty (p.271), Mauritius channelled about 40% of India’s inbound foreign direct investment during the 2000s through a slew of accommodative policies such as a double taxation treaty and favourable tax rates.

Underlying Mauritius’ superior economic performance is no doubt a better quality of governance. In a 2019 ranking of countries by ease of doing business produced by the World Bank, Mauritius ranked 13th while Fiji languished in 102nd spot. In the World Bank governance indicators (which cover about 210 countries), Fiji ranks slightly higher for control of corruption, but Mauritius ranks much higher for government effectiveness, regulatory quality, and rule of law.

A deeper account would explain not only Mauritius’ economic success but also its better governance and its greater political stability and freedom (as shown in our first blog). Both Fiji and Mauritius are multi-ethnic societies. Economists Arvind Subramanian and Devesh Roy have argued (in chapter 8 of this book) that Mauritius’ ethnic diversity has been a strength, since it has forced the country into a moderate settlement, bound by the rule of law.

That argument doesn’t stack up well in the comparison with Fiji. From that perspective, Mauritius has benefited rather by the clear numerical dominance in that country of one ethnic group, the Indo-Mauritians, who make up some two-thirds of the country’s population.

Fiji by contrast has been wracked by tensions between its two main ethnic groups, and by the process of one group asserting itself over the other. Ethnic conflict has also been more intense in Fiji because one group is indigenous, the iTaukei, and the other group, the Indo-Fijians, started arriving in the late 1800s. Mauritius was uninhabited until 1638 when it was first colonised.

There were about the same number of iTaukei and Indo-Fijians in the 1940s, and slightly more Indo-Fijians by the 1980s. The subsequent backlash against the latter group (the first three coups were directed against governments popular with Indo-Fijians) changed the country’s ethnic make-up as Indo-Fijians decided to leave. Indigenous Fijians are now once again safely in the majority. The last census in which ethnicity was recorded was in 2007, and it showed one-and-a-half times as many iTaukei as Indo-Fijians.

Is Fiji then becoming more like Mauritius? Certainly, there is now one dominant ethnic group in Fiji, but there is probably also greater ongoing polarisation. One interesting contrast is the very different marriage rates between ethnic groups in the two countries. We don’t have recent data on this, but it was estimated to be 0.9% in Fiji in the 1990s; and ten times higher at 8.8% in Mauritius in the late 1980s.

And then there is the damage done to institutions – the rule of law, democracy – in Fiji by the country’s four coups. This seems permanent or at least long term. Catching up with Mauritius – the country Fiji was once richer than, but is now twice as poor as – will not be easy. But Fiji would do well to aim to become more like Mauritius: economically more diversified, politically more free, and socially less polarised.

[1] Source for all figures: World Bank. Table 2 is from the World Bank Governance Indicators. It shows the percentile rank among all countries with 0 being  the lowest and 100 the highest.

This is the second in a two-blog series on #Fiji-Mauritius comparisons. You can find the first blog here.