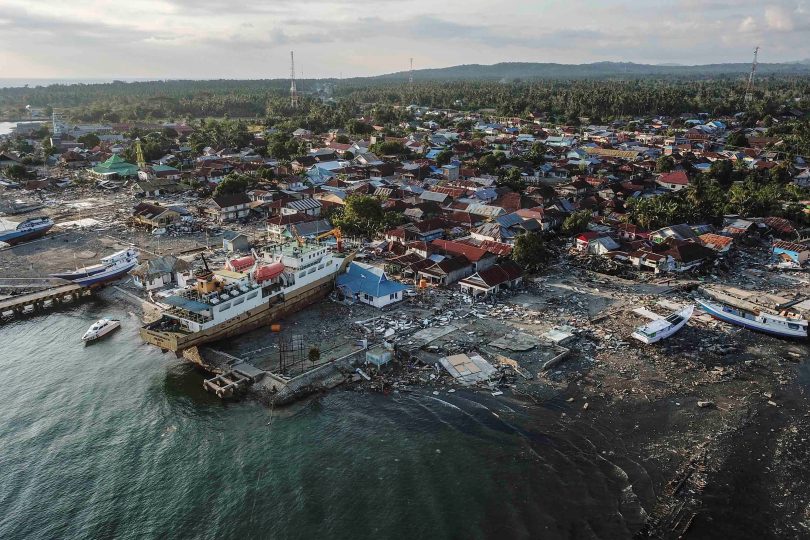 The devastating earthquake and tsunami in Sulawesi, Indonesia, have shocked people around the world. Images of the earth liquefying, the terrifying screams as people watch a tsunami engulf the shore, and the wreckage left behind have led to a global outpouring of support and responses from aid agencies and NGOs.

Last week, Indonesia’s disaster coordination agency (Badan Nasional Penanggulangan Bencana, or BNPB) issued guidelines on the involvement of foreign aid workers, stating that they needed to conduct all activities through local partners, and be registered with government agencies.

The announcement has surprised the humanitarian sector at large, and some have called it confusing. World Vision Australia’s Tim Costello said it was “very strange”. Amnesty International Indonesia have labelled it “a sad example of bureaucracy trumping humanity”.

The official announcement is helpfully written in English in an infographic on Twitter.

The same Twitter account has posted images of shelter tents with Chinese characters on them, retweeted World Food Program photos of Australian aid shipments, celebrated Canadian aid supplies arriving, and been thankful for JICA supplies. The World Bank and UN have visited, with the former offering a US $1 bn package. It’s not a response that is turning its back on international relief, contrary to some commentators.

Following criticism, the policy on foreign aid workers and volunteers was further clarified:

Sutopo told reporters 22 nationals had been asked to leave due to not having the necessary expertise, and having failed to register with the Ministry for Foreign Affairs or their respective embassies.

“There’s no harm in [volunteers] coming, as long as they meet our requirements. What’s so hard about reporting?”

To those who are trying to frame this as foolhardy, or a political decision due to upcoming elections, issues of sovereignty, or a move to protect Indonesia’s apparently fragile sense of nationalism, there is a real need to take a step back.

The Australian Council for International Development’s (ACFID’s) response has been balanced, noting the pressures of a huge influx of international actors on government and the need to work with local agencies rather than to take over. It also noted that its members have not reported problems from the rules in their responses. (However some NGOs from abroad have told media they couldn’t get access.)

It seems that Indonesia’s intention was not to kick out experienced international NGOs, many of which have substantive national offices in Indonesia with predominantly national staff (and a quick Google shows they are currently very active), nor to boot out relevant technical experts. It is to try to exercise some kind of control over the cavalcade of randoms who might not be all that helpful, may have niche interests and who are not coordinating with government. In other words, those acting from self-interest.

BNPB has a solid reason for wanting to exercise some degree of control, based on past experience. For those who have forgotten some of what went on during the aftermath of the 2004 tsunami, here’s a quick reminder.

(Robin Davies’ powerful pieces on his time in Aceh in the immediate aftermath of the tsunami are also well worth reading for perspective on the challenges in response to a large-scale disaster.)

Life in Aceh has well and truly resumed after mass devastation. In that sense, aid worked. But there was a lot of wastage and questionable behaviour, which is what BNPB seems keen to avoid.

As someone who spent several years living in Indonesia, working mostly in the media, friends and former colleagues have been reporting from the ground in Palu and Donggala (a mix of Australian and Indonesian nationals, which seems relevant to note). The stories and images are heart-wrenching. It’s understandable that people want to help.

But the one thing they have all noted is the incredible generosity of local people. The kindness. The resilience. The problem-solving.

Those may sound like clichés, but they aren’t hard to believe if you’ve spent time in this part of the world. And it makes sense to build on the good that is left.

No government-coordinated response to a major disaster will ever be perfect. In six months or a year there will be many lessons learned on what could have been done better. There will always be particularly Indonesian quirks about an Indonesian disaster response (like the fact that West Sumatra always sends heaps of beef rendang…). The response is already being criticised.

But harnessing local capacity makes sense. People in the sector go on about it all the time – including at the World Humanitarian Summit in 2016, where “localisation”, as it is called, was adopted as one of the major objectives in humanitarian responses world-wide.

And for the rest of us, without any useful skills in disaster recovery to offer the good people of Palu and Donggala, we should just give money.