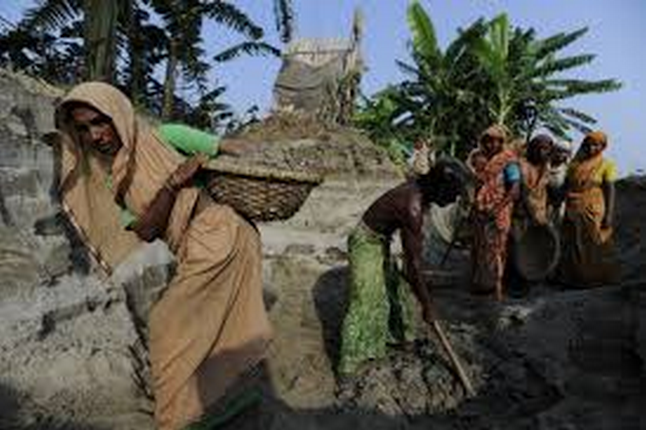 This week in Canberra, Foreign Minister Julie Bishop delivered her new aid policy  for the Australian aid program (see Devpolicy’s analysis here). Meanwhile in New York, the United Nations Open Working Group on Sustainable Development Goals is nutting-out its recommendations to Ban Ki-moon for what major goals and targets should form the next global development agenda.

We are still a way off from September 2015, when world leaders will be asked to ‘sign on’ to the global post 2015 agreement that will replace the Millennium Development Goals. But September this year will mark an important milestone along the road, with the UN Secretary General set to deliver a report on possible post 2015 goals and targets for world leaders to consider.

In a new report released this week, Oxfam argues that some goals are too important to fall off the agenda: eradicating extreme inequality and addressing global climate change are two that should stay on the table. Here’s why.

To put it lightly, there’s been a fair bit of talk about inequality lately. The recent release of Thomas Picketty’s book Capital in the Twenty-first Century, along with increasingly loud messages from Christine Lagarde and the IMF [pdf], the World Economic Forum, the OECD, a smattering of heads of Government (including Barack Obama and  Xi Jinping), and even Pope Francis, have seen inequality rise to the forefront of global public discourse.

There’s good reason for this. Inequality is on the rise globally. In January Oxfam released Working for the Few, a report with the now well-publicised figure of just 85 individuals owning the same wealth as the poorest half of the world population – 3.5 billion people. Amazingly, Forbes has recently recalculated the figure based on new data – suggesting today that just 66 people could own the same wealth as the bottom 3.5 billion. The figure will no doubt fluctuate as time goes on and new data emerges, but the almost unimaginable disparity remains.

Growing income inequality is not only devastatingly unfair for millions of people, it also compounds other inequalities, such as those between women and men. It leaves people less able to recover from unexpected events like natural disasters, and it can multiply social problems and fuel conflict.  Inequality can further entrench political capture: the wealth of those at the higher end of the economic spectrum allows them to wield disproportionate influence over political decision-making, which can result in policy directions that fail to address the needs of poor people, driving them further into poverty.

And this isn’t just a trend in developing countries. Out of 26 economies categorised as ‘advanced’ by the IMF, 24 of them have seen the top 1% of wealthiest people increase their own share of wealth in recent years. Last Monday Oxfam released a report [pdf] showing rising inequality at home, with the richest 1% of Australians owning the same wealth as the bottom 60%.

A stand-alone goal on eliminating extreme inequality in the next global development agenda would ensure efforts to tackle poverty are accorded the priority they deserve. It would also go to the heart of the need for the next development agenda to be universal and  applicable to all countries, both ‘developed’ and ‘developing’. Poverty and extreme inequality are problems both at home and in our region – and all governments must be held to account for delivering on targets aimed at their eradication.

Rajendra Pachauri was right, back in 2007, when he said that it would be the poorest of the world, including poor people in prosperous countries, who would be worst hit by global warming.

Poverty and extreme inequality cannot be overcome without addressing climate change. This means both substantial effort towards avoiding carbon emissions, and supporting communities to adapt to those impacts that can no longer be avoided. Climate change exacerbates existing inequalities, both within and between countries.

Shocks and stresses, such as increasing extreme weather associated with climate change, can compound existing inequalities by damaging livelihoods and deepening the cycle of poverty. Many risks are dumped on poor people [pdf], and women face an overwhelming burden.

Climate-related risk needs to be shared more equally across societies and managing risk should be a much greater focus of development work in general. The inequality that exposes poor people to far more risk than the rich needs to be challenged. Underscoring this, an alliance of African nations has recently adopted a common position on the importance of tackling climate change and mitigating risk in the post 2015 framework.

A stand-alone goal on ensuring climate-smart development and a focus on reducing disaster risk must be included in the next development agenda. Some may see this as too difficult or even unnecessary, given the UNFCCC Paris Conference to finalise a new global agreement on climate action is scheduled for December 2015, two months after the new MDGs are set to be finalised. But to ignore the importance of clear action on climate change for global security, development and prosperity in the post 2015 framework would be a mistake. September 2015 is a chance for global leaders to signpost action on climate change and comprehensively address the issue in the context of poverty alleviation and sustainable development. Including a stand-alone goal on climate-smart development will not duplicate but rather complement the new agreement under the UNFCCC, ensuring that future development fully addresses the climate challenge.

As we move towards September 2015, a range of proposals will be put forward – and knocked back – as part of finalising the next global development agenda. Tackling extreme inequality and climate change are two issues we urge national governments to keep firmly on the table.