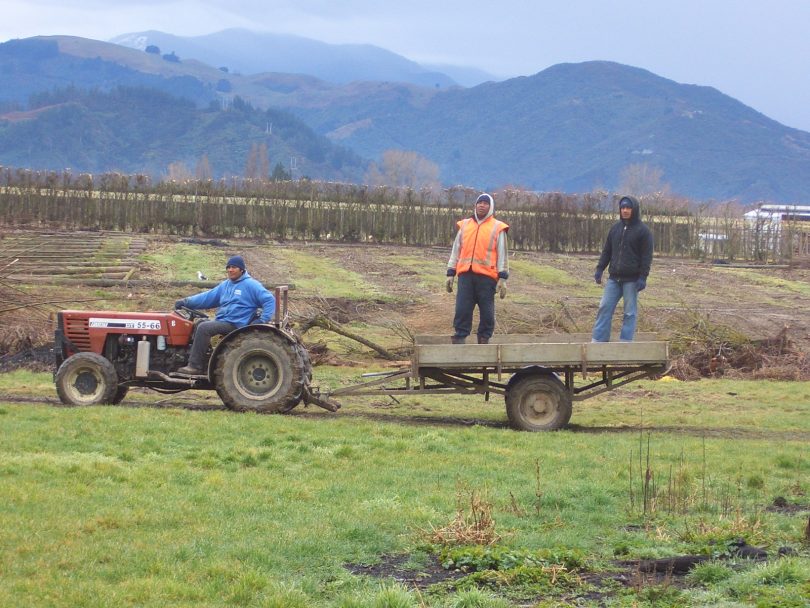 By late May 2022, as the peak harvest period for New Zealand apples and kiwifruit came to an end, and winter pruning of kiwifruit and grape vines commenced, approximately 12,200 workers were onshore under the Recognised Seasonal Employer (RSE) scheme (Figure 1). This is almost double the number usually found at this time during a ‘normal’ year of RSE recruitment.

Of the 12,200, more than 2,300 were ‘long-term’ RSE workers who entered New Zealand in late 2019 or early 2020, pre-COVID, and who have spent well over two years in the country undertaking horticultural seasonal work, without returning home. Alongside the long-term workers were more recent RSE arrivals, including almost 1,700 workers who entered under two border exceptions granted by the New Zealand government in 2021 (shown as BE-1 and BE-2 in Figure 1), and just over 8,200 workers who arrived under the subsequent one-way quarantine-free travel (QFT) arrangement from October last year. 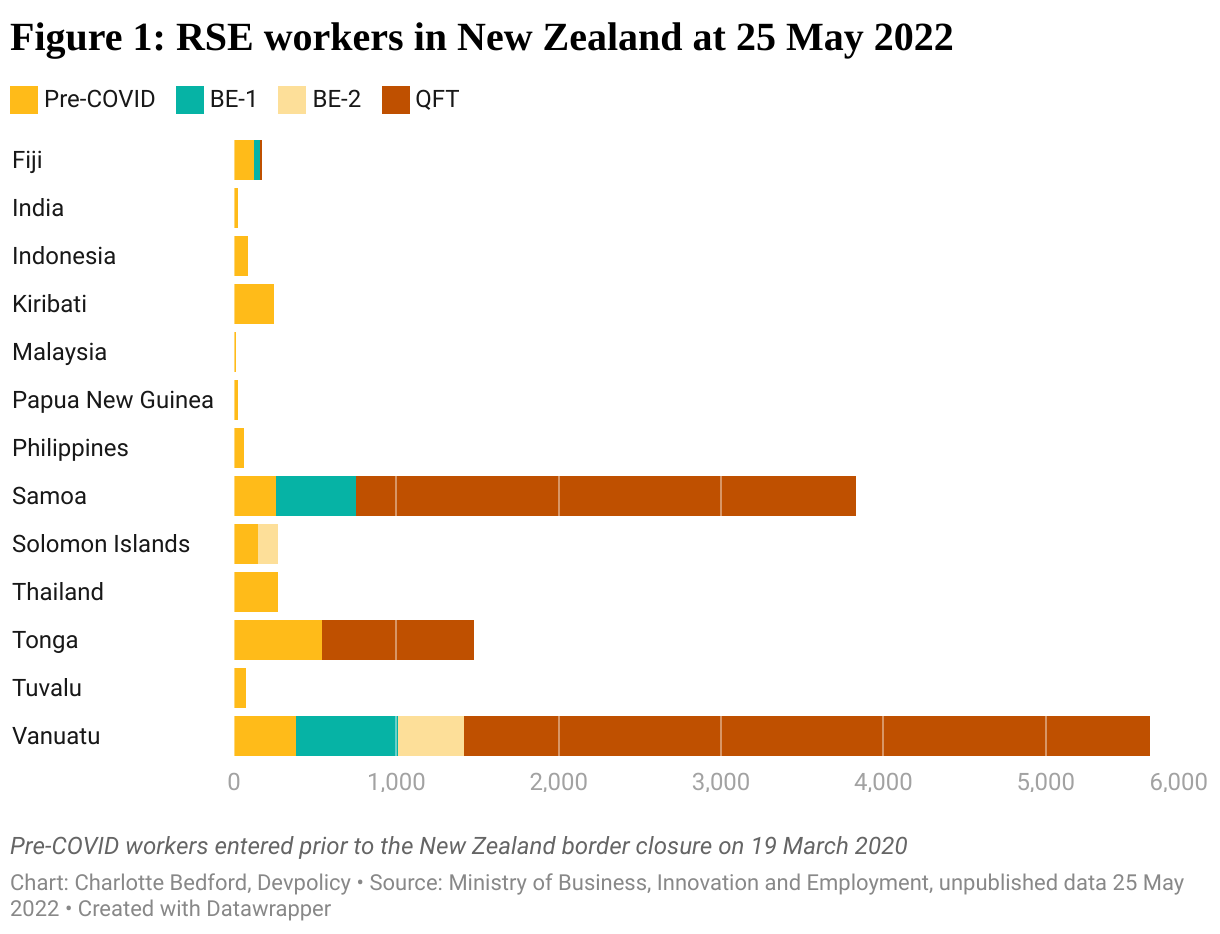 The winter months (June–September) are the low season for the RSE scheme, with demand for around 6,000–7,000 workers for winter pruning work. Usually, sizeable numbers of RSE workers who are employed for the peak summer harvest period return home to their families in late May and early June, taking up to a five-month break, before potentially returning to New Zealand for another seven-month stint of seasonal work.

The coronavirus pandemic has disrupted these usual seasonal rotations of RSE labour. Figure 2 shows the number of RSE workers onshore around mid-year for the past five years (2018–2022). As the figure illustrates, in 2018 and 2019, the last two normal years of RSE recruitment pre-COVID, there were between 5,500 and 6,500 RSE workers onshore at the end of June for winter employment. 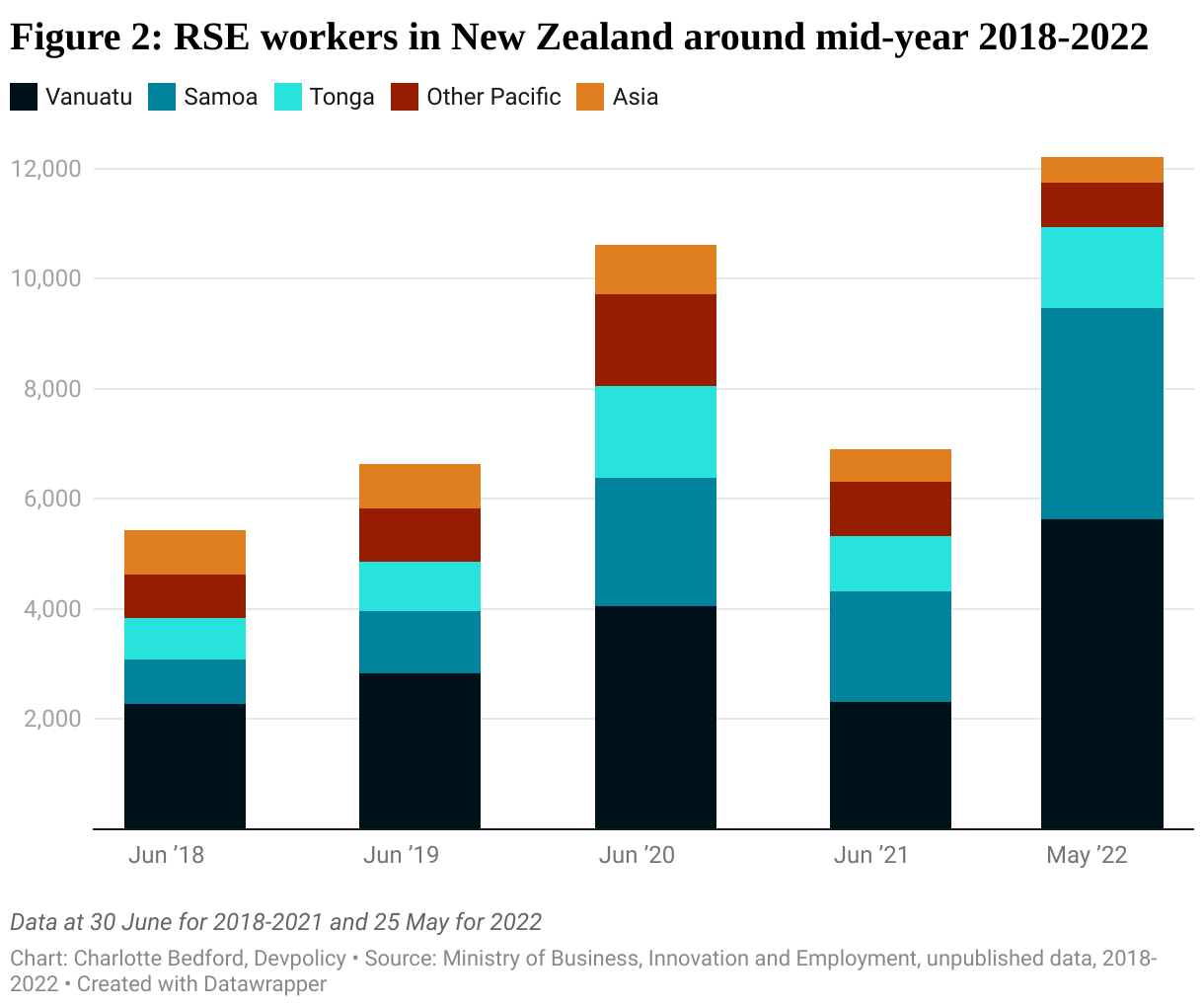 In 2020, following New Zealand’s border closure in late March in response to the pandemic, more than 10,500 RSE workers were in the country for winter. To help mitigate some of the problems associated with the oversupply of RSE labour for the low season, financial assistance was made available to RSE workers who found themselves with little or no winter work and who could not readily return home.

Now into the third year of the pandemic, for some RSE employers this is the third consecutive winter they have retained RSE workers in their employment who would, in a normal seasonal rotation, have returned home. For employers in this situation, the challenge has been to find enough work to meet the scheme requirement of 30 hours of work each week, and make certain workers are earning enough money to cover their living costs, during what is effectively the off-season for many growers.

For RSE stakeholders in New Zealand, repatriating the more than 2,300 long-term RSE workers who entered pre-COVID remains a priority, followed by the 1,100 who arrived in the country in early 2021 (under BE-1) and have been in-country more than 12 months.

Over this winter, industry and government aim to transition the scheme largely back to ‘business as usual’ in terms of two-way RSE labour flows, and enable RSE employers and their workers to return to their usual seven-month rotations of seasonal work from spring 2022 onwards.

However, repatriation pathways between New Zealand and some Pacific countries remain slow, largely due to few commercial flight options (Tonga, for example, will only have two flights a week during August, and three per week until November) and, in some instances, COVID-related travel requirements that remain in place from the Pacific side.

With almost double the number of RSE workers usually required for winter still in the country in late May, Immigration New Zealand (INZ) has amended RSE policy settings to help support employers and their workers. In early July, the Minister of Immigration approved a Special Direction which provides greater flexibility to RSE employers, to help keep workers in full-time employment until they can return home.

Valid until 31 October 2022, visas granted by Special Direction extend the range of seasonal tasks RSE workers are eligible to undertake – beyond planting, packing, maintaining and harvesting (the four approved areas under the RSE policy), to performing any kind of paid work in horticulture and viticulture. The Special Direction also streamlines processes involved in moving RSE workers between employers and regions under subcontracting arrangements, reducing the administrative burden on employers.

There is no visa application or payment required to apply for a new Limited Visa issued under the Special Direction, and no new Agreement to Recruit application. RSE employers instead submit a signed undertaking to INZ which is less detailed and lists the workers they will continue to employ.

An RSE employer who makes an undertaking to INZ remains responsible for those workers and must meet all standard RSE employer obligations, even if the workers are subcontracted to another RSE. Obligations include ensuring that workers remain in full-time employment (guaranteed 30 hours of work per week at the living wage of NZ$22.10 per hour); that workers are provided with suitable pastoral care and accommodation (which must have been audited by the Labour Inspectorate in the past 12 months); and that mandatory RSE medical insurance is extended. RSE employers applying under the Special Direction must also prioritise, as soon as practicable, the repatriation of workers listed in the undertaking.

Changes made to the RSE policy in 2021 – namely, requiring RSE employers to pay a minimum of the living wage (which is higher than the national minimum wage), and to guarantee 30 hours of work each week (removing the ability for employers to average hours out over the duration of the contract) – has made employing RSE workers costlier for RSE enterprises. The greater flexibility offered by the Special Direction will be a relief to employers who have more workers than they need for winter and who will struggle to find sufficient tasks in planting, maintaining, harvesting and packing crops, but are still required to meet RSE policy requirements.

The expansion of approved tasks that can be undertaken by RSE workers, as well as the streamlining of processes for RSE employers to relocate workers with reduced paperwork and costs, are positive signs of potential changes to RSE arrangements that might be incorporated into the 2022 RSE policy review – a piloting of new arrangements, as such.

The policy review, which commenced in 2019 and largely stalled during COVID-19, is now underway again and covers both operational aspects of the scheme as well as policy settings. Any new measures to reduce the administrative burden on RSE employers (and associated costs) will be widely welcomed.

As industry and government look to return the RSE scheme to its regular seven-month cycles from spring onwards, the next big question for employers and industry groups relates to the setting of the RSE annual cap (set at 16,000 for 2021-22). Although the New Zealand border is now open, backpacker numbers are expected to be lower than usual for the coming summer, which means a traditional source of seasonal labour won’t be as readily available as in earlier years.

A possible shortfall of seasonal labour for the peak summer harvest period, combined with new areas under planting coming into production as the export-focused horticulture industry continues to expand, is likely to lead to renewed pressure from industry for the RSE cap to be increased. The Prime Minister has recently signalled that any real expansion of the scheme is unlikely. Nonetheless, industry will be hopeful for a modest increase and the ability to bring in ‘fresh’, new RSE recruits to help support the coming season.