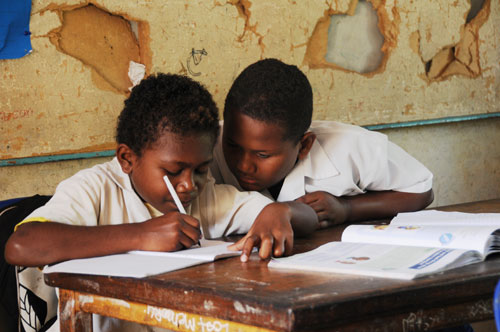 In my previous blog I considered the peace and stability service delivery dividend that RAMSI has contributed to in Solomon Islands since 2003 against recent evidence that service delivery gains may be slowing down. I asked whether the slowdown is due to questions of political governance, and what could be done about it. In this blog I consider whether an idea from Paul Collier about a dedicated state / non-state hybrid Independent Service Delivery Authority (ISDA) would make a difference.

Collier writes in a paper [pdf] that he co-authored in 2009 with Bold and Zeitlin about an ISDA concept for weak states. This concept includes government, but is not government controlled. It seeks to by-pass the governance conundrum in weak states and take advantage of the improved “staff incentives and selection” available to non-state entities that are more focused on core aspects of service delivery.

Wisely, Collier acknowledges the need to contextualise an ISDA properly within the political environment. An ISDA may not be necessary in countries where large HDI gains backed by developmental political leadership at the national level are taking place. But in countries such as SI, where executive political will to deliver public goods equitably across the country is not so evident, it may be an option worth considering.

Collier has affirmed and expanded these ideas on alternative service delivery methodologies in a paper written for the UN University in January 2012 titled, “How to Spend it: The organization of public spending and aid effectiveness[pdf].”

An ISDA would complement and scale-up SIG service delivery, and be a part of public governance. It could be governed by a Board with government representatives, but a majority of non-government reps, including the major donors, churches, private sector and civil society. Its charter would have it focus solely on service delivery. It should start small as a pilot project focusing on something like Early Childhood Education, of which there is already a burgeoning array of private providers in SI. It would be guided by government policy in respect of the broad direction of service delivery – national curriculum, health standards, etc. The ISDA configuration could broadly follow the policy/purchaser/provider split used widely around the world, with SIG setting the policy framework, ISDA purchasing, and anyone (including SIG, churches, private sector or a consortium of any combination) providing.

An ISDA could also potentially play a positive governance role in leveraging the increasing amount of ‘slush funds’ that go through MPs (said to be currently about 10% of available public funds), instead of through line Ministries. An ISDA could say to MPs, “If you are genuinely serious about service delivery, then direct your slush funds through us and we will double them and use our service delivery providers to deliver public goods equitably across your District.”

There are very sound theoretical reasons and practical evidence to support the idea that an ISDA would improve aggregate levels of service delivery in SI, not only through its own actions but also (and perhaps more profoundly) through the wider effect of changing incentives in the political economy marketplace. An increase in competition in what is currently a monopolistic political economy will lead to more and better services being delivered to poor Solomon Islanders. An expanded legitimate formal private sector will also have a game-changing effect on the political economy. However, we can expect that if the ISDA ever scaled-up, some in the political and administrative elite and other actors that constitute the status quo would mount a rearguard action for these same reasons. An ISDA would apply great pressure to the current closed shop that is public policy at the national level in SI and, if allowed to flourish, could potentially re-configure the current governance equation.

There are sound reasons to support the state-centric status quo, including:

An ISDA is an option worth pursuing in SI, at least as a small-scale pilot, because, if configured right, it will:

Is an ISDA an idea worth pursuing, or is the state-centric status quo of service delivery in Solomon Islands the best we can hope for?

This is the second in a two piece series on public service delivery in the Solomon Islands. The first is available here.