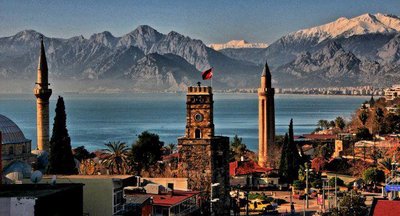 The impetus for the G20’s development agenda, dating right back to the London leaders’ summit in 2009, was threefold. There was a desire to strengthen institutional legitimacy, but also a moral concern (as Gordon Brown frequently said, ‘we will not pass by on the other side’) and, above all, a pragmatic determination to buttress global prosperity by proliferating sources of growth and by ensuring that economic shocks are as far as possible absorbed rather than magnified as they travel across borders.

This determination was reinforced by a perception, arguably less relevant five years later, that the received international development framework, at least as represented by the Millennium Development Goals, was blind to some of the fundamental conditions for sustained, resilient economic growth—namely adequate investment in economic infrastructure and production, well-functioning labour markets and effective social protection systems.

There was, it seemed, a distinctive job to be done in ensuring that G20 members’ policies and intergovernmental institutions were appropriately geared to promote growth and resilience in low-income countries for the benefit of all countries. The G20, at that time, did not merely set out to control the spill-over effects, positive and negative, of G20-internal measures.

It was argued in the first part of this post that the G20, over the four years separating the Seoul and Brisbane summits, has delivered far less than low-income countries might have expected—and very little that could not have been achieved by other means. So, if something like the above case for a development agenda is accepted, how might the G20 make a better fist of it from this point forward?

As a coordination forum of major economies capable in principle of making headway on some but not all global collective action problems, the G20 has broadly three useful strategies available to it:

The G20 is already deploying the three strategies above in the pursuit of financial sector stability, macroeconomic policy coordination and the protection of sovereign taxing powers. Most obviously and recently, it has adopted a global growth target [pdf]. It has also propagated a standard for the automatic exchange of information [pdf] between countries on tax matters, and strengthened institutions important for global financial sector stability.

In the development arena, the G20 has taken over the G8’s remittance reduction target and it has done a little to propagate by allusion several important standards—the Principles for Responsible Agricultural Investment [pdf]—and transparency standards for extractive industries and the construction sector. But it has sought to do very little by way of systemic institutional reform. The creation of an inter-agency social protection board for the multilateral system occupies a minor place in this category, as does the commissioning (some time ago) of joint, strategic overviews of the multilateral development banks’ work in infrastructure [pdf] and food security [pdf]. But these multilaterally-oriented tasks did not proceed far and are no longer on the G20’s radar screen.

Instead, the outputs of the G20’s development agenda, as indeed of its other agendas, have increasingly been studies, pilot projects, knowledge-sharing platforms, toolkits, procedural guidance, and technical assistance facilities—now including the infrastructure hub announced in Brisbane. To the extent that such things are useful to anybody, they are properly the province of organisations like the OECD, or the UN’s regional economic commissions, or the secretariats of regional economic groupings like ASEAN, APEC and the African Union. The G20, obviously enough, should sit above this industrial work.

So, what, more specifically, might a relevant G20 development agenda look like? Some of the right ingredients are already there, or have briefly been there in the past; others are entirely absent. Using the framework above, specific priorities might include the following:

It is in the third of the above areas—relating to multilateral institutions—that progress is likely to be most politically feasible. However, it is important that the G20 maintain a cross-institutional perspective. For example, if we must have a new infrastructure hub, this entity would do better to leave matchmaking and project-pipeline monitoring to other institutions, and instead seek to broker productive, efficient working relationships between the rapidly proliferating range of actors in this field, including the Asian Infrastructure Investment Bank, the World Bank’s Global Infrastructure Facility, the ASEAN Infrastructure Fund, and so on.

Finally, it is important to remember that the G20 lacks not only consistent leadership but also consistent support in the form of a permanent secretariat. The need for the latter has long been debated. The ‘no-secretariat’ camp wants, fairly enough, to avoid an ever-ramifying agenda and a servant that bulldozes or befuddles its political masters. But this choice involves real trade-offs, especially in connection with the development agenda. In particular, it is difficult seriously to pursue systemic reforms in the multilateral system if one’s method of work is sporadic and largely dependent on actors within that system. A Development Working Group needs to exist, and should rely on existing institutions for certain things—such as tracking progress toward targets—but it also needs some kind of an independent institutional base. This might, for example, take the form of an expert advisory group with a full-time chair and small secretariat, capable of casting a critical eye over the multilateral development terrain, and also of guiding the G20 away from the technicalities in which it so often seems to get bogged. 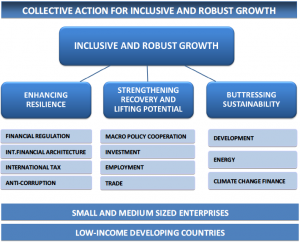 Now the G20’s development agenda moves into its fifth year. Turkey [pdf], as incoming president, has said [pdf] that it wants to make the G20 more relevant to the rest of the world, including low-income countries, and that development will be ‘a primary focus’ in 2015, as it was for Korea in 2010. However, the approach so far described by the Turkish presidency (the high-level diagram at right gives some sense of it) looks rather byzantine.

The best thing Turkey could do is try to gain general acceptance of the basic principle that the G20’s role in development, as in other areas, is to promote collective action on problems of global significance, and that it should do so not by sponsoring pilots, studies, toolkits, platforms and hubs, but by adopting concrete targets, propagating important standards and pursuing systemic multilateral institutional reform.