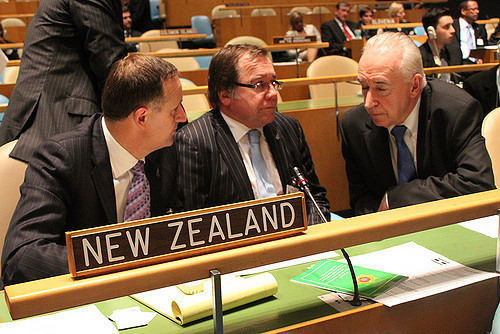 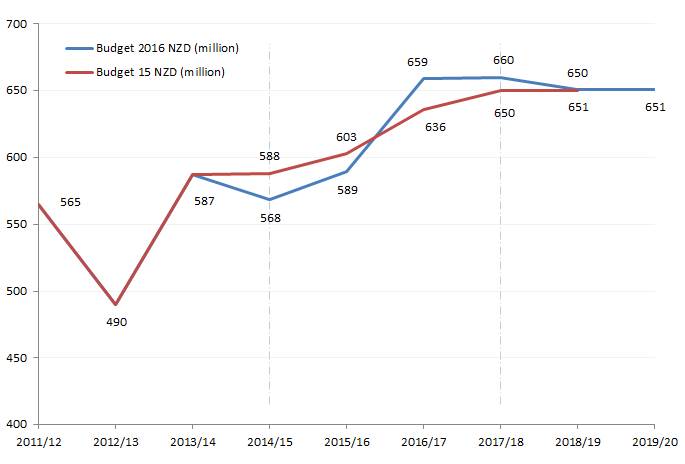 The blue line tracks past, present and future aid spending as outlined in this year’s budget; the red line is the same information from last year’s budget. Data are not inflation adjusted and budgeted figures are in New Zealand dollars. The two dashed vertical lines separate each three-year aid-spending appropriation. The lurch from NZ$589 million in 2015/16 (the current financial year’s estimated actual spend) to NZ$659 million in 2016/17 (next financial year’s budgeted aid spend) is the increase in question.

It’s indisputably an increase. But it’s only as large as it is because the aid programme came in under-budget in the 2015/16 financial year. Not only that, but in 2014/15 it spent NZ$20 million less than was anticipated when the 2015/16 budget was being drawn up (see page 6 here). (Which, it should be noted, is a big change in a short period of time.)

By now, readers with a good eye for geometry will be able to work out the source of the big increase in the New Zealand aid programme budget next financial year. As the red line shows, there is an overall upwards trend in the budget. (Although, as I showed last year, the trend itself vanishes if we look at ODA as a share of GNI.) However, the gentle upwards trend becomes a startling one next financial year only because the aid programme is racing to catch up and spend the last two financial years’ under-spends.

Is this a bad thing? It’s certainly good that the under-spent money is not being taken away. And (other than departmental spending) New Zealand aid programme spending is, in theory, appropriated in three year allocations, designed to allow some flexibility year-on-year. But we still produce annual aid budgets that are meant to offer a clear guide of anticipated aid spending in any financial year. Such substantial deviation from these figures is not intended practice. What’s more, as you can see from the location of the two vertical lines demarcating the current three year funding allocation, the overall spend for the current three-year allocation period actually changed between 2015/16 and 2016/17. This definitely shouldn’t happen.

So why is it happening? What is the explanation for New Zealand’s aid programme failing to meet its budgeted aid targets? If you want the official answer you could try looking in this year’s Estimates of Appropriations. Alas, beyond giving headline numbers, it is not an illuminating document. There are snippets of information on comparatively small changes to overheads, but even they reveal little, and beyond these snippets there is nothing intelligible.

However, if you don’t need the official explanation, there is an obvious enough candidate for the cause of the aid programme’s spending woes: Foreign Minister Murray McCully. Spending issues have been a persistent problem since he became the minister responsible for the aid programme, whereas they were not as pronounced previously. The minister has a reputation for micro-management, for dragging his heels on signing off on country aid allocations, and for breaking perfectly good funding mechanisms. And that’s the source of the current problems. The buck ought to stop with the minister, though it won’t.

There are other issues with the 2016 New Zealand aid budget too. Transparency for a start — considering the good aid data available at, or around, budget time in Australia, New Zealand ought to be doing a lot better in its own [pdf] efforts. [Update: there is additional, hard to find, country-level information on the NZ aid programme site; however, as best we can tell it is not annually updated.] There’s also the enduring presence (on page 16 of the Estimates of Appropriations document) of a target for spending on economic development as the sole sectoral target, which does no justice to the multifaceted nature of development. For now though, these are lesser issues than that of aid spending, which is not just an arcane problem only affecting budget nerds. It’s an issue with real world consequences: instability makes work harder for the countries that receive New Zealand’s aid, along with organisations like NGOs that play a role in delivering it.

It feels a pity to complain about a rapid rise in an aid budget. But in the upside down world of New Zealand aid, that’s the way it works at present. It’s good the budget is not going down, but this year’s increase is a symptom of problems, rather than a cause for celebration in New Zealand.