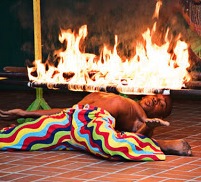 Judging from recent remarks by the finance minister, Senator Mathias Cormann, the government might be about to accomplish an overseas aid hat-trick. Cormann was quoted in the The Australian of Friday 18 October as follows:

We would expect the commission of audit to have a look at that and make recommendations on this and on all other such opportunities across government.

It’s surprising that Cormann would make such an explicit reference to a single and relatively small agency at the outset of a government-wide audit commission process. That he has done so tends to suggest that the government is contemplating even more substantial reductions than might have been expected in the number of people managing Australia’s aid program. If so, the program will have experienced three big losses in quick succession: an unprecedented within-year budget cut and future-year budget freeze, an erasing of the agency dedicated to its management and a jettisoning of much of that agency’s human capital.

Though the article that contains the Cormann quote, by David Crowe, gets some of the numbers wrong, Cormann’s statement of fact is correct. However, he is mistaken to imply that there is something dubious about AusAID’s staffing growth in recent years.

Consider the numbers. Cormann is talking about the five-year period from 2008 to 2012. Crowe says in one place that AusAID staffing numbers increased by 200 per cent over this period. In another place he puts the increase at 251.4 per cent. He gives the actual staffing numbers as 655 in June 2008 and 2,124 in June 2012, but notes the latter figure includes local staff at overseas posts. In fact it includes 596 such staff. If one excludes these locally-engaged staff in order to compare apples with apples, the increase over the five years is 133 per cent. That’s less than stated in the article, but it is certainly a large increase.

Over the same period the Australian aid program grew from $3,572 million to $4,825 million in constant 2011-12 price terms, a real increase of 35 per cent (and a nominal increase of 55 per cent, not 75 per cent as stated by Crowe). Thus Cormann can rightly say that AusAID staffing grew much more rapidly than the program AusAID was administering. To illustrate this, and provide some historical context, the figure below charts AusAID staffing levels from 1998 to 2012 against the size of the annual aid budget over the same period. 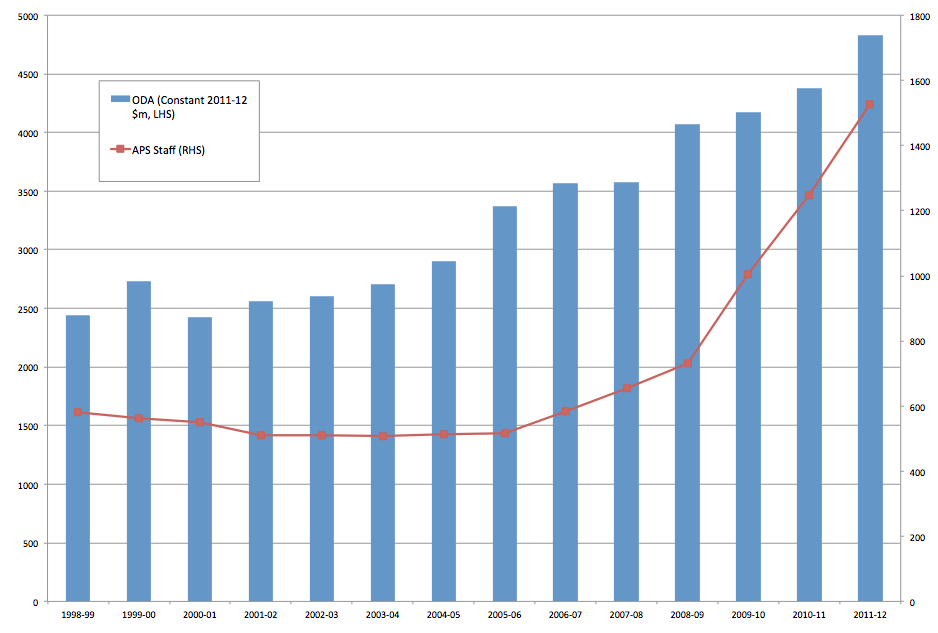 However, comparing AusAID’s staffing growth to aid budget growth year by year is not really to the point. The aid program is not a welfare program that engages more or less staff in response to variations in the number of people exercising their entitlements to public benefits. It is a development financing program that was, until quite recently, scheduled to grow to 0.5 per cent of Gross National Income, or more than $8 billion per annum, within a few years. Given that steep aid growth was government policy—indeed bipartisan policy for a while there—it would have been irresponsible not to put sufficient staff in place to plan for the growth and administration of a program of this size.

In other words, the staffing peak should have preceded, not coincided with, the aid peak. And it did. AusAID’s Chief Operating Officer said in response to a Senate Estimates question (p. 143) in October 2012 that AusAID had likely reached its peak staffing level in that year. This underlines the point that the agency’s staffing reflected government policy on future aid expenditure, combined with the need to plan responsibly for its allocation and oversight. It was not on a path of continuous and unconstrained growth.

At $8 billion or more the aid program would have been at least 130 per cent larger than it was in 2007-08. This, not the size of the program in 2011-12, is the relevant point of comparison when considering staffing growth over recent years.

None of the above is to argue that the Department of Foreign Affairs and Trade (DFAT), now custodian of the aid program, can reasonably be expected to dedicate over 1,500 staff to the management of what the government says will be a static program of around $5 billion per annum for the next few years. For a start, the integration of AusAID into DFAT will yield some efficiencies in the provision of generic corporate services. The efficiencies certainly will not end there. So, how many positions might be cut overall?

Attempting to answer that question by looking at other bilateral donor agencies is a mug’s game. Each agency carves the aid management cake very differently, with some doing just about everything in-house and others relying heavily on private contractors whose costs are charged to programs. Nobody has yet devised good international benchmarks in this area.

One indicator might be the level of staffing that prevailed at the end of the Coalition’s previous term. As at June 2007, there were 583 staff in AusAID managing a program of $3,567 million (constant 2011-12 prices). That’s $6.1 million per staff member. If the program is to be around $5 billion per annum from now on (about $4.8 billion in 2011-12 prices), such an aid-to-staff ratio would imply a staffing complement of about 785. That number might be discounted somewhat to account for efficiencies associated with the merging of corporate services, but let’s discount conservatively and say the ball-park figure is 750. That’s about half the mid-2012 level of 1,528.

The problem with the above indicator is that its baseline year was one in which AusAID staffing was quite out of step with the size of the aid program. The Howard government pledged in 2005 to double aid by 2010. It delivered large aid increases in the following two budgets, but these were not immediately accompanied by commensurate increases in AusAID staffing. A slightly better indicator, therefore, might be the level of staffing that prevailed up to 2005. Take, somewhat arbitrarily, the seven-year period from 1998 to 2005, during which agency staffing was quite stable and averaged about 530. The aid-to-staff ratio in this period averaged $4.9 million (constant 2011-12 prices). Using that ratio, a program of around $5 billion (which, as noted above, is $4.8 billion in 2011-12 prices) would be administered by about 975 staff, or say 950 or so without standalone corporate services. That’s about two-thirds of the mid-2012 level.

A reduction near the upper end of the range defined above would place Australia’s aid administration on much the same footing as the United Kingdom’s Department for International Development, where the aid-to-staff ratio has fluctuated between $6 million and $8 million over recent years. However, it should be noted that DFID allocates a high share of UK aid to multilateral funds and programs, which are far less management-intensive. Even with this, DFID is still widely regarded as overstretched. Australia currently provides a low level of aid as core contributions to multilateral organisations (only the US provides less), and the Treasurer has signalled it will provide even less under the current government.

Might reductions of the magnitude indicated above actually be considered? If the government wants a prudently managed and bilaterally-oriented aid program, it certainly should not contemplate cuts approaching the upper end of the range. The aid-to-staff ratio at the end of its last term was much too low. Whether the government returns to levels of staffing proportional to those that prevailed before Australia’s aid expansion began in 2005—still one-third below current levels—should depend not on crude arithmetic but on what it wants to achieve with the aid program. It can’t be expected to have a complete and clear vision of that just yet but, by the same token, it might be expected not to cut too quickly or deeply before its aid policy objectives have taken shape. Cormann has, after all, described the audit commission as a ‘calm, methodical and structured process’.

A final point to note is that because the aid management budget forms part of the aid budget, savings on staffing don’t add anything to savings extracted from programs. Once the government determines its aid envelope for a given period, any savings on the departmental side during that period simply translate into an equivalent amount of additional expenditure on the program side. All governments, of whatever stripe, obviously want to maximise program spending and minimise administrative spending. However, if the aid program is in fact to be held constant at around $5 billion there is no bottom-line benefit in making hasty cuts that could reduce the effectiveness or utility of the aid program, and increase fiduciary risk.

Cormann’s remarks were striking but perhaps ephemeral. We’ll have to wait on the outcomes of the audit commission. However, if major staffing reductions are in prospect, it’s to be hoped DFAT is devising strategies for keeping AusAID’s most experienced, knowledgeable and capable staff in the organisation and in development policy and management roles. They are precisely the people who tend to have other options.

Robin Davies is Associate Director of the Development Policy Centre. Thanks to Jonathan Pryke, Research Officer at the Centre, for assistance with data.