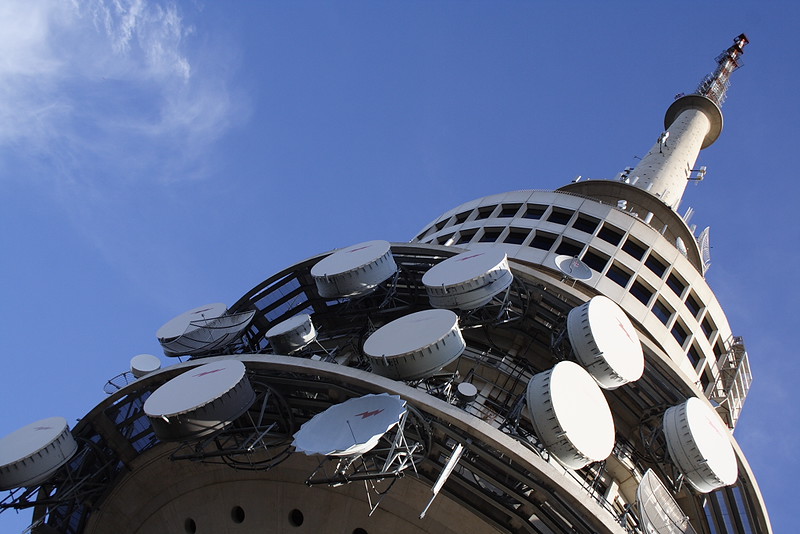 Looking up the Telstra Tower in Canberra, Australia (Prescott Pym/Flickr)

On 25 October last year, Telstra and the Australian government agreed to pay US$1.6 billion (A$2.1 billion) for Digicel Pacific. The acquisition was widely reported at the time, but there has been little analysis of the terms and conditions since. Using publicly available information, we show that the Australian government has signed off on a high-return, low-risk deal for Telstra.

As Digicel is a privately held company and financial information about it is limited, our analysis is based primarily on Digicel’s 2020 debt-restructuring filing to the US Securities and Exchange Commission, and Telstra’s media briefing on the acquisition. Our aim is to calculate the deal’s internal rate of return (IRR) – a key measure of the expected profitability of any project – for both the Australian government and Telstra.

Based on the best assumptions we could make based on information in the public domain (see the notes at the end of this post, and the accompanying spreadsheet), our model estimates an IRR of 9.4% for the deal as a whole, which could be described as modest. But how do each of the two parties (Telstra and the Australian government) fare? Telstra itself will only contribute US$270 million of the $1.6 billion total, with the Australian government funding the remaining $1.33 billion (all figures in US$).

Telstra executives made it clear at its press conference that, under the agreement with the Australian government, it is entitled to receive dividends of $45 million in preference to all payments to the Australian government for the first six years (that is, until it has its investment back). Telstra executives also said that the Australian government will lend it $720 million at a “competitive” interest rate “modestly below Telstra’s blended cost of debt”. Telstra’s press conference remarks indicate that $360 million will be given at a fixed return (with a “coupon rate” that Telstra says is “a level of a bit above our current cost of debt”). The final $250 million is subordinated equity.

This high expected return is virtually guaranteed, as Telstra is taking almost none of the risk. Among the protections being provided by the Australian government are: almost full protection of Telstra’s cash flow in the first six years; partial protection after that by the provision of fixed-return equity; provision of political risk insurance; and protection throughout via assumption of all the foreign exchange risk. The difficulties of repatriating dividends from PNG operations are well known. That job of converting kina to Australian dollars will fall to the Australian government rather than Telstra.

We also ran a scenario analysis with low and high cases. In the high case (after factoring in the additional payments that have been agreed in this scenario), Telstra’s IRR is 24%; in the low case it is 14%. In other words, even the downside is attractive, and the upside is mouth-wateringly so.

Despite walking away with such a high-return, low-risk deal, Telstra is under no obligation from the Australian government to expand PNG’s mobile phone sector, or to provide better services, or to reduce prices. Having been threatened by the PNG government with a monopoly tax, Telstra has recently undertaken to expand Digicel’s network of towers, but it may well be that this further increases its profits. The real test will be whether Telstra is prepared to reduce prices, as Digicel has consistently failed to do in recent years.

The Australian government subsidy to Telstra provides a new benchmark in the retreat of economic principles from the policy domain, and their replacement by unspecified security concerns. For this corporate welfare deal to go through, it was sufficient that Telstra is Australian not Chinese.

Limited historical data is available on revenue growth. We assume revenue growth of 3% from FY22-23 to FY34-35, equal to the revenue growth rate in FY18-19 in PNG, Digicel Pacific’s biggest market. We also assume that the EBITDA (revenue minus costs other than tax, interest, depreciation and amortisation) would be 56% of revenue. This is above the three-year average from FY18-19 to FY20-21 of 50%, since the PNG government has estimated higher profits for Digicel under Telstra ownership due to an end of licensing (profit shifting). Working back from the estimated increase in tax ($11 million; all figures in US$), this implies an increase in the EBITDA ratio from 50% to 56% in the base FY22-23 year. Digicel reports on an April-March financial year, but we follow the Telstra July-June financial year, assuming that the purchase of Digicel occurs in FY21-22 and that the first year of operation of Digicel by Telstra is FY22-23.

Capex to sales is assumed at 15%, as per the media briefing. Depreciation and amortisation (D&A) to capex is assumed at 1.25, as per the Digicel Group’s ratio in FY18-19, and consistent with Telstra’s comment on the subject that Digicel Pacific has “structurally lower capex than D&A”. The terminal net cash flow rate is 0.5% from FY35-36 onwards.

Liabilities consist of a pre-existing $95 million Digicel PNG facility for the period from FY19-20 to FY24-25, and the $720 million loan from the Australian government. Telstra executives said that the interest rate on the latter will be “modestly below Telstra’s blended cost of debt”. Since Telstra’s average cost of debt is 3.8%, we assume the cost of this government debt to be 3.5%. $360 million from the Australian government (GoA) will be given at a fixed return (with a “coupon rate” that Telstra says is “a level of a bit above our current cost of debt”). We assume 5%. In terms of seniority, it is assumed that Telstra must get its guaranteed $45 million per year; then the GoA loan is paid back, then the GoA coupon-paying equity, and then the GoA subordinated equity (assumed to get the same return as the Telstra equity after the first six years). All profits are returned as dividends, and PNG applies a corporate tax of 30% and a withholding tax of 15%. The IRRs are before tax in Australia.

In the high case, revenue (terminal cash flow) growth is 10% (1%), and in the low case 0% (0%), compared to the base case’s 3% (0.5%). In the high case, the trigger for $250 million in additional (earn-out) payments to Digicel is activated. We assume $50 million of this is equity from Digicel and $200 million from Australia, based on the announcement that the earn-out payment will be shared between the Australian government and Telstra on an 80/20 basis. We assume that these additional payments are in the form of equity and do not affect the distribution of dividends. 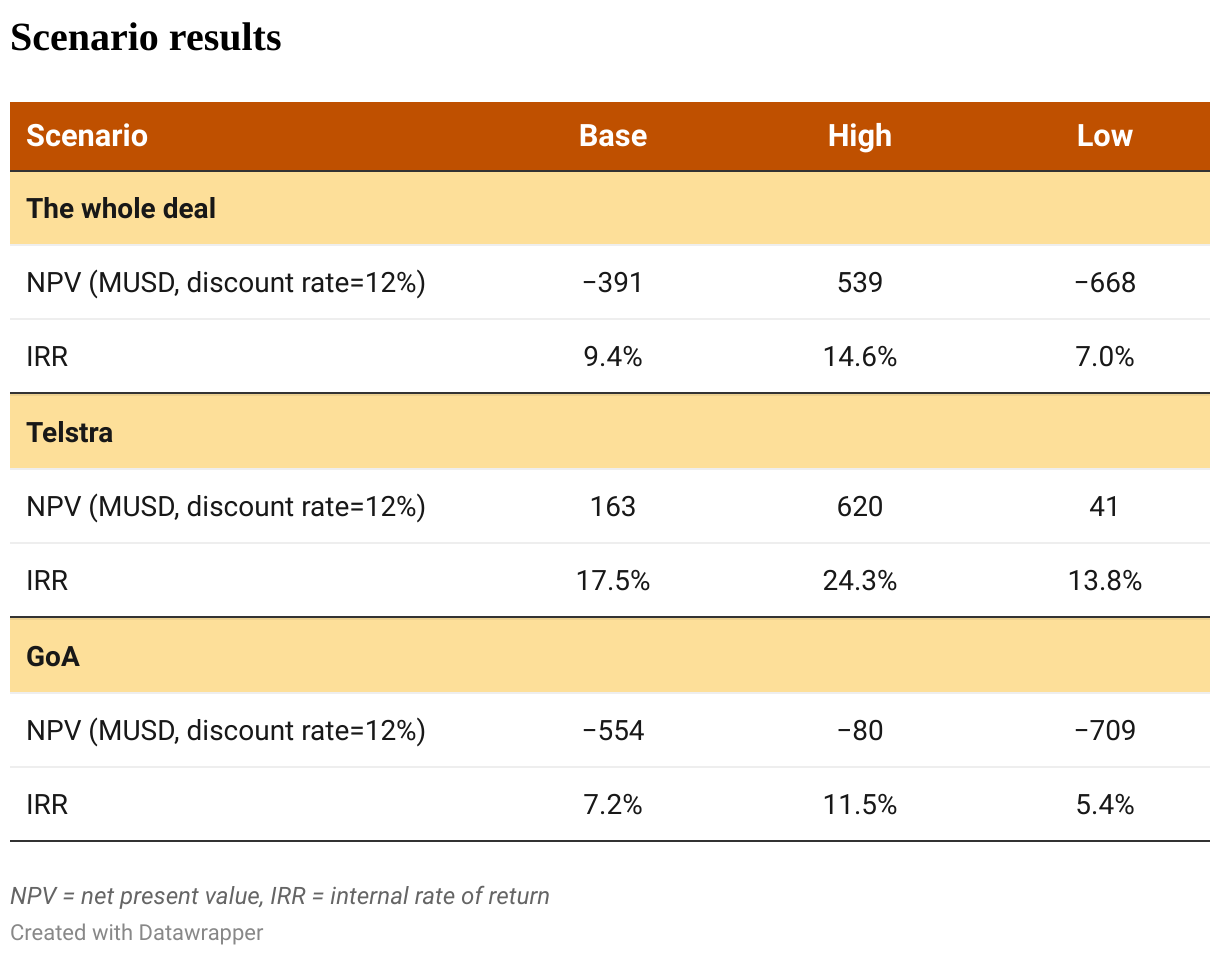 Data and calculations used in this blog are available in this Excel spreadsheet.

Neither the Australian government nor Telstra responded to requests for comments.