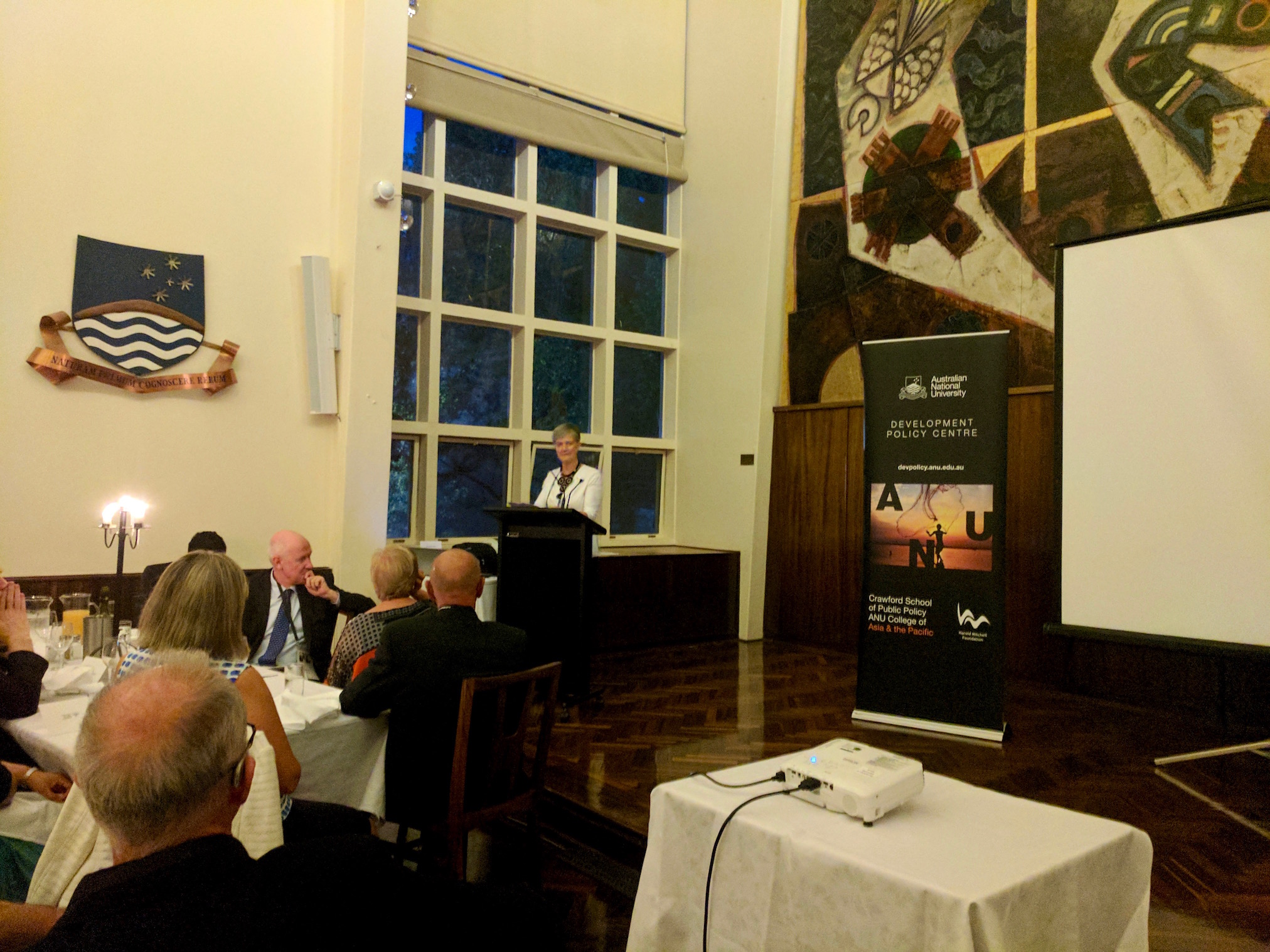 The inaugural Mitchell Humanitarian Award was presented to veterinarian and Sydney University academic Dr Robyn Alders in a ceremony at The Australian National University on Wednesday night, recognising her career-long efforts to protect village chickens in developing countries from a deadly but preventable disease.

The Mitchell Humanitarian Award is a new annual award that recognises Australians and others supported by Australian aid who have made an outstanding contribution to the cause of international development. The award is named after Mr Harold Mitchell AC, a leading Australian businessperson and international philanthropist. A distinguished selection panel chooses the awardee. The panel is chaired by Ms Stephanie Copus-Campbell, Executive Director with the Oil Search Foundation, and includes Ms Jo Chandler, award-winning journalist, and Mr Bob McMullan, former Parliamentary Secretary for International Development.

Dr Alders began her work on Newcastle disease control in 1989 shortly after graduating from The Australian National University with a PhD in veterinary immunology. Over a period of two decades, and with support from the Australian aid program, she first trialled and then rolled-out a new vaccine developed by Australian scientists to prevent village chickens from the deadly Newcastle disease. The number of chooks vaccinated in the three countries she worked in rose from 1 to 20 million, bringing millions of dollars to the poor families that rely on their chickens for protein, micronutrients and cash. Dr Alders is now supporting efforts to roll-out Newcastle disease control programs throughout Africa and Asia.

Dr Alders, currently an Associate Professor at the University of Sydney, was awarded the prize at the 2017 Australasian Aid Conference dinner attended by 200 people at the ANU University House Great Hall.

Announcing the winner, Harold Mitchell AC said “I’m honoured to have this award named after me, and to present it for the first time to Robyn Alders. Her story is exactly the sort that we want to highlight – Australians making a difference regionally and globally, through their innovation and their dedication. We don’t celebrate enough what we have achieved in international development through modest amounts of money supporting some fantastic people and initiatives.”

Receiving the award, Robyn Alders said. “This is an amazing honour. It’s a recognition not just of my work, but of the many colleagues, partners and farmers who have understood the importance of and contributed to improving family poultry health over the years.”

Dr Alders was presented with the 2017 Mitchell Humanitarian Award trophy and $10,000 to a cause of her choice.