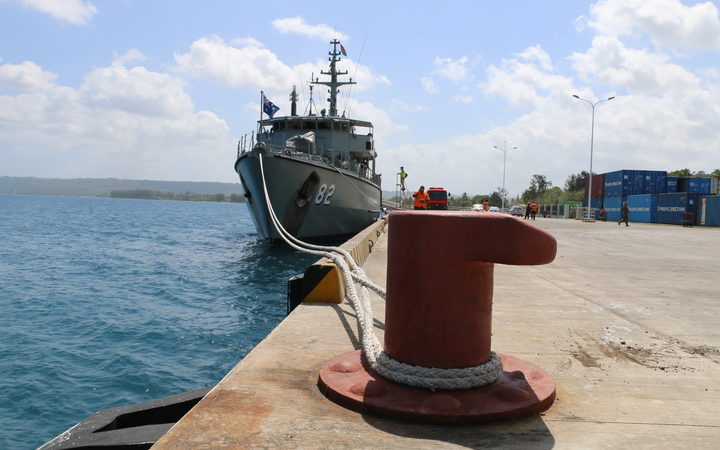 This year has seen intense media scrutiny of Chinese aid to our Pacific Island neighbours. The focus of such coverage has been squarely on Chinese ‘threats’, be they debt-related or military in nature. Some of the coverage has bordered on the hysterical.

For a region accustomed to being ignored by the Australian press, it is a big change to the status quo, though not necessarily a positive one. For every story in which the Australia press has chosen to focus on non-issues, there has been a failure to report on subjects that actually matter and affect our relationships with Pacific Island states — the response to climate change being a case in point. More than that, our relationships with the Pacific, whose leaders and citizens have always been sensitive to condescending remarks from the region’s big brother, have suffered every time Pacific Island states are talked about as if they are unable to manage their own affairs.

Coverage of the construction of the China-funded Luganville wharf in Vanuatu has been especially egregious. Claims by Fairfax that the Vanuatu government was in preliminary discussions with China about “a military build-up” – claims that were unsubstantiated, and swiftly denied by the Vanuatu government – have been accompanied by a series of articles that expressed alarm about Chinese aid to Vanuatu (see here, here, here and here). A key focus has been the construction of the Luganville wharf, which having been built to dock cruise ships which frequent Vanuatu’s waters, can also dock naval vessels (as recently occurred when the Australian navy offloaded aid supplies in response to a volcanic eruption in Ambae, Vanuatu).

Never mind that the Vanuatu government has clearly stated the wharf has no military purpose and that Vanuatu intends to continue its long history of non-alignment. Never mind the fact that an exasperated Vanuatu government publicly released the contract for the wharf in order to show there was no debt equity swap clause that could force it to give up the wharf in the event of a default on the loan (thus showing the media’s comparisons with Sri Lanka to be unfounded). Australian media coverage of the non-story has continued unabated.

Enter 60 Minutes the week before last with a story about “The sneaky tactics behind the rising global power’s latest master plan.” In what can only be described as a mediocre report, made over a month after other media sources had already reported on the wharf, 60 Minutes again makes the discredited claim that Vanuatu could be required to cede control of the wharf should it default on its debt. A claim already discredited by evidence from the Vanuatu government. A claim based on the idea that Vanuatu faces a debt crisis, which the International Monetary Fund has said it does not. Somebody call Media Watch please.

Coverage of Chinese activities in the Pacific has also led to changes in the way the press reports on Australian aid to the region. The aid budget, which this year suffered its fifth cut in a row under the Coalition, nevertheless saw a small increase in funding for the Pacific. Most major news outlets ran stories linking this increase to geopolitical competition with China. The Australian, which has provided longstanding criticism of Australia’s “wasteful” foreign aid, suddenly featured articles that were critical of the cuts on the grounds that declining aid has opened the door to Chinese aid funding in the region.

For someone who believes that aid, for all its faults, can be of real benefit to poor people, this shift in the stance of the conservative press has been somewhat welcome. It has no doubt broadened opposition to cutting the foreign aid budget any further, even if it is hard to argue the case for more aid in a region that already receives very high levels of development assistance (though supplementing grant-based Australian aid with a development finance facility, as argued by Bob McMullan, is an idea with merit).

At the same time, this focus on Chinese aid to the region has been damaging to how Australia is seen by the Pacific. References to ‘our patch’, the focus on Australia’s security to the exclusion of all else, the condescending coverage of Pacific Island governments and leaders — all of these confirm the worst of how Australia and Australians are viewed by the Pacific. All serve to undermine our relationships with the region.

What could Australia do differently? Better reporting would be a good start, and would be helped by a greater media presence in the region. The decline of Australia’s media presence in the Pacific is well-documented. Australian reporting on the Luganville wharf has either been done remotely or has relied on fly-in fly-out visits to Vanuatu. The quality of reporting has no doubt suffered as a result (interestingly, a review of Australian media services in the Asia-Pacific has recently been announced — submissions can be made here).

An improved understanding of the region among Australians would also help. Papua New Guinea is Australia’s closest neighbour, sitting just five kilometres from Boigu island in the Torres Strait. Yet the average Australian knows next to nothing about our northern neighbour. Our education system is partly to blame. With the exception of Kokoda, Australians are far more likely to be taught in school about European history than about that of our immediate neighbours. At the tertiary level, units of study focused on the Pacific are few and far between (ANU is the only tertiary institution in Australia to teach Pacific Studies, a point of contrast with the situation in New Zealand). This needs to change.

Inevitably, and as noted by the Foreign Policy White Paper, stronger relationships with the region must be built on people-to-people links. This is where migration policy is important. Australia’s emphasis on skilled migration, coupled with stringent visa requirements for Pacific Islanders, has historically kept Pacific Islanders, and Melanesians in particular, out of Australia. In the 2016 Census, just 23,000 residents claimed Melanesian ancestry – a remarkably small number, given that PNG (population about 8 million) is a former colony and on Australia’s doorstep. Contrast this situation with New Zealand, which has a large Pacific population, owing at least in part to special migration pathways that are available to Pacific Islanders, such as the Samoa Quota and the Pacific Access Category.

If Australia is serious about its engagement in the region, it needs to consider what more can be done to build people-to-people links and increase Australian’s understanding of the Pacific. That means teaching our kids about the Pacific, dedicating resources to reporting on the region, and importantly, discussing migration policy as it relates to the Pacific. One thing is for certain: jumping up and down whenever Pacific Island governments turn to China for a piece of infrastructure is not a strategy that will win us friends or influence in the region.