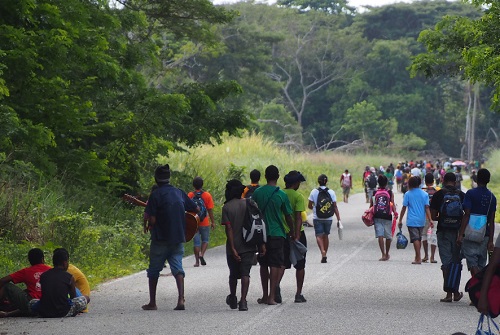 The O’Neill government has done its best to protect its flagship Tuition Fee Free (TFF) policy during the current fiscal crunch in Papua New Guinea (PNG). Despite substantial funding cuts to many core government services in recent years, government funding of around 600 million kina for the TFF policy has been maintained in the 2017 budget at much the same level (in nominal terms) since its introduction in 2012. But there is a difference between budget allocations and actual release of government funds in a timely matter, as is becoming increasingly apparent in PNG.

Cash flow problems have meant that salary payments to public servants have been late, teacher holiday leave fares unpaid, road funding delayed, and payments of MP funds delayed. TFF payments to schools have not been immune; for example the Department of Treasury only released the warrants for the release of the last quarterly TFF payment of 2016 in December, only days before the end of the school year (see also here and here). The problem is that schools in PNG have been directed by the National Department of Education (NDoE) to not charge school fees, and so delayed TFF payments to schools have resulted in reports of schools closing and students sent home.

In May 2016, one of us – Grant – witnessed the impacts of problems with school funding first hand in Central province. On the way back from fieldwork in Gulf province, he and other researchers came across a throng of young people clutching bags and slowly walking along the Hiritano highway, which links Port Moresby to the capital of Gulf province, Kerema (see photo above). In response to questions about why they weren’t in school, students said that their teachers had sent them home to collect money for school fees from their parents. Students in lower secondary school were asked to bring back 50 kina, and those in higher grades were to return with 100 kina. According to the students, the school had run out of money; this, it was suggested, was likely due to late payment and poor management of TFF subsidies.

Recent research in Gulf and East New Britain provinces showed that some schools are also quietly charging fees, including school and project fees.

In expectation of TFF payment delays continuing, the Education Board in PNG’s largest province, Morobe, has now announced that all schools in the province will be required to impose school fees in 2017 to make up for shortfalls in TFF funding.

This decision certainly makes sense as a short-term solution to ensure that schools are able to access resources (such as water, classroom materials, and electricity) to keep them functioning. The question now is whether other provincial administrations will come out and defy the national government’s official position and reinstate school fees. If more provinces join Morobe then this will likely result in a broader unravelling of the TFF policy.

There is some dispute about the ability of provinces to themselves set school fees independent from the national government. A letter contesting NDoE’s ban on any imposition of schools fees was published in the Post-Courier newspaper by the Catholic Church in May this year. The letter – addressed to the prime minister and signed by the President of the Catholic Bishop’s Conference of PNG, Bishop Arnold Orowae – argued that NDoE’s order transgressed the national Education Act, and Provincial Education Acts in the 13 provinces where these are in place.

With the NDoE’s 2016 TFF policy promising to redirect 60 per cent of school payments to districts and national administrators, it is likely that many more schools will feel a need to charge school fees (if they are not already). There are also reports that some are finding other ways to make up for lost revenue through unofficial transfers. The school fees imposed by Morobe’s administration is just another indication that parents are increasingly being expected to pay for the cost of schooling, whether the charges are official or not.

To some degree, sorting out the problems associated with TFF payments will fall to the NDoE. The department’s bureaucrats should be directly engaging with Morobe’s administrators as well as Treasury officials, and looking for ways they can help ensure payments get to schools on time. The decision earlier this year to disperse TFF payments on a quarterly basis is a step in the right direction but, on its own, not enough.

While bureaucrats explore potential fixes, there are likely to be broader consequences for the current government. With the 2017 national election looming large, an unravelling of the TFF policy could result in significant reputational damage, and hamper some MPs’ chances of re-election. In addition, it may result in instability amongst the large coalition of MPs in government.

The TFF policy’s unravelling would likely impact on post-election wheeling and dealing associated with forming a coalition government. The current TFF policy was a key part of the government’s 2012 Alotau Accord [pdf] (which laid out the priority areas for the new then government), and was a likely (but certainly not the only) factor in current Prime Minister Peter O’Neill securing a strong coalition of MPs to form government in 2012. The TFF policy also helped O’Neill differentiate himself from his predecessor, Sir Michael Somare. If the TFF policy is seen to be failing, this may give MPs one more reason not to back O’Neill to head the government after the 2017 election.

Previous governments in PNG have lived and died on their ability (and subsequent inability) to sustain “free education”. Will this fourth attempt at free education go the same way as the previous three failed attempts? For now, we will just have to wait and see.