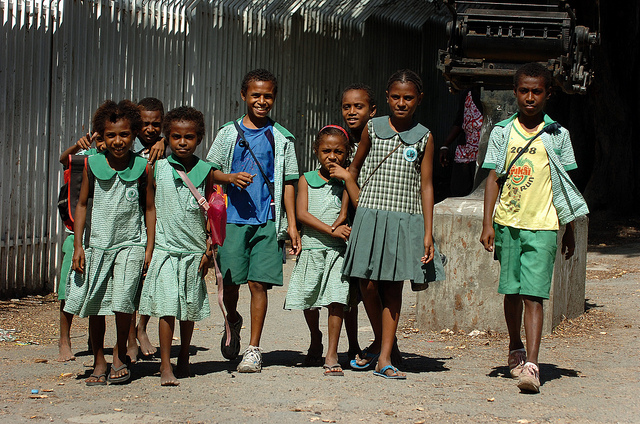 A friend of ours since the late ‘90s, Kenny is a peanut seller at the local Goroka market. He, his wife Sera, and their two children moved from a remote part of Okapa district to Goroka a few years ago. Their reason for moving was to ensure their children would be able to go to a school that could be relied upon to be open for most of the school year. A few days ago he visited our home to recharge his solar pack from our mains power after three days of grey skies. Over a cup of tea we caught up on family news and the latest travails in supporting his children to go to school.

Kenny and Sera have a niece whose father left the family, leaving her, her siblings and her mother in a precarious financial position. No longer able to afford the “project fees” of the school she had been attending in one part of Okapa district (“A good school – the teachers are usually there”), she had been attending another school (“It’s up and down. Sometimes open and sometimes not”). On a recent visit Kenny and Sera could see the worry in their niece’s eyes, and then heard from others that she had been secretly calling her father, who now lives in Moresby, pleading with him to help pay for her education. So far he hasn’t. Kenny and Sera felt very sorry for their niece, so they spoke with their two children and asked if they would mind if the niece came to live with them in their small bush-materials house. Their children agreed that this would be the right thing to do. Since last week Kenny and Sera have started supporting their niece and their own children to attend Goroka schools. Each afternoon the three children return from school and do chores (laundry, food gardening, fetching water, cooking), then eat dinner, and before bed they study and do their homework by the light of a solar lamp.

What, then, is now involved in getting a child enrolled in the government schools that Kenny and Sera’s children attend? Now, it requires bribes. K100 to get Kenny’s niece accepted before her transfer letter, which may take some time, has been received. K15 or K20 quietly paid to the person processing the paperwork for re-enrolling each child. Then “project fees”, paid in cash. The government has restated its policy of no school fees and no project fees – but this is not the reality for the schools that Kenny’s children attend, nor apparently for many other government schools in Goroka. In Goroka, and indeed more widely through Eastern Highlands Province, it is widely reported by parents that if you don’t pay “project fees”, the chances are that your child’s enrolment won’t be processed.

For rural schools in the Eastern Highlands, a big task at the start of each year is to get teachers. This has been the case since at least the late ‘90s, when my partner and I were first working on projects specifically on establishing and supporting elementary schools. Again, for the past couple of weeks, the streets of Goroka have been full of school representatives searching for willing teachers, and teachers who are (in Kenny’s words) “marketing themselves”. This means they are on the streets and in marketplaces awaiting offers from needy schools. Generally, if teachers have an urban posting they will take up that posting. If they have a rural posting, despite their official posting, some of them are open to better offers in other locations. In some of the remote places I am familiar with, school boards of management send delegates to Goroka to persuade, pay, and accompany teachers back to their schools. Payments are in the order of K3,000. To make these payments the schools must either “misuse” any Tuition Fee Free funding (TFF) they have managed to save from the previous financial year, or rely on the illegal collection of project fees.

In an environment where public servants may not be paid, or at least not paid when they should be (as happened in late February); where (in my own and my colleagues’ experience over the past few years working in education in the Eastern Highlands) the government TFF payments to schools come late and allegedly not in full; where teacher postings are finalised after the school year has begun (postings were available for Obura Wonenara district elementary teachers two weeks into the school year); where postings have then been potentially invalidated following politicised changes of senior administration positions; and where teachers must make their own way to the schools they have been posted to, then corruption finds fertile ground. It is not reasonable to expect parents not to pay bribes if that is the only way to get their child into school. It is not reasonable to expect schools not to charge project fees if that is the only way to start the school year without having yet received TFF funds, or to ensure some teachers actually come to the school at all.

Kenny asked me some questions too: “In Australia, how do you make sure your daughters’ school has teachers? What happens in Australia when the teachers don’t turn up? Do you have to pay something extra for your children to enrol or to get their results?” Even though the laws and processes that govern all this are similar, in Australia I can take for granted that it works, and I have recourse if it doesn’t. Kenny and Sera, and all the other parents in PNG, also deserve to be able to take for granted that their children’s access to education is guaranteed.