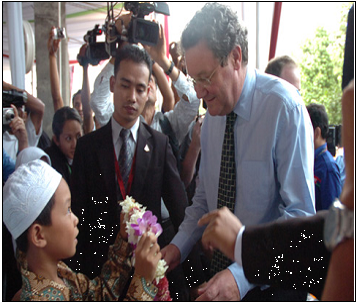 Indonesia is a major recipient of Australian investment in construction for education. Construction was a substantial part of the $395 million spent on the Australia Indonesia Basic Education Program that closed in 2010, and at least $56.5 million has been spent on construction in the new Education Partnership since 2011.

Where is the evidence that the construction of schools and educational facilities is effective development? Does it lead to sustainable quality improvements in education? The short answer is we really do not know. And, if we really do not know, why is Australia committing millions of dollars in aid in the form of school buildings; is it simply a way to spend large chunks of aid money?

Part of the answer may lie in photographs like this: a beaming politician at a donor-supported school, surrounded by delighted officials and grateful children – an illustration of the ‘edifice complex’.

In his book The edifice complex, (New York: Penguin, 2005), Deyan Sudjic argues that architecture is a powerful means of communication. Buildings impress the viewer and enhance the importance of the builder. AusAID’s response to the Independent Completion Review of the School Reconstruction Program in West Java and West Sumatra (2009 – 2011) demonstrates this: “For branding purposes, plaques located within the school compound is (sic) less effective. Larger distinctive national logos (kangaroo, etc.) outside the school entrance would highlight the GoI, Australian and USA contributions and links …”

Construction in education development projects should meet some fundamental educational criteria. The focus on numbers, engineering standards, contracting and finance is important but insufficient. Educational criteria should include at least the following: a demonstrated need, improved access to education, buildings designed to contribute to improvements in the quality of the educational experience and outcomes, and sustainable educational benefits in the longer term. Is this too much to ask? In principle, certainly not, in practice, yes, it would appear so.

There are lessons from experience in Indonesia.

How do we know where to build schools? If we ignore the possibility of making location decisions based on patronage and corruption, we need access to accurate data. This is in short supply in developing countries. In Indonesia, data for this purpose is notoriously unreliable and sometimes fabricated. The final design document for Australia’s Education Partnership with Indonesia acknowledges this difficulty by noting that Australia and the European Union have assessed Jakarta’s ability to generate accurate and reliable information for the education sector as ‘moderate to low’ (p.38).

In the recent USAID Decentralized Basic Education – 1 (DBE1) project, it was discovered that district governments were able to accurately analyse requirements for teachers, school assets and maintenance using new data management tools developed with DBE1 assistance. Before using these new tools, districts simply did not have reliable data for planning. One district that was planning to build new schools reported that it actually needed to close or merge schools after it analysed its new and accurate data! Furthermore, as it is the districts that are largely responsible for managing schools in Indonesia, decisions reached between the distant central government and donors are at risk of being uncoordinated and poorly aligned with local needs and capacities to staff, operate and maintain new schools.

These matters all raise questions about how large-scale construction programs are able to confidently determine where new schools are really needed.

This is where construction programs do well. There is evidence of short-term success. One example is in Indonesia where the 2010 Independent Completion Report for the Australia Indonesia Basic Education Program confirms that 2,014 schools were constructed and 330,000 new places created. These are good, immediate results.

However, we do need to know whether these assets continue to have sustainable impact in providing access in the longer term. Is there a continuing need for the school? Is the use for which it was built still relevant? Are structures supportive of children with a disability? Are these schools well maintained? Do they close? Do any collapse, as is so frequently reported in the Indonesian media? We struggle to answer such questions for want of information.

Criterion 3: Contribute to improvements in the quality of education

There is no strong body of empirical evidence that has tracked the impact of construction in aid on educational quality. There ought to be. Evaluation tools, such as the post occupancy evaluation approach, are available but rarely used. A recent study of schools in Nigeria is an exception.

What little evidence that is available is limited. Using wages and years of education as proxies for quality, Esther Duflo found that each primary school constructed in the massive 1970s schools building program in Indonesia contributed small increases to human capital of, per 1,000 children, about 1.5 – 2.5 months of education and a 1.5 – 2.7% increase in wages.

We should be more concerned about how school buildings work and are used by children and teachers. There is evidence that design has a positive impact on learning, yet innovative designs are not in strong evidence. The Green School project in Bali is one exception that provides many stimulating ideas for donors to consider. The priority to build more schools, at the least cost, needs to be balanced with stronger consideration of the power of the building-student interaction in improving learning outcomes.

The sustainability of construction programs in education has not been properly evaluated. But what little evidence is available reveals serious challenges to be addressed.

A survey conducted in 2002 of a Japanese-funded school construction project in Indonesia shows that the initial quality of two thirds of the schools surveyed was unsatisfactory or worse. This frank report touches on quality as well: “… the condition of school facilities affects student satisfaction with school life, the number of classes per school, enrolment ratios and other factors, which in turn influence the quality of education (p.7)”.

If this is the initial quality, one can only wonder about longer-term outcomes.

Some further clues come from my own direct experience. In an audit of the ADB funded Marine Sciences Education Project in Indonesia, we found evidence at each participating university of poorly maintained, unused and abandoned facilities after only 5 years from completion. A new research station in North Sulawesi was so dangerous to life and limb that it had been completely abandoned. A corrupted construction process was the culprit in this case.

In the ADB Decentralized Basic Education Project, schools rehabilitated their structures from project grants. Yet, within four years, many schools showed evidence of need for further rehabilitation. One school in Bali was being rebuilt because the Jakarta-approved design was too dark and poorly ventilated (see photo below). 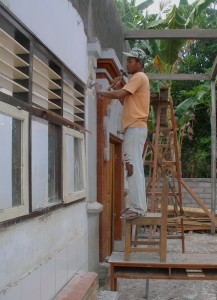 Sustainability of facilities was often impossible due to poor design. The arid conditions in eastern Indonesia meant that centrally determined Ministry standards for schools and their toilets could not be met, as standards specify toilets using water. There was not enough water to service the toilets!

There are two main conclusions to be drawn.

First, should we stop construction in education? No. Short-term benefits such as improved access have been demonstrated. On the other hand, there is no clear evidence that it is an effective longer-term development strategy.

The real problem is that after so many years of experience we still do not have good, country-specific, information upon which to base our development strategies. In Indonesia, there is little evidence about how school construction achieves sustainable access to quality education and whether the quality of learning in new facilities is enhanced. On the contrary, donors themselves have provided sufficient evidence in their own reports, discussed above and more fully here and here, to raise doubts about construction as a sound strategy for improving educational quality. Simply providing access to new schools that do not contribute to quality learning outcomes for children is an outcome now being questioned in the literature on development.

Second, it follows that we need much more country-specific evaluation and research on impacts, sustainability and good practice lessons for the future. The present situation in construction stands in marked contrast to reporting on scholarships where outcomes and impact are addressed.

The words of Roger Riddell are relevant to school construction in development. He sums up his massive review of aid in his book Does foreign aid really work? (Oxford, 2007) as follows: “The benefits of much official aid have been predominantly due to its success in addressing short-term, gap-filling needs. There have often been major difficulties in achieving longer-term sustainability … (p. 253)”.

Drawing on a broader literature, and looking at infrastructure in the Pacific more generally, Matthew Dornan has addressed why these longer-term difficulties may exist in an earlier and very thoughtful post for the Development Policy Blog here. It is well worth returning to Matthew’s work on these issues.

Robert Cannon is an Associate of the Development Policy Centre.