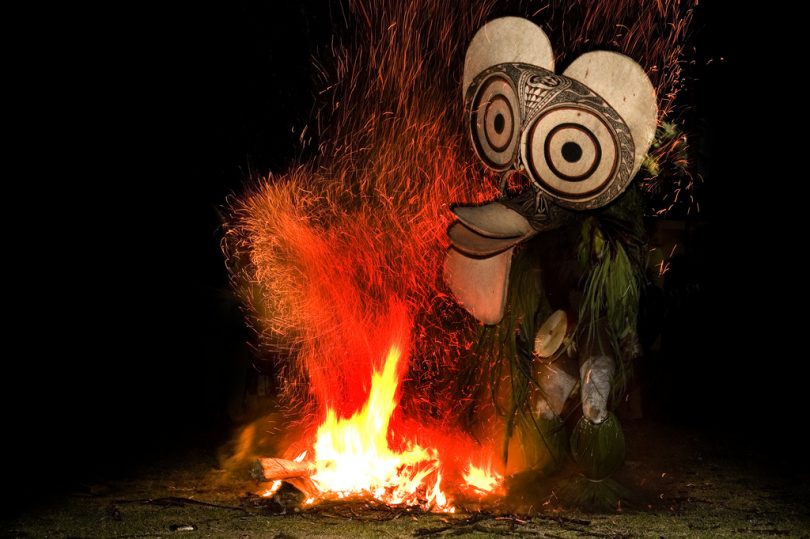 Fire dancer from the Baining tribe, PNG (Taro Taylor/Flickr/CC BY 2.0)

In a globalised world, how are inequalities produced, experienced, and reinforced? It’s a big question for a small book, but one which Paige West admirably takes on in her 2016 essay collection, Dispossession and the Environment: Rhetoric and Inequality in Papua New Guinea. In it, West, a Professor of Anthropology at Barnard College and Columbia University in New York, draws on two decades of ethnographic fieldwork in PNG, primarily with Gimi-speaking peoples, as well as her involvement as a co-founder and board director of a national NGO there.

In short, as the title suggests, the book is concerned with the relationship between inequality and representation: the ways in which various forms of inequality presuppose and build upon specific representations of people and places. These representations are in turn premised on ideas about ‘nature’ and ‘culture’. In the Introduction, West demonstrates how these ideas are neither neutral nor objective, invoking Regis Tove Stella’s analysis of colonial representations of Papua New Guineans as exotic, primitive, unsophisticated and dangerous. (See Dr Michelle Rooney’s excellent two-part review of Imagining the Other for more on Stella’s work). West emphasises that although PNG’s colonial era may have ended in 1975, “[t]he twinned image of savage nature and savage native that derives from this nineteenth-century episteme endures today in the representational practices and rhetorical strategies that surround Papua New Guinea” (p. 5). PNG is certainly not the only place where such practices and strategies endure (Congo comes to mind), but it is difficult to think of other places where they are as intensely applied.

The practical consequence of these practices and strategies, West argues, is the dispossession of Papua New Guineans of access to material resources today, as well as their future access to resources, and of sovereignty. Following indigenous scholars, West takes a broad definition of ‘sovereignty’, referring not only to political control, but also “control over meaning, representations, the future, ideas, and the creation of social worlds and social reproduction” (p. 6). The implication seems to be that control over representations is as consequential for the production and maintenance of inequality as political and material control – making the task of achieving global equality that much more complex.

To flesh out the concepts presented in the Introduction, the book presents four essays (these were originally developed in 2013 as a series of lectures, so to a certain extent they are able to stand alone). Chapters 1, 2, and 3 examine how global forces of tourism, development and environmental conservation, respectively, effect dispossession in PNG. The final chapter explores indigenous Gimi theories of accumulation and dispossession, in order to demonstrate how the discipline of anthropology might benefit from engaging with a wider range of philosophical frames (p. 115).

Of these, readers of this blog are likely to be most interested in Chapter 2, rather ominously titled ‘We Are Here to Build Your Capacity’, in which West argues that development’s drive to ‘capacity build’ necessarily presupposes that non-European people and systems are ‘lacking capacity’, and – crucially – that in PNG this lack of capacity is almost always linked to the notion that Papua New Guineans continue to live in a “prior, primitive state” (p. 65). This argument is supported by several ethnographic examples, including a financial skills workshop delivered by commercial bank representatives; stakeholder consultations about an environmental conservation fund linked to the PNG LNG project; and the discrepancy between per diem rates offered to national and expatriate consultants. West identifies the practice of capacity building as part of development’s general tendency to seek technical solutions, which encourages ignoring the “larger systems of structural oppression and dispossession” that entrench inequality (p. 86). She concludes that, regardless of where capacity building initiatives are targeted (at the individual, institutional, or state levels), “in the end, in terms of policy, practice and ideology, capacity building is about transforming PNG into something else: a vessel for external investment” (p. 83).

Though the chapter is highly critical, it is not wholly pessimistic. Her observations on the nature of interactions between big international NGOs (‘BINGOs’) and national NGOs, and implication that a greater proportion of aid funding would be more effective if granted directly to the national NGOs that often end up as sub-contractors to grant-winning BINGOs, are well taken (see here for the story of a Fijian NGO, which arrives at a similar conclusion). And while she is not the first to observe that development favours the technical at the expense of the structural, West’s razor-sharp descriptions of how development actors (including, notably, elite Papua New Guineans working in development roles) readily deploy capacity building rhetoric when talking with and about local people, provides a valuable, if cringe-inducing, reality check for those working in development.

Overall, Dispossession and the Environment offers a broad and thought-provoking analysis of how PNG is understood and changed (usually not for the better) in a global context. It takes inequality seriously as a phenomenon that is actively created: not only through the accumulation and transfer of resources, but through persistent representations of places and people, which serve to delegitimise local knowledge and sovereignty.

Although, as West suggests, the book may well be of interest to readers with limited prior knowledge of PNG, I do think it offers particular value for those of us engaged professionally or personally with PNG, not least for thinking through the PNG-Australia relationship in a more nuanced way. For example, though it does not mention the offshore processing arrangement between Australia and PNG, I found much in the book that resonated as I read it against the backdrop of the rising tensions on Manus Island in recent times, and the rhetoric that emanates from all sides of the debate about the suitability of PNG as a place to settle refugees.