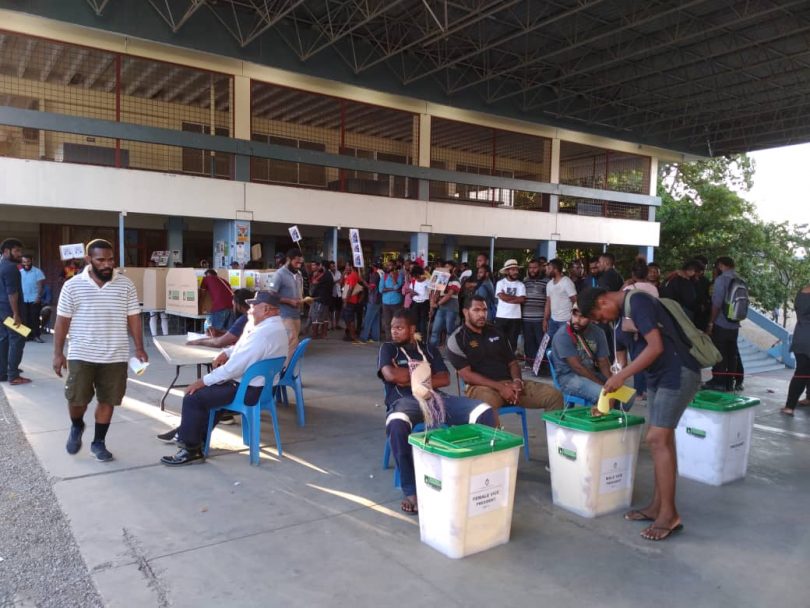 The election for University of Papua New Guinea’s 2021 Student Representative Council (UPNG SRC) was conducted over two days from 21 to 22 October 2020. This was the first election after the SRC was suspended in 2016 following student boycotts against the national government. UPNG SRC elections are important not only for the university and its students but also because UPNG student leaders often go on to careers in national politics.

The PNG Electoral Commission (PNGEC) conducted the polling, counting and declaration. Generally, it was peaceful, and the students followed the PNGEC procedures. The enthusiasm during the campaign period was similar to public rallies during general elections in PNG, with more than 2,000 students present at the Forum Square to listen to candidates speak.

Limited preferential voting was used (as in the national elections). The winners of the vice-presidential races were decided after the first preference counts, as there were only two candidates for each seat.

There were seven candidates for the position of president. The winner of the president’s seat collected 1,567 votes after the fifth elimination and the runner-up had 1,317 votes.

The treasurer and secretary seats were left to the student representatives of each school (faculty) to elect.

Another controversial reform introduced at these elections was to prevent student nominees with a Grade Point Average (GPA) less than 3.0 (out of 5) from contesting.

Following the election, I created a short online survey using Google Forms and sent it out to students via email, and posted the links on the UPNG Facebook group and UPNG Political Science Facebook group, to gauge student views. To prevent non-students from participating in the survey, students were required to sign in using their UPNG email address to participate in the survey. A total of 160 students participated in the survey that lasted for one week. The survey focused mainly on GPA eligibility criteria, and the decision to stop students from nominating candidates based on regional or provincial lines

Of the 160 respondents, 91% said the GPA minimum was a fair criterion, with many agreeing that the core responsibility of the students is to study. One participant said:

The intending candidates who missed out did not meet the GPA requirement. However, I agree with that decision because one needs to perform extremely well academically before he/she can involve with extracurricular activities. Because our sole purpose here in UPNG is to study.

The remaining 9% of the respondents did not agree with the GPA eligibility criteria. There were several reasons, best summed up by this student:

GPA is not a measurement of leadership. There are students who lead their social groups, student societies, or provincial groups effectively, but were left out because of low GPA, whilst students with high GPAs but no leadership qualities were selected.

On the question of banning nominations from provincial and regional groups, 74% thought it was a good idea, and 26% disagreed. Those who supported the ban mainly argued that regionalism is divisive. Those who opposed it said that the ban would remove the incentive for students to provide leadership in these groups. Some students see their regional and provincial groups as training grounds for contesting the SRC elections.

I also looked at how students voted. After all, although candidates could not be nominated by provincial groups, there is nothing to stop students voting along regional lines. I asked the survey respondents to state the main factor determining their vote, for each of their three preferences. Students were allowed to select only one from: the candidate and I belong to the same region or province; the candidate is from my faculty (school); I liked the candidate’s policies; the candidate has a good character; the candidate and I are friends; or other. 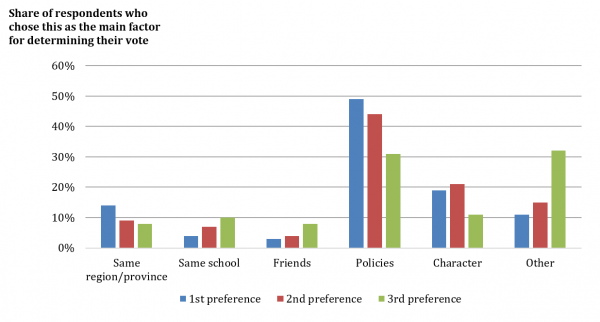 In a country where voters support candidates based on tribal affiliations, it’s interesting to note that it was not a common practice among students. Of course, students might not want to admit they are voting along regional lines. In fact, 54% of the students said that they did vote for a candidate from their region or province, but it was usually because they liked his or her policies. 46% of the students said there was at least one candidate from their region or province, but they did not vote for them.

I also asked a question on whether any of the candidates or their supporters offered ‘gifts’ such as buai, smokes, drinks, or flex cards to influence the votes (i.e. bribes); whether they received these gifts; and whether it influenced their votes. Around 39% of the students said they were offered gifts. About 19% of those who said they were offered such gifts said they took the gifts, but only 5% said it influenced whom they voted for.

Overall, the elections went well and the new criteria that candidates had to meet were popular. That said, there are worrying signs that student politicians (and voters) are learning bad habits, in particular the giving (and receiving) of electoral gifts.

It is good to have an SRC at UPNG once again. The real test will be for the newly elected student leaders to see what they make of their new positions in 2021.