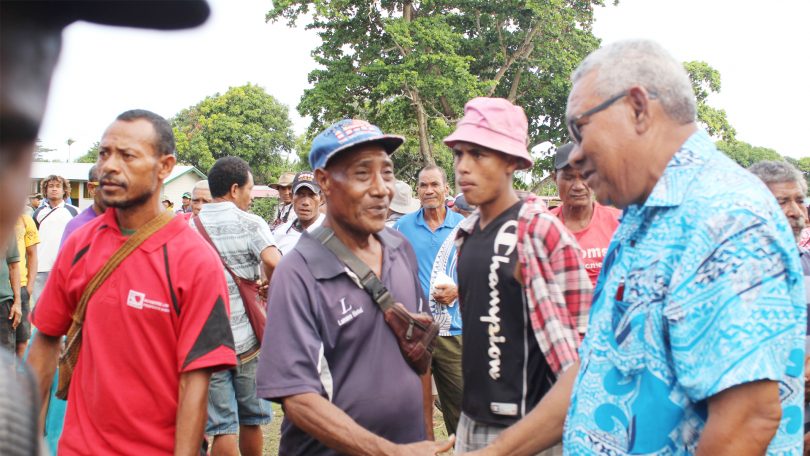 In part 1 of this blog, I described some of the challenges in Papua New Guinea (PNG) today: the way custom can conflict with state law; the difficulties in upholding elements of our con­stitution that relate to equality; and what happens if we allow our institutions to be weak and ineffective. I also described how I think we can fix these problems — by respecting the rule of law, the constitution and democracy. But in this second part, I wish to focus on ethical leadership and give some examples from my career which I think show how leaders can act in ethical ways when confronted with difficult situations.

While I am no expert on ethical leadership, I can share a few personal examples of some of the most difficult decisions I have had to make in an effort to demonstrate ethics and ethical leadership in practical terms.1

In 1969, as a police cadet, I was on point traffic check duty when a driver pulled up. He was a close relative of mine. His driving licence had expired about three months earlier, hence he was an unlicensed driver. Did I let him go and continue driving? No! He was booked and so he organised a licensed driver of his choice to take the vehicle home.

In 1972, when I was a sub-inspector duty officer at Boroko Police Station in Port Moresby, my uncle was brought into the police station by supermarket security assistants and a young police constable, the arresting officer. The offence was accessory after the fact for receiving some groceries from a relative, a shopkeeper. I was the officer in charge of the duty office and I let the young constable complete the laying of the charge with all necessary documentation and place my uncle in the police lock-up. Thereafter, I paid the usual bail to release him from police custody. In fact, this relative was the younger half brother of my father.

In 1981, I was the police divisional commander for the New Guinea Islands Region based at the police headquarters in Rabaul, East New Britain. I was in charge of policing for the five provinces of the Islands Region. In February or March of that year, I defied orders from the national government through the minister of police to remove a road blockage in the manner ordered. The access road between the Panguna copper mine and Arawa town in Bougainville was completely blocked. At that time, most of the people manning the road block were women and children.

The police provincial commander for Bougainville received orders from the government to deploy police mobile squads equipped with tear gas and arms to remove the road blockages. I immediately stopped this and ordered my provincial police commander for Bougainville not to take any orders from any­body except from myself. I was fortunate to serve under a great commissioner of police who lead with charisma and unwavering support for those subordinates who operated within the boundaries of rules, procedures and laws. He supported my decision and actions in managing the crisis on the ground in Bougainville without engaging the mobile squads or using tear gas.

In 1990/1991, while police commissioner, I sat on the police promotions (commissioned officers) selection board. Those being considered included at least eight adequately qualified women police officers who had passed the required written examinations. None of the women were recommended for promotion to commissioned officer rank. I was very dis­appointed and disapproved the board’s recommendation, instructing them to go back to the drawing board. I made it clear that this time we needed to consider the qualified women applicants. Some of the male officers recommended by the board nowhere near matched the qualifications of some of the women in terms of competency, performance, experience and leadership. The board reconvened and this time three women were included in their recommendation. These promotions of women police officers to commissioned officer rank were the first in the history of the Royal Papua New Guinea Constabulary (RPNGC). Leaders have a duty to search out, recognise and give equal opportunities for others to compete on a level playing field based on merit.

In 1992, I attended the annual Conference of Commissioners of Police of Australasia and the South West Pacific in Australia. One week before the conference, the prime minister called me to his office and directed me to make transfers of certain senior police officers to various positions in the police force. I sensed it was out of the ordinary for the prime minister to become personally involved in the administration of the police force at this level. In our conversation, I put it to the prime minister that I would attend to his request, but not in the detail and manner he wanted, as that would cut across the landmark Supreme Court ruling of 1982 on the role of the police commissioner. This ruling was handed down a year after the incident in Bougainville when I had not complied with the ordered manner of removing the road blocks between Panguna and Arawa.

On my return home from the conference in Australia, I received a call informing me that it was in the news media that I had been officially removed as commissioner of police. I did not agree with the manner in which the prime minister wanted to be involved in the administration of the police force, as this would politicise the force. I did not want the police force to be partisan, but to remain independent and able to perform its constitutional duties and functions without fear or favour, and to uphold the constitution, rule of law and order. I was subsequently appointed chairman of the Public Service Commission and later chief ombudsman.

The practice of ethics, to the best of my understanding and as I have tried to illustrate here with these personal stories, is profound. It is a characteristic embedded deep in the heart. Over time, it drives a person to make conscientious decisions and take actions for the sake of the social wellbeing and welfare of all — for now, tomorrow and the future. We are often confronted by extreme pressures that can force people to go off track, but leaders with ethics will stand up and face challenges in order to make the world a better place to live.

I am a strong advocate of ethical leadership — making decisions and taking actions without fear or favour under the auspices of the constitution and the rule of law. Leadership is not complete without the compliment of ethics. Ethics is the driver. Ethics-driven leadership is the way.

This piece, part two of a two-part series, is based on a speech given on 28 May 2018 at the Australia Awards Women’s Leadership Initiative at the Parliament of New South Wales in Sydney, Australia, and was originally published as Department of Pacific Affairs (DPA) in brief 2018/33. See part one here.

Chief Ila Geno is a former Chief Ombudsman of PNG. He has also served as the country’s Chair of the Public Service Commission and Police Commissioner. After retiring from the public service he formed a new political party — the PNG Constitutional Democratic Party — and stood unsuccessfully in the 2017 national elections.