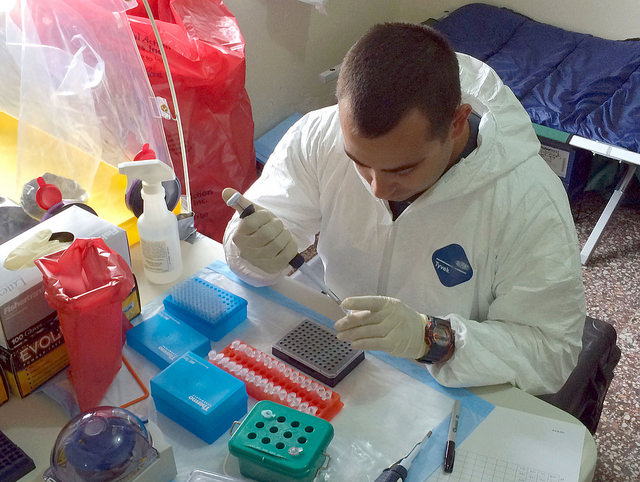 A couple of weeks ago, the Foreign Minister announced the biggest aid initiative in her five years of presiding over the aid program. Endowed with $300 million over five years, the Health Security Initiative for the Indo-Pacific Region dwarves the Minister’s other big initiative, the innovationXchange, which was launched in 2015 with $140 million over four years.

Any enthusiasm that the Coalition government is doing something with the aid program other than cutting it should be tempered by a recognition of the fact this is not additional aid money. Some of it is simply a continuation of existing funding arrangements. To the extent that there is more money for health security, there will be less for the Rohingya crisis, or whatever other good cause you think the aid budget should be supporting. This is because there is no change to the overall aid budget, which, having already been cut in real terms by about a quarter by the Coalition, is slated for another 5% reduction over the next three years.

The announcement is good news for the health sector, but does raise questions about strategic coherence. Health spending has borne the brunt of aid cuts over the last few years. If we are so concerned about disease outbreaks, and if it is so important to build capacity and strengthen health systems, why did we cut aid health spending as much as we did?

While clearly, given the aggregate aid cuts, there had to be sectoral reductions, the aid program has not been cut across the board. From a sectoral perspective, we can divide aid spending into three broad categories: aid to promote good governance and growth; aid to support health and education; and everything else. As the graph below shows, aid for governance and growth has been protected under the Coalition. There is a small reduction after inflation between 2013-14 and 2017-18 of 5%. Everything else has been hit hard. Health and education have been cut by 38%. The residual other category, which covers humanitarian and environmental aid among others, has been cut by 40%. 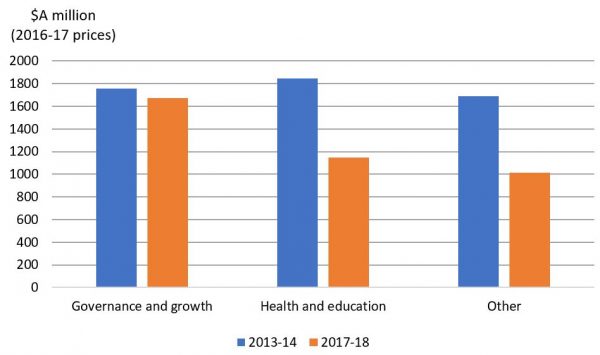 Health and education spending have been reduced by about the same proportion. The big cuts to both came in 2015-16, when aid was slashed by one billion dollars. $610 million of that one billion came from these two sectors, even though together they then only made up 37% of the aid program.

Aid spending for health and education 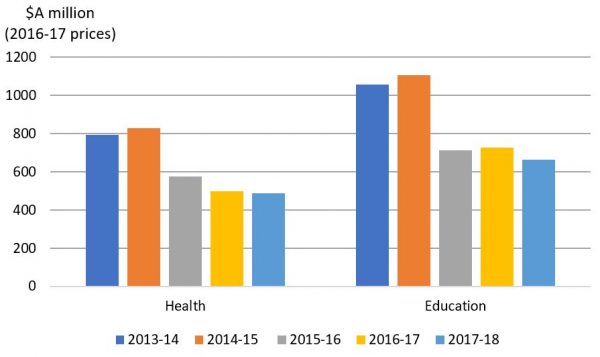 The cuts to health are larger outside of the Pacific. Take Indonesia. Back in 2011-12, we were spending about $20 million a year on health in Indonesia. Today it is just $2.5 million a year. What we were spending on was also quite different. Back in 2011-12, there was funding for health systems strengthening but there was also a focus on maternal and neonatal health and on HIV. Now the focus is on emerging infectious diseases.

In Myanmar, we were spending $15 million in 2012-13 on health, with a focus on maternal and child health and infectious diseases, including TB. Now there is nothing in the bilateral program on health at all, though there are some very small Asian regional disease prevention programs.

What is health security, as against just plain health? The formal write-up makes it sound like the focus of the new initiatives is all infectious diseases. It says that the endeavours “will support efforts to prevent and contain disease outbreaks that have the potential to cause large scale economic impacts on a national, regional or global scale.” But the language in the Minister’s press release and speech suggests that the real target is transboundary threats – diseases that might trouble Australia. Despite this, malaria does seem to be included in the initiative. HIV/AIDS, however, once so important for the Australian aid program, no longer rates a mention. Maternal health and non-communicable diseases by definition do not get a look in.

This is controversial. Do we really not care about maternal mortality in Indonesia, where mothers are 30 times as likely to die in childbirth as in Australia? Are we only prepared to spend funding on health in Asia if it might prevent a disease coming to Australia?

But even if the government were justified in giving priority to health security, as against health in general, it should have done more to protect the health programming budget. For one thing, much of the earlier funding went to health systems strengthening. As the aid budget put it this year: “Strengthened, resilient health systems are a foundation for country and regional health security.” Why then were all those efforts to strengthen health systems terminated?

Moreover, with no aid health staff on the ground, and virtually no health programming, it will be extremely difficult for the new regional health initiative to get bilateral traction. One of the tasks for the new intitiative is to help countries find out where they are falling short in relation to their health regulations and veterinary performance, and then help them find money from a “range of sources” to meet these needs. With the aid program hardly active in the health sector in Asia, how will this be accomplished?

In summary, the new initiative doesn’t score highly on strategic coherence. It is hard to understand why you would cut the annual aid health spend by $260 million a year, and then introduce a new $60 million a year health security regional aid initiative.

This is essentially the critique that Penny Wong, the Shadow Foreign Minister, offered of the initiative just before its announcement, and it is one that will be hard for the Minister and DFAT to counter. But that doesn’t mean that the initiative itself doesn’t make sense. To the contrary, it looks promising from several angles. Perhaps it signals the start of a reorientation of the aid program away from countries and towards themes. Several commentators have argued for this as a way of modernising Australia’s aid. And there is a focus on medical research, something I have argued for. In my next post, I will examine the Health Security Initiative for the Indo-Pacific Region from these two perspectives.

The second post in this two-part series can be found here, and looks at how the funds for the Health Security Initiative for the Indo-Pacific region will be spent and whether the new Centre should have been set up within DFAT, as it has been, or outside the department.