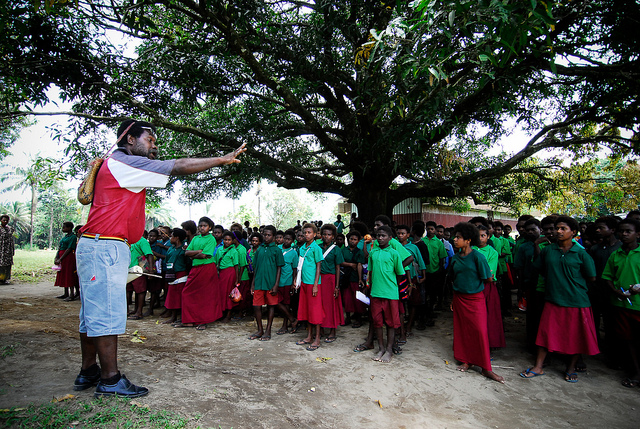 The Millennium Development Goal (MDG) for education was seen by many as a success. It was primarily focused on one key educational outcome: ensuring that all children completed a full course of primary education by 2015. But now the goal posts have shifted. With commitment to the new Sustainable Development Goals (SDGs), the international community has set itself a dual objective of ensuring children finish secondary school and improving student learning outcomes by 2030. SDG 4 (Quality Education) has ten targets, and the first calls for:

All girls and boys complete free, equitable and quality primary and secondary education leading to relevant and effective learning outcomes.

There is no doubt that this goal is ambitious. Are developing countries economically and politically in a position to achieve this dual objective? In this blog we draw on evidence from Papua New Guinea (PNG) to shed light on this question.

Our model incorporates changes brought about by recent policies aimed at increasing enrolments; this includes PNG’s Tuition Fee Free (TFF) policy introduced in 2012 and the expected removal of academic standards for entry into lower and upper secondary school. Our enrolment projections, based on actual data up to 2014 (see workings in this Excel spreadsheet), allow for gradual improvements in grade transition rates and net enrolment consistent with SDG 4’s target (100% grade transition, 90% grade specific net enrolment). We call this the “SDG” scenario.

We then project student enrolment under a “counterfactual” scenario which is aimed at measuring what student numbers would have been without interventions to improve access to schooling. This scenario begins in 2012 because the TFF policy, introduced at that time, was in line with international efforts to increase enrolment numbers. It is based on student numbers growing at the long run average growth rate (3.5%) prior to the introduction of the TFF. The difference between the two projections represents additional student enrolments from policies designed to meet MDG for education (over 2012-2015) and to meet SDG 4 (2016-2030). The following analysis examines changes over the SDG period only. 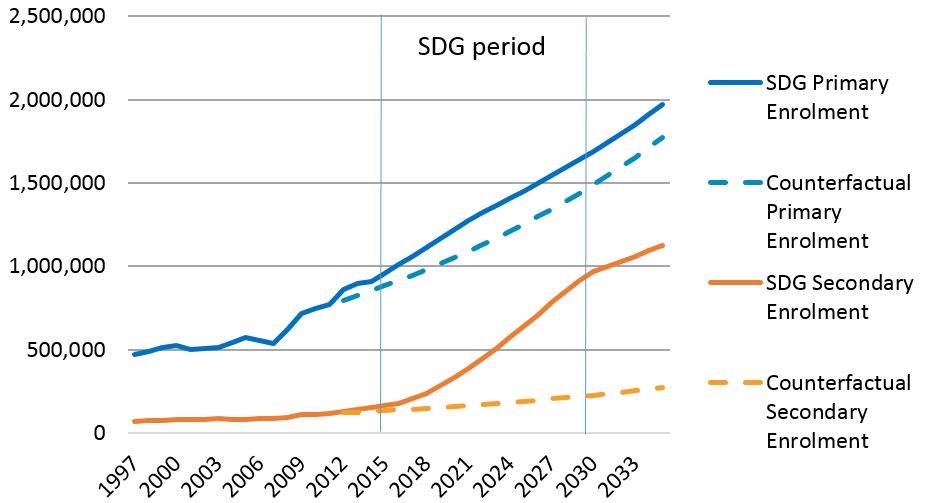 Data and workings for all figures in this blog can be found in this spreadsheet.

How much are these additional enrolments likely to cost?

To answer this question, we hold key education inputs related to education quality constant on a per student basis; in particular, we keep constant over time (and across SDG and Counterfactual scenarios) the ratio of students to: school revenue (after inflation), teachers, classrooms, teacher houses, toilets and water tanks. We also account for the public cost of school subsidy payments, administration and school inspections.

Figure 2 shows that at the beginning of the SDG period the cost of extra enrolments is projected to be, initially, around 30% higher compared to the counterfactual, but by 2030 the additional cost is 85% higher (the average cost increase is 64%). 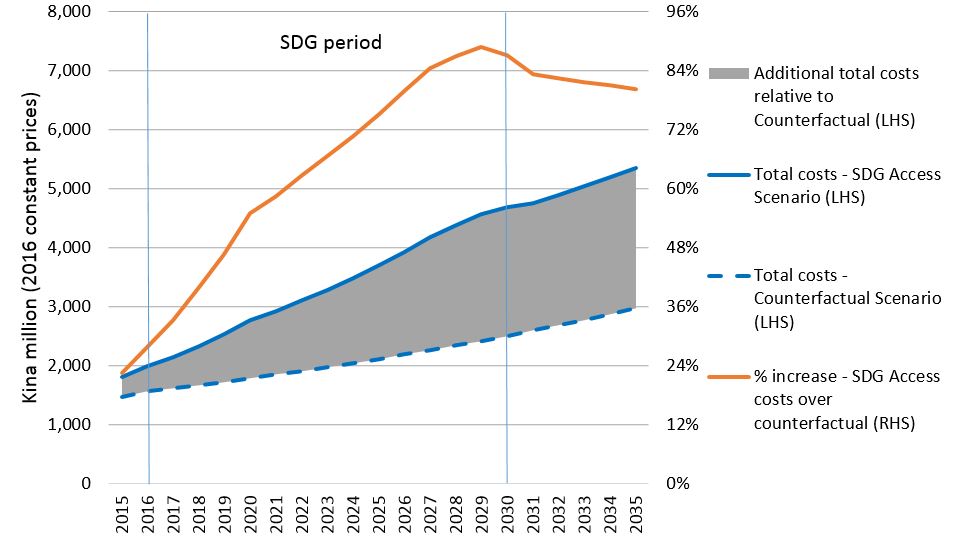 The projected average additional cost of increasing enrolments over the SDG period is 1.3 billion kina (AUD 543 million) per year in constant 2016 prices. (Remember this is compared to costs in the counterfactual scenario). This is equivalent to 10% of PNG’s total national government expenditure in this year’s budget, and is roughly the same size as Australia’s entire annual aid budget for PNG. In turn, PNG is faced with significant economic challenges in trying to meet the enrolment side of SDG 4’s first target, even if there were to be a substantial increase of resources provided by the international community.

To get a sense of the costs involved in improving educational quality we’ve augmented our model to include two components. First, we allow for increased teacher salaries. We now assume salaries (in real terms) grow in line with projected changes in real gross national income per capita, rather than holding them constant over time. Second, we assume that class sizes will be reduced to an average of 30 students per teacher by 2020 (down from 35 and 31 students per teacher in primary and secondary schools, respectively, in 2014). These measures are likely to result in schools attracting better qualified and motivated teachers, and, with less overcrowding, better learning environments.

On average, these measures, together with increased enrolments in the SDG scenario, are estimated to cost an additional 2.14 billion (2016 real) kina (AUD 877 million) a year over the counterfactual scenario (a 102% increase). While there is always uncertainty when modelling such projections, it is clear that, without significantly more resources, PNG will not be able to afford costs associated with SDG 4’s first target. Figure 3 shows a breakdown of the additional costs, which also suggests that policy makers will need to make trade-offs between improving access to schooling (mostly at the secondary level) and providing students with a quality education (the majority of costs at the primary level). This also raises the question about which school level policy makers should focus their efforts on to improve quality education. In PNG these trade-offs are particularly acute because of the very tight fiscal situation facing the country. 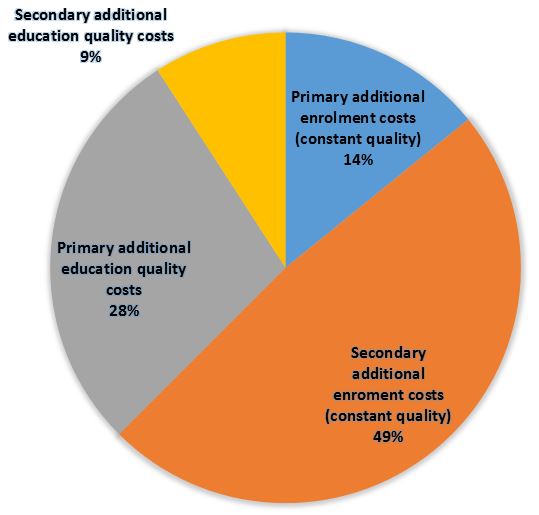 And this is where political challenges come into play. As previously argued, politicians and voters in PNG and elsewhere are incentivised to support improved access rather than improvements to educational quality. The PNG government has vigorously promoted efforts to improve school enrolments; and free education is popular with PNG’s citizens.

In a different context, research has shown that voters in Africa prefer the immediate and measurable benefits of lower costs of schooling, rather than the long-term and uncertain benefits of improved learning outcomes. Voters are also likely to be sceptical about promises made by politicians about quality improvements because educational quality is hard to measure, there are few instruments to track quality improvements, and there are uncertainties about how to best improve learning outcomes.

Globally, the MDGs were considered a success for education, in part because the target (increasing enrolments) was in line with the incentives of politicians and voters. This “political will” is unlikely to help achieve the more ambitious SDG 4 that focuses on both improving quality and access.

Many are pessimistic about the SDGs, and our analysis gives weight to these concerns, particularly as PNG will likely find that just one of the 169 SDG targets is unaffordable.

Given the huge costs involved, and the fact that the SDGs are supported by a range of international development organisations, it is imperative that the international community commits to funding the excess costs associated with the SDGs. Donors can also assist by supporting measures to track and report on education quality – this is particularly the case in PNG where efforts to monitor quality are being threatened. In addition, our analysis suggests that civil society groups, researchers, and governments urgently need to meaningfully debate the trade-offs between improving access and quality in PNG, and in other developing countries facing similar constraints.