Remittances are normally seen as the main benefit of migration that accrues to the sending country, but what about the impact on population? Our previous blog looked at the growth of remittances to Fiji, Samoa, and Tonga, the three “remittance giants” of the Pacific. Despite rapid growth in remittances, the growth of the Fijian, Samoan and Tongan diasporas is not particularly fast. For the last 20 years, these diasporas have grown at around the average of the diaspora for all developing countries (2.6%) in the cases of Fiji (2.8%) and Tonga (2.6%), and below that average for Samoa (1.5%).

However, the distinctive feature of these diasporas is that they are so large relative to their domestic population: 25% in the case of Fiji, 60% for Samoa, and 70% for Tonga. Average growth in these countries’ diasporas therefore converts into high levels of migration and has a profound impact on domestic population growth.

Fiji, Samoa and Tonga all lie well under the trend line for developing countries, as do other countries with relatively high migration: Tuvalu, Marshall Islands and FSM. Other Pacific countries with fewer migration opportunities – Kiribati, Timor-Leste, Nauru, PNG, Solomon Islands, Vanuatu – lie around, or in some cases well above, the trend line.

Population growth and income per capita 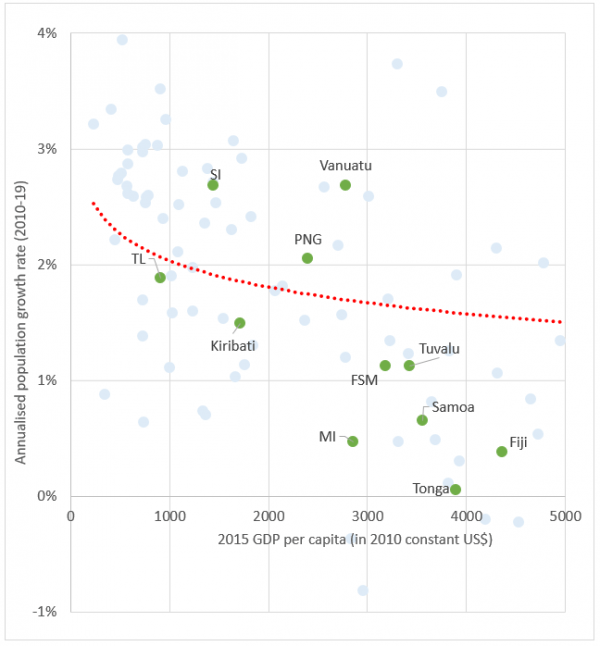 Why are there these two groupings? Fertility rates even in some of the high-migration countries are are still quite high (with the exception of Fiji), and, unlike their population growth, not that different from what you’d expect given their income per capita – as the next graph shows.

Fertility rate and income per capita 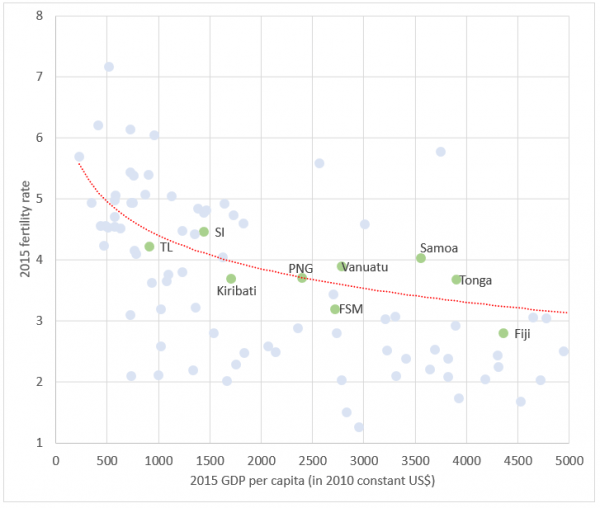 That leaves the simple fact that with more migration there are fewer people left behind in country. The important difference this makes can be seen by constructing no-migration scenarios, in which population is purely a product of fertility and mortality rates. We can also compare pairs of countries with virtually identical populations in 1990: Timor-Leste and Fiji; and Vanuatu and Samoa. (No similarly-sized, low-migration country could be found as a match for Tonga.)

Turning to the third-party comparisons, you can see if you look at the graphs (here) that Timor-Leste looks remarkably like Fiji without migration, and Vanuatu is similar to Samoa without migration.

All Pacific countries struggle with the challenge of job creation. Think how much harder the challenge is for Vanuatu than Samoa, or Timor-Leste than Fiji. It would be naïve to think that, in the constrained contexts of the Pacific, more labour supply and a bigger population would lead to more employment. Rather, in economies with surplus labour, the result would more likely be higher underemployment.

The benefits of migration to the Pacific are not only remittances but also greatly reduced pressure on population and therefore, in a chronically constrained development environment, reduced underemployment. Underemployment is a frequently-remarked on problem in all three countries of Samoa, Tonga and Fiji. These countries would all have much larger populations if there was no migration, and much higher rates of underemployment and therefore poverty.

There is nothing new in this view of migration as a safety valve in the Pacific, which in fact goes back to the 1960s (see Richard Bedford’s excellent survey). Nevertheless, even today, suspicion surrounds migration as a Pacific development strategy. Steve Pollard and David Abbott recently advised Pacific countries to focus on “job creation to replace migration and remittances.” What this analysis suggests is that countries need to focus on both. Even with migration, Pacific economies struggle to create work for those who stay behind. Without migration, it would be even harder.

What this analysis also points to is the urgency of increasing migration opportunities for the low-migration, high-population-growth countries of Kiribati, PNG, Solomon Islands, Timor-Leste and Vanuatu.

Note: Population projections for Fiji, Samoa, and Tonga were calculated using the cohort component method with zero migration. Data source for base populations in 1990, and fertility and mortality rates from 1990-2019: UN World Population Prospects 2019. We use ‘migration’ and ‘out-migration’ interchangeably.