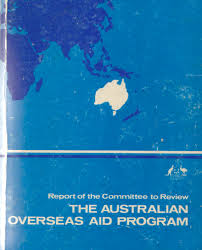 At first glance, Australia’s 2016 aid budget appears to have protected country programs from the impact of what might or might not be the Coalition’s final aid cuts.

A closer look suggests that the very notion of a country program, which emerged from the Jackson Review of Australian aid in 1984, might be withering away. Australia appears set to go back to the pre-Jacksonian era in which ‘forms of aid’ were primary, even if the commodities we wish to export are now less tangible ones.

Australia is not alone in this. A strong emphasis on aid themes over countries is sometimes desirable, as is strong support for the multilateral system. But it is ironic that aid should be becoming so much less bilateral now that it is run by a foreign ministry.

Australia’s aid program, while now thoroughly scaled down, is still a complex organism. In order to understand how it has evolved over recent budgets, up to and including the 2016 budget, it is helpful to decompose it into a manageable number of building blocks. This can be done in various ways, but I find it most convenient to identify 10 such blocks. These are shown in the chart below, along with the dollar amounts allocated to each in the six budgets we have seen over the past five years (there were effectively two budgets in 2013-14 owing to the change of government and consequent large mid-year budget cuts). 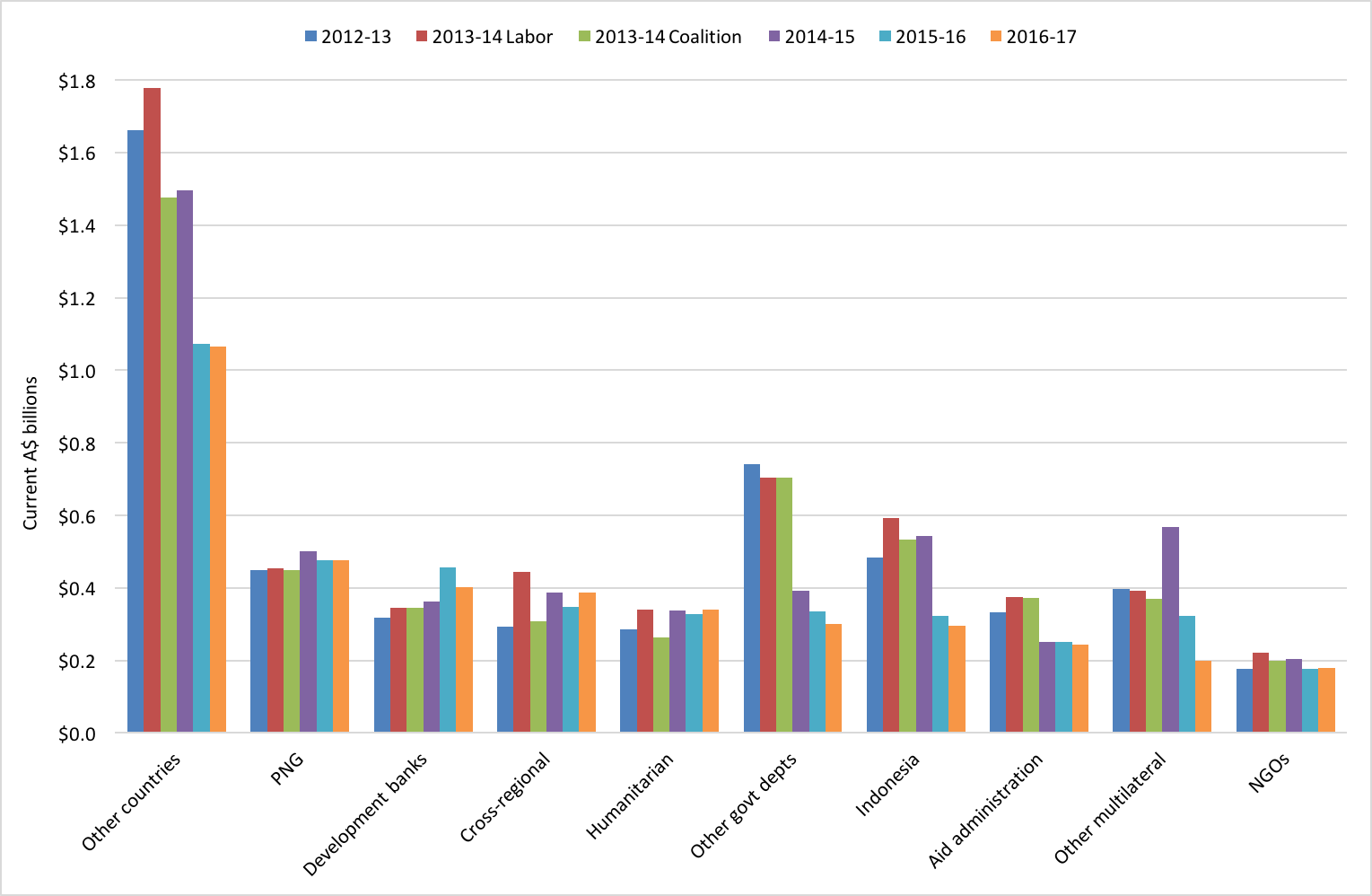 The three country and/or regional program blocks shown above, plus the cross-regional block, constitute what is referred to below as the country programs side of the budget; the other six blocks are referred to as the global programs side.

The net cuts in the 2016 budget all come from the global programs side of the aid budget, which is down 12% or a little over $220 million in nominal terms. The country programs side is down by only $2 million. Just one country, Indonesia, suffered any kind of a reduction: costs associated with an old debt swap were transferred to global programs because the beneficiary organisation is the Global Fund to Fight AIDS, Tuberculosis and Malaria. This accounting change did not reduce the total amount of Australian aid available to Indonesia. Nor, by the same token, did it save the aid budget any money, even if it does remove the expectation that Australia will replace this debt-swap obligation with other bilateral aid to Indonesia once it has been discharged.

No money was taken from country programs, but it does not follow that they have been protected. The government has been at pains to stress that, despite reduced spending on global programs in 2016-17, it is not revisiting commitments to multilateral and regional organisations, but rather ‘re-profiling’ those commitments. That is, Australia is deferring payments into future financial years without reducing the total amounts to be paid by already-agreed end dates. (Our bank managers would charge interest for this. Multilateral organisations are nicer about it.) The deferred costs are effectively borne by other contributing countries. The medium-term costs can only be met by increases in the aid budget, which seem hardly to be expected, or else by transfers between the building blocks—most obviously, from country programs to global programs.

In other words, credit is a fine thing but the bill will soon enough arrive in the mail. When it does, country programs will likely be squeezed further, both in dollar terms and as a share of the aid program. Already the fall in nominal dollar terms for all countries, other than the special case of Papua New Guinea, has totalled more than 40% since 2012-13, and their share of the aid budget has gone from 45% to 36% over the same period.

The longer-term trend in allocations to countries as a share of total aid, from the turn of the century to the 2016-17 budget, is shown in the figure below. Countries’ share of the budget, which was heavily constrained by the existence of the Development Import Finance Facility until the late 1990s, grows fairly steadily to a peak in 2009-10, then shows a decline over the last nine budgets. (The dip in 2006-07 is due to debt relief for Iraq, which was counted as expenditure by other government departments.) The growth of the cross-regional program from 2007-08, the last budget of the Howard government, is striking. These funds are mostly used for thematic priorities. 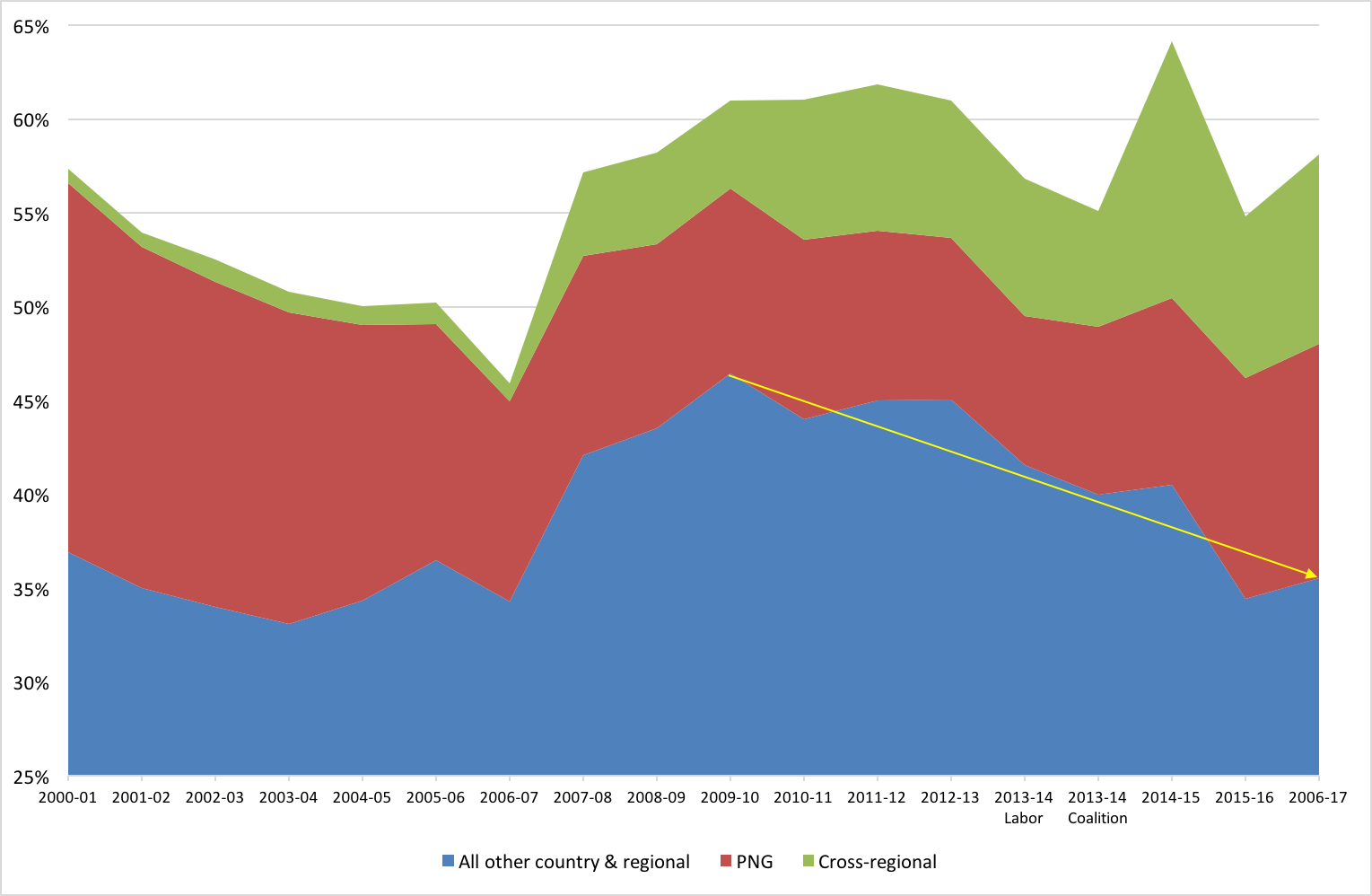 A similar point can be made in terms of aid per capita, and this way of looking at aid also brings to light interesting allocation distortions. If we look at allocations to all the countries with whom Australia asserts bilateral aid relationships in Asia and the Pacific, aid per capita—including for this purpose aid through regional programs—has declined from $2.34 in 2012-13 to $1.86 in 2016-17. It has remained fairly steady in the Pacific at around the $90.00 mark, so the fall has really only affected Asian partnerships. 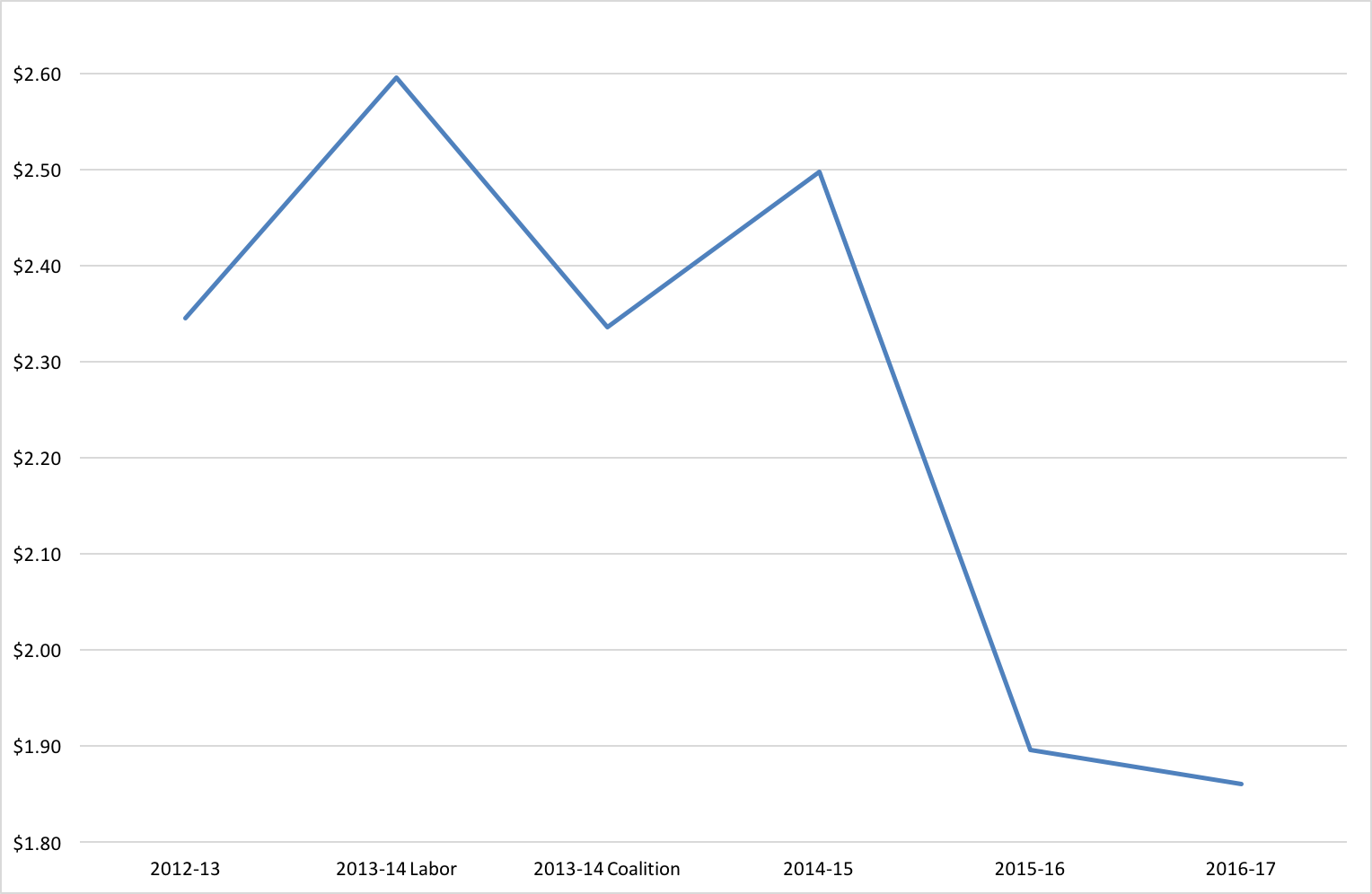 It is striking that the largest per-capita recipient of Australian aid in Asia (if we class Timor-Leste with the Pacific island countries) is now our putative collaborator in refugee resettlement, Cambodia, at $4.08 (bilateral aid only). In the past, Cambodia’s per capita aid receipts were similar to or less than those of Laos and Mongolia. The largest recipient of aid per capita in the Pacific is another co-worker in the same unhappy enterprise, Nauru, at an astonishing $2,000.00—more than ten times larger than any other Pacific island country.

In short, the only ironclad guarantee of protection is a refugee resettlement agreement. It should be noted that the 2016-17 budget incorporated a $10 million increase in the Cambodia program, papered over by the fact that the increase was already built into revised 2015-16 estimates published a few months ago. Cambodia’s bilateral program looks set to grow in up to four steps of $10 million, on top of an untouched base allocation, for no reason other than that Australia struck a poorly conceived resettlement deal with it.

Regional programs in Asia and the Pacific were less fortunate than country programs, all losing 10% in the 2016 budget. In particular, the Pacific regional allocation was cut by $17 million. A $16 million increase in the Fiji country program has built post-Cyclone Winston reconstruction into the bilateral program, but this was effectively paid for by the cut to the regional allocation. It is hard to see how this could merely be a matter of re-profiling contributions to regional programs and organisations, as there are few other donors to pick up the immediate tab in this region.

Both of the above funds are now quite large at around $50 million, so large that it can no longer be claimed that they exist just to seed-fund relevant activities within or across country programs. The jury is probably not ready to consider whether centralised, single-donor funding pots of this nature are effective mechanisms. (‘Grand challenges‘ are easy to launch but eventually they have to produce at least one or two grand results.) However, the existence and growth of these funds does reinforce the impression that Australia is shifting toward forms of aid over country programming.

In sum, the country programs side of the budget, considered in aggregate, has consistently accounted for just under 60% of total aid for the last decade. However, the cross-regional program has ballooned as a share of the budget and huge reductions have been made in country allocations since 2013-14—well above 40% in many cases. As a result, country programming is not what it used to be. This is not entirely to be regretted, particularly in the current budgetary climate. Country programs do not have to be large to be effective in development terms, nor to play an effective role in diplomacy. Australia’s support for global programs generally offers better bang for the buck. But a time will probably come when some government quietly drops the Jacksonian scaffolding entirely—even if it does not exactly say that Australia spends money on what it thinks is good for developing countries.

The second post in this series will examine developments on the the global programs side of the budget.

Robin Davies is the Associate Director of the Development policy Centre.