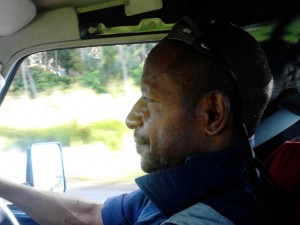 Earlier this year, I was fortunate enough to drive from Lae to Goroka, almost 300 km along PNG’s main road, the Highlands Highway. Or rather I was driven, by David (left). David had a companion, for our safety, and the car owner sent someone along to make sure his car was returned safely. So there were four of us, in a huge four-wheel drive.

Various people had expressed concern that I was driving from Lae to Goroka, including some I regarded as adventurous. So I was a bit nervous. As it turned out, I never felt threatened at all. The entire five-and-a-half hour trip was enjoyable, the mood peaceful, and the views beautiful. I also learnt a lot.

The first 100 km or so is in the plains (below) and the road conditions by and large are pretty good. The road has very little traffic – it’s nearly entirely trucks and minibuses – so high speeds were frequently possible.

For the first 20 miles or so, from Lae to its Nazdab Airport, the road is in an especially good condition. It’s not clear to me why the PNG Government has made this stretch of the road the first stage of its Highlands Highway upgrading, and allocated K150 million for it in this year’s budget (oddly, to the National Roads Authority, which is meant to be responsible for road maintenance). When you travel along the highway, you think there are a lot of other parts which require more urgent treatment.

Once you start to get into the hills, the condition of the road deteriorates pretty quickly. Water is nearly always the culprit. The Highlands is of course a very wet area, and puddles and even streams on the road are common.

The effects are huge potholes, or the complete removal of the sealed surface of the road. At times you are travelling on gravel, and at times it is mud. The other, though far less common, problem is that of land slides, where the land falls away either on top of or under from the road.

Approaches to bridges were particularly suspect. As we were crossing one bridge, Dave told me that recently a bus’s brakes had failed on the approach, and all the passengers had died from the resulting crash.

It was all too much for one truck, which we came across in the middle of the road. The locals had built a little road around it, and were charging for it, but not very much, and they were friendly enough.

There were attempts at renovation, some funded by AusAID, others presumably by the government itself. The work crews (below) always had women holding up the “Stop/Go” signs for traffic at either end. The crews often had police protection, and they sometimes had armed-machine-gun protection. I was told that this was to prevent requests for compensation from locals turning violent.

The issue of compensation is obviously a big one. I was also told that one reason drainage is inadequate is because landowners won’t allow diversions of water, or at least not without compensation. I am impressed by PM O’Neill’s recent denouncement of excessive claims for compensation along the Highway.

Even up in the mountains, most of the road was actually in pretty good condition (below). I wondered if the solution to the problems of the Highway was a rebuild, or better maintenance and drainage. The lack of traffic is no doubt a function of the poor condition of the road, but 4-laning certainly doesn’t seem to be a priority. 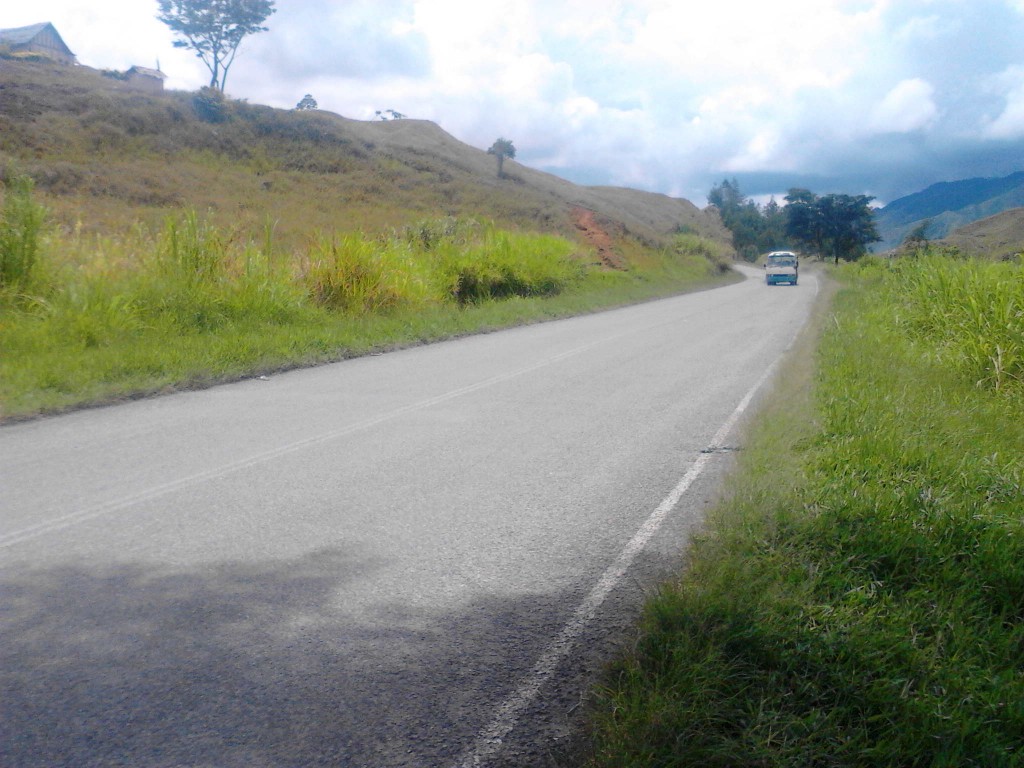 I was interested on my return to see what the official rating of this section of the Highlands Highway was. I was aware that all of PNG’s roads are rated good, fair or poor. Overall, for PNG’s “priority roads” the most important half of its national road network, 49% are rated good, 47% in fair, and 7% in poor condition. I was able to get more detailed ratings on individual roads from the PNG Department of Works, and I worked out that that the 300 kms I’d just travelled were rated much more favourably as overall 91% good, 8% fair, and only 1% poor.

This surprised me, but when I looked more closely, I could understand this verdict. I’ve already mentioned that most of the drive was pretty easy. It was just that when the road was bad, it was very bad. We often had to slow right down, and, given what had happened to that truck, we were lucky that we were able to complete the journey.

One implication is that tracking these aggregates really is not a good indicator of improvement. The stretch I was driving along is divided by the road rating system into some 64 segments of an average length of under 5 kms. The poor stretches are even smaller. There were 8 of them, and their average length was just 300 metres. But if 300 metres of the road is poor, then the entire road is diminished. To take an extreme case, if the road is blocked at one point, the entire road for many kilometres on either side becomes worthless. Even if the road isn’t blocked, if it is known to be dangerous in places, then that local poor condition has a regional impact.

So while the aggregate numbers don’t seem to be very useful, the combination of doing the trip and looking at the data did make me think that it would be very good to make the Department of Works data public, preferably on the web, preferably on a map. It would also be good if the public could report their views  of road conditions (a version of fixmystreet.com?). This might improve responsiveness.

Other forms of monitoring would also be useful. For example, what about simply tracking and making public the time it takes to drive from Lae to Garoka, and other major routes?

It’s not all doom and gloom when it comes to PNG roads. Work done by my colleague Matt Dornan shows that budget and spending on road rehabilitation and maintenance has now started to increase. You can see this in the graph below from our February 2013 budget forum. The shaded areas are the budget (including both donor and government spending), and the line is actual spending (represented by warrants). Both still fall short of the Government’s target (the flat line at the top), but both are on the rise, even after adjusting for inflation, as the graph does. The road crews on the Highway were testimony to increased spending on roads. And most people I asked felt that at least this stretch of road was no longer continually getting worse. 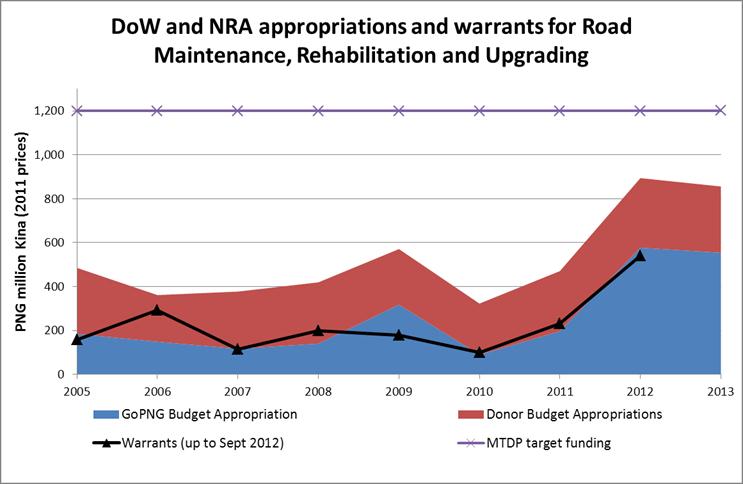 But there is obviously a long way to go. The Highlands Highway wouldn’t be acceptable as a country road in Australia, and it certainly not up to the standard one would expect from PNG’s main arterial.

While the PNG Government is seized of the issue, whether a complete overhaul is the way to go (apparently the current plan, with financing from China), or whether partial rehabilitation along with better maintenance and drainage and quicker filling of potholes is a question that I think needs further public discussion. In the meantime, putting more, and more useful, information in the public domain about road conditions could be a positive step forward.