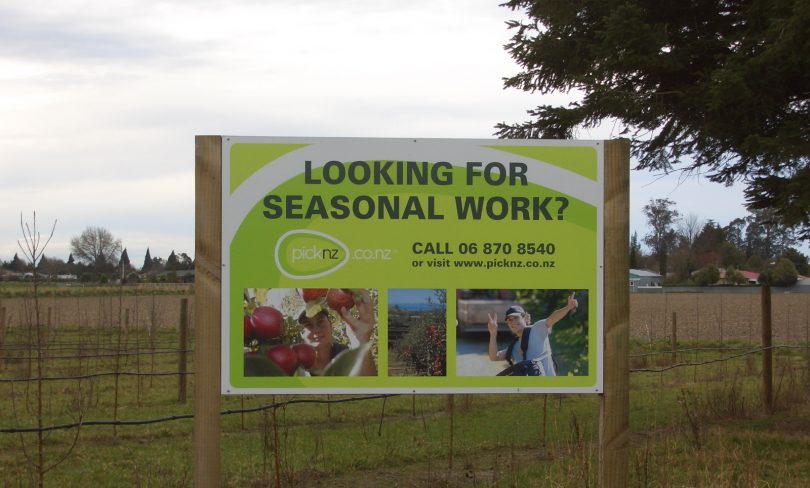 When one-way quarantine-free travel (QFT) was introduced in October 2021 for Samoa, Tonga and Vanuatu – three countries participating in New Zealand’s Recognised Seasonal Employer (RSE) scheme – it was envisaged the arrangement would provide significant relief to horticulture and viticulture growers seeking seasonal labour for the 2022 season. Thanks to a series of external factors, including Tonga’s recent volcanic eruption and tsunami and the arrival of COVID-19 in Tonga and Samoa, QFT arrivals for the peak harvest period are now in question.

Collaborative efforts to implement QFT – by RSE employers, industry groups, commercial airlines, and government officials in New Zealand and participating Pacific countries – ensured the arrangement got off to a good start. Regular flights arrived during spring (September to November), and by early January 2022 over 2,400 RSE workers had entered under QFT with the majority from Vanuatu (50%) and Samoa (39%), and a smaller share from Tonga (11%).

If QFT had continued as planned, an additional 6,600 RSE workers were scheduled to arrive between mid-January and the end of March for the summer harvest period. As with earlier QFT flights, and with RSE recruitment in previous years, Vanuatu (45%) had secured the majority of places, followed by Samoa (37%) and Tonga (17%).

In Tonga’s case, over 1,100 RSE workers were scheduled to arrive in New Zealand by 31 March. However, following the 15 January eruption and tsunami, and the onset of COVID-19 – likely linked to the delivery of humanitarian aid in the aftermath of the disaster – the country is now in lockdown.

COVID-19 has also reached Samoa’s shores. Following a short lockdown and no evidence of community transmission, Samoa has resumed daily life with COVID-19 restrictions in place. But international flights are largely limited to cargo. The Samoan government has approved a single RSE charter flight for mid-February, likely to carry around 300 workers, and a cargo flight carrying passengers both ways. RSE employers had planned to draw heavily on Samoan labour for the forthcoming apple harvest; 2,500 Samoan RSE workers were originally scheduled to arrive before 31 March.

Given the ever-changing environment in which the RSE scheme operates, it is difficult to forecast the numbers that might arrive by 31 March: however, a conservative estimate – at 12 February and noting that flight schedules change at short notice – would suggest around 4,200 of those originally scheduled to arrive might come. There are several assumptions in this estimate: 1) all of the flights from Vanuatu scheduled through until 31 March arrive as planned; 2) Samoa has around 450 workers arriving in February on recently announced flights and, from 1 March, scheduled RSE flights resume as planned; and 3) Tonga recommences RSE flights from March. There may be an additional 1,500 RSE arrivals if Samoa and Tonga can reschedule flights postponed from January and February, and also operate those flights in March. This would, in turn, bring the total up to around 5,700 arrivals. But those are some very big assumptions, and in Tonga’s case, unlikely given the country is now grappling with a growing COVID-19 outbreak.

As the peak harvest period gets underway, growers fear another difficult season with a labour shortage that’s likely to be exacerbated by Omicron. At present, approximately 7,500 RSE workers are in the country – roughly half the current annual RSE cap of 14,400. This year, rather than being one component of the seasonal labour force, they are the core workforce. There are few backpackers left, and finding suitable New Zealanders for seasonal jobs in rural and regional areas is all but impossible with the current record low unemployment rate, despite major campaigns to attract Kiwis into seasonal work.

Of the 7,500 RSE workers onshore, around 3,100 are long-term workers who arrived pre-COVID, prior to March 2020. Long-term RSE workers have now been doing hard, physical jobs on orchards and vineyards for more than two years. Exhaustion, declining motivation and productivity, are taking their toll at a time when RSE workers are likely to come under intense pressure to compensate for the shortage of labour by working long hours to get fruit picked and packed. In the kiwifruit industry alone, 24,000 seasonal workers are needed for the peak harvest from March, with an estimated shortfall of 6,500 workers.

Under the government’s recently announced five-stage phased re-opening of the border, RSE workers from other eligible Pacific countries will be able to re-enter the country from late February. However, unlike QFT where RSE workers commenced work immediately, they will have to self-isolate for 10 days in line with public health requirements. Backpackers – another important component of the seasonal workforce – can also re-enter from mid-March. But there is no guarantee of a sudden influx of backpackers while New Zealand deals with its Omicron outbreak. The expenses associated with 10 days’ self-isolation may be a further deterrent.

Even with the RSE scheme opening up to additional countries, where will workers come from? Fiji has been dealing with a third wave of COVID-19, although this may have peaked in January 2022. The Solomon Islands, Kiribati and PNG are all battling COVID-19 outbreaks, with lockdowns in place in Kiribati and the Solomon Islands. Tuvalu and Nauru are COVID-free, but RSE numbers from both countries have always been small.

When it comes to sourcing RSE labour, it seems likely employers’ demands will fall on Vanuatu. Vanuatu remains free of COVID-19 and could potentially supply more seasonal labour, but not without overcoming several issues: a current shortage of passports due to supply delays from Europe; lack of staff and resources in the Employment Services Unit (ESU) which processes applications for seasonal work in New Zealand and for Australia’s labour mobility schemes; and vaccination requirements which mean all ni-Vanuatu departing for New Zealand must be fully vaccinated – a challenge when less than half of the eligible adult population had received two doses by 30 January 2022. Vanuatu is to begin administering the single-dose Johnson and Johnson vaccine in an effort to reach national vaccination targets more quickly.

On top of this, Vanuatu’s Department of Labour has recently increased the license fee for registered recruitment agents to help cover some of the ESU’s administrative costs. The higher fee for agents will translate into higher recruitment costs for RSE employers who utilise agents to source their RSE workers. Upfront costs for ni-Vanuatu workers to participate in the RSE scheme have also increased, partly due to additional pre-departure COVID-19 testing requirements.

Thanks to a favourable growing season for apples and kiwifruit, high production volumes are forecast for 2022 with good quality fruit. Labour, however, remains the key constraint. While industry CEOs across the country’s major horticultural exports – kiwifruit, wine and apples – welcome the Government’s plans to reopen the border, all say it’s too little, too late.

Despite the government’s initiatives over the past 12 months a significant shortfall of workers for peak harvest seems all but guaranteed. It is difficult to see, at this point, what additional measures can be offered to support industry’s labour needs. The 2022 season may yet be the most challenging growers have faced during the scheme’s 15-year history.