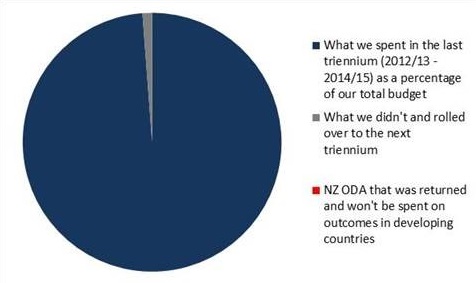 Given that it has been a while since we last blogged on the Devpolicy Blog, the post last month by Terence and Jo provided us with a good opportunity to re-engage. I thought I’d offer some perspective to the issue that Terence and Jo discuss – the “substantial” underspends in the New Zealand Aid Programme.

New Zealand appropriates its official development assistance across a three-year period, or triennium. As the authors rightly note, this multi-year approach helps create some flexibility around how we invest our aid. Investing aid well is an art, not a science. This means that our carefully crafted plans to spend may not always work to the precision that we, our aid partners, and the New Zealand Treasury, hope for. As the authors also recognise, this is why our aid can move with some flexibility across years within a triennium. It is also why, in this particular triennium, we were allowed to roll over resources from the last one instead of returning it to the Treasury. Movements of the magnitudes the authors refer to across years are not a sign that something is wrong. They are a sign that the system is working as it was designed. We do not report rollovers as aid increases. This is why we did not report the “astounding increase” in aid that Terence and Jo describe. The last time we reported an increase in aid was when the aid budget for the 2015/16-2017/18 triennium actually grew by $220 million—an event that we did, in fact, celebrate here in the office as an astoundingly good outcome for developing countries.

Our aid quality assurance policies and processes set a high bar for investing our aid. Meeting that bar requires us to carefully consider, design, and implement our activities. Our public finance regulations set equally high expectations that safeguard taxpayer resources and ensure that public expenditure, including our aid, represents value for money. Small underspends are a sign that we are taking those standards seriously, and that we are using the flexibility that is created by our public finance system to spend our aid well and avoid a mechanistic approach to spending 100 percent each year.

Resources are rolled over (and in theory could be brought forward) through an established process set by the New Zealand Treasury. In the last triennium (2012/13-2014/15), the aid programme spent $20 million less than it had budgeted. During the last budget update in February, we reported that we were likely to underspend by $12 million in 2015/16, the first year of the new triennium. Subject to final checks and audits, the final result is that we underspent by about $8 million last year. The authors describe these as “substantial deviations”. In reality, an underspend of $20 million represents 1.2 percent across the 2012/13-2014/15 triennium. In other words, close to 99 percent of our budget over the last triennium was invested to advance outcomes in developing countries. A shortfall of $8 million in 2015/16 amounts to 1.5 percent of the aid budget. This $8 million will be rolled over for us to use over the next two years under the multi-year appropriation. We are planning to spend that money, and the rest of our budget, over the remainder of the triennium.

Figure 1: Red is dead, thanks to a multi-year aid approach

The authors point out that differences between budgeted and expended aid were less pronounced historically. In reality, most of this could be attributed to end-year “wash-ups”, where underspends were used to make additional contributions to multilateral agencies or one-off payments to sovereign trust funds. The increased differences in recent years between budget and expenditure mean that (a) our aid programme is maturing in its use of the multi-year appropriation system, and (b) we are—by rolling over and not washing-up at the end of the year—making the Aid Programme more effective by leaving room for us to learn, adapt and be patient with good ideas.

The authors also suggest that partner uncertainty is another major concern. We spend a considerable amount of time engaging and working with our partners on our short- and medium-term aid investment plans. And when things don’t go to plan, we signal changes as quickly as we can. By rolling over funding we’re also sending a signal to our partners that we do not want to divert those resources elsewhere just for the sake of achieving a 100% budget expenditure result.

Our partners appreciate our approach. The 2015 Forum Compact peer review of New Zealand [pdf] noted that our approach was a “concrete example of good practice in ensuring predictability of assistance to partner countries”, went on to highlight two specific examples where our approach was specifically mentioned by partner countries as helpful to their planning and budgeting processes, and recommended that we share our approach with other donors as a metric of good practice. The latest OECD peer review of New Zealand also noted continued improvements in our predictability since the previous review in 2010, and a 2012 OECD DAC Effectiveness Report [pdf] showed that New Zealand was the only DAC donor that had fully implemented, or was in the advanced stages of implementing, the DAC’s recommendations on forward aid guidance.

I agree with Terence and Jo that aid spending shouldn’t just be an arcane problem for budget nerds. But I’m not sure I see any of the same problems that the authors highlight. Almost all of our aid is delivered as planned. If our plans don’t work out, or we learn something new that helps us adapt our approach, we don’t have to rush money out the door. We consult on these processes with our partners, who consider their partnerships with us to be reliable and predictable. Everyone involved in the aid programme, at all levels, shares a strong commitment and common purpose to improve the lives of people in developing countries as reliably and effectively as possible.