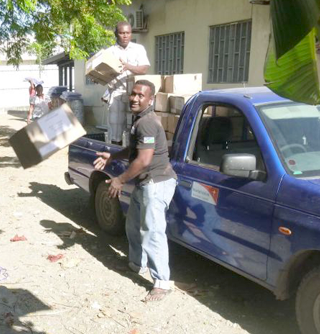 In spite of aftershocks that damaged an important wharf, Solomon Islands has begun the recovery from the tsunami that damaged hundreds of homes and killed as many as 10 in the Santa Cruz islands. Australian foreign minister Bob Carr diverted his Pacific tour to visit with Solomon Islands prime minister Darcy Lilo. Disaster management officials and scientists remain vigilant following reports of steam rising from the ground on one of the islands and continued ‘unusual seismic activity.’

With elections due to take place in April, sacked economics minister, Teva Rohfritsch launched a new political group. The group named, ‘A Tia Porinetia’ incorporates the ‘To Tatou Aia’ group with the leaders of several smaller parties.

French Polynesia President, Oscar Temaru has also signaled his intent to run in the election, despite indicating a boycott earlier. Temaru has also been busy lobbying to have French Polynesia re-inscribed on the UN decolonisation list. Initially reported to be receiving China’s backing, President Temaru later stated he had been misunderstood. He said he would be receiving support from Tuvalu, Nauru and Solomon Islands.

MSG and the independence struggles

Melanesian Spearhead Group (MSG) Director General (DG) Peter Forau says the MSG will step up its support for Kanaky independence in preparation for 2014, when New Caledonia’s congress determines a timeline for a referendum on full independence. MSG countries would also advocate for full independence via their diplomatic missions at the UN. Papua New Guinea Deputy Prime Minister Leo Dion claimed to have boosted commitments to the Kanaks via a pledge for financial assistance to establish a special FLNKS unit at the MSG.

Meanwhile, a West Papua delegate met with DG Forau to share their intention to join the MSG. West Papuans are yet to garner the level of support received by the Kanaks. Some claim that Indonesia’s observer status in the MSG harms West Papuan chances, but Forau suggests their inclusion allows the MSG to engage with them.

Australian Foreign Minister Bob Carr was meant to be visiting Kiribati, Samoa and Vanuatu but amended his plans to include a brief visit to Solomon Islands to offer Australia’s support following the recent tsunami.

He then flew to Kiribati, pledging AUD 15 million to rehabilitate 40 kilometres of main road in South Tarawa. Kiribati President, Anote Tong announced how pleased he was and reiterated that there was no greater security threat to Kiribati than climate change – further demonstrated by the recent purchase by the government of Kiribati of 6000 acres of land in Fiji to grow food.

Senator Carr then headed to Samoa to inspect the cyclone recovery efforts before the final part of his journey to Vanuatu when the re-establishment of ties with the AFP will likely be discussed.

PNG continues to address its political instability issues by increasing a prime minister’s immunity term (to face a vote of no confidence) from 18 to 30 months. While the bill was passed by 90-14 votes, many feel the amendment would be dangerous for parliamentary democracy—accusing the O’Neill-Dion government and the speaker of gagging important debate on the bill before it was passed. The wisdom behind the grace period extension has been rebutted elsewhere, arguing stability does not necessarily equate with economic growth.

More than six weeks after Australian Foreign Minister Bob Carr announced that AUD 375 million would be diverted from the Australian aid program to finance domestic asylum seekers’ costs, AusAID has released (pdf, p. 102 onwards) details of what areas of the aid program would go under the knife. Few countries have been spared. Solomon Islands and Vanuatu bear the bulk of the Pacific cuts (60 per cent of the total between them). PNG on the other hand has a very small increase; perhaps due to the Manus island detention centre? 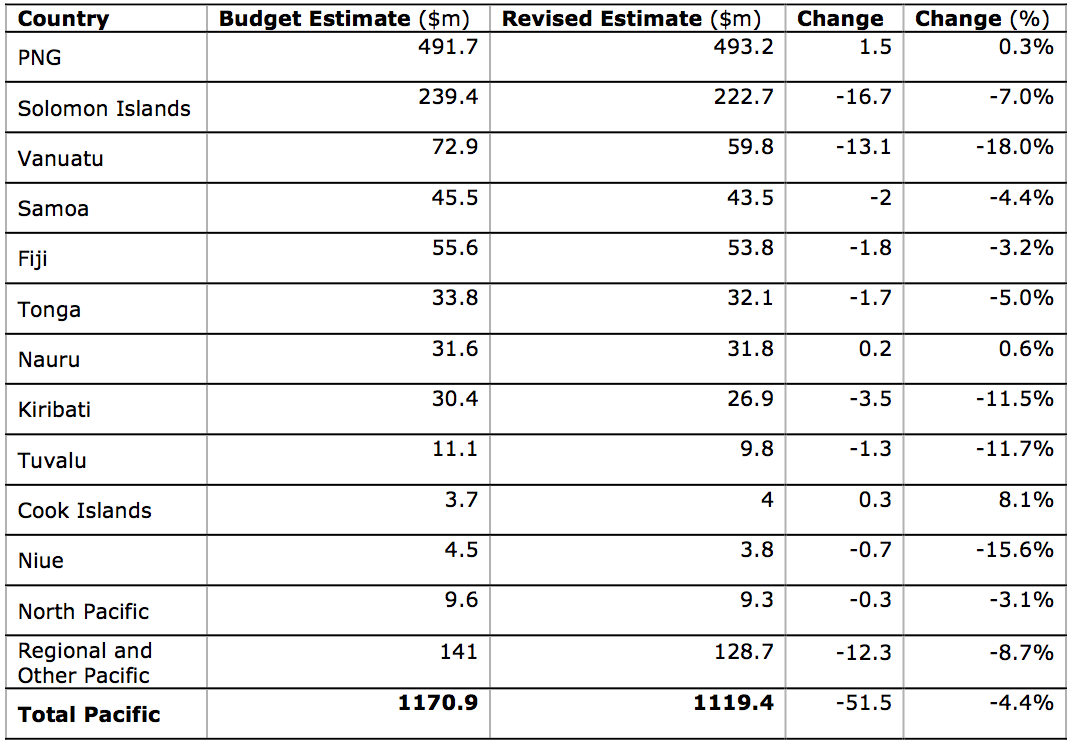 For more analysis on AusAID cuts see this blog.

The PNG budget was debated at the Australian National University-National Research Institute (NRI) PNG Budget Forum. Devpolicy Director Stephen Howes argued [pdf] that the massive surge in project funding for provinces, districts and local-level governments would squeeze frontline service delivery. Finance Minister James Marape announced that the Government would strengthen monitoring and evaluation to ensure effective spending of project funds. Treasurer Don Polye announced that the Sovereign Wealth Fund legislation would be resubmitted to Parliament with amendments. NRI’s Andrew Mako and ANU’s Colin Wiltshire reported back on their just-completed nationwide survey [pdf] of 200 schools and 150 health facilities, with stories of schools closed to tribal fighting but also of retired teachers continuing to teach their community’s children. Full results from that survey will be reported at the next budget forum on August 29 2013.

Also speaking at the Budget Forum was World Bank economist Tim Bulman on the World Bank’s new economics brief for PNG. Bulman argued that, apart from the commencement of the PNG LNG project, the PNG economy was going to ‘slow markedly’, noting that ‘the PNG Treasury forecasts the non-tradable economy to slow to below 4 per cent growth in 2013 and to decline in 2014. This compares with 12.5 per cent average annual growth in non-tradable activity between 2006 and 2012.’ The World Bank’s first Economic Brief for PNG in 2013 also releases further data from the 2009-10 Household Income and Expenditure Survey (HIES), following the disclosure of poverty figures reported earlier. According to the HIES 55 per cent of women don’t walk at night for fear of crime, and 9 per cent reported being beaten in the 30 days prior to the survey, two-third of these by their husband.

Meanwhile, the ANZ CEO, Mike Smith, also speaking [pdf] in Port Moresby, painted a much more optimistic long-term picture of the PNG economy. He predicted that resource-related investments would create 100,000 new jobs, and that agriculture (coffee and oil palm) would be the next big boom in the country.

Agriculture scholarships for Tonga and Fiji

The Tongan government is providing TOP 1 million to finance a new Agricultural Export Marketing Fund to help exporters who buy exportable produce from farmers.  And in Fiji, Commodore Bainimarama’s government is implementing an agriculture scholarships scheme whereby recipients get a one year scholarship to study, and upon graduating become eligible for a FJD 70,000 loan to and FJD 2,000 start up cash to go into agriculture. Fifty students were recently awarded scholarships. Still in Fiji, The Fiji Crop and Livestock Council is a newly formed professional body representing Fijian farmers (outside the sugar industry). It is now the coordinated voice of all farmer associations.

In 2012, Governor Mafi of the National Reserve Bank of Tonga wrote in Devpolicy of Tonga’s economic woes. And these continue in 2013. Governor Mafi recently told the Tonga Chamber of Commerce and Industries that there has been a ‘steep and continuous decline of private cash remittances’. Data show that annual remittances have fallen from TOP 132 million to TOP 110 million between November 2011 and November 2012. Also, public debt has risen by TOP 172 million in four years, resulting in a tight fiscal position and lack of room for government economic stimulus. Later this year, Tonga will also need to start paying off a major loan from China, which is expected to further impact on economic prospects.

PNG decides English will be the only language of instruction.

Cook Islands to ask UN for extension of continental shelf to give it seabed mining rights.

Cook Islands up in arms over Coca-Cola paying a reduced import duty since the 1980s.

Fijians can expect a new constitution by March while sixteen political parties have until Thursday to re-register.