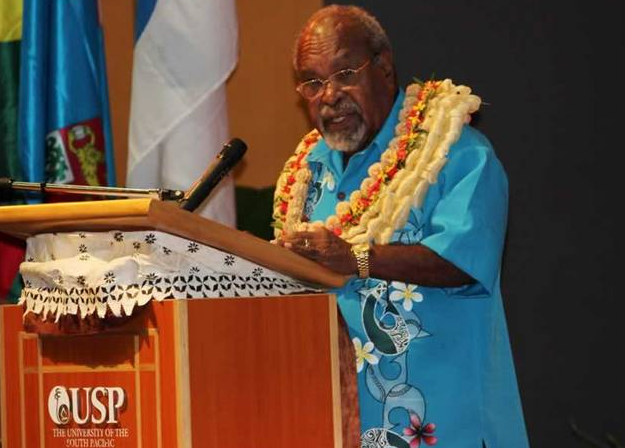 The Melanesian Spearhead Group (MSG) continued to celebrate its silver jubilee, marking its formation in 1988, with a special Melanesia Week. There have been events in Vanuatu and Fiji to note the milestone with more to come in New Caledonia in June when it takes over the Chairmanship of the sub-regional grouping. In a recent Devpolicy interview, MSG Secretary General Peter Forau attributed MSG’s successful rise to the fact that Australia and New Zealand are not members, as they are of the Pacific Islands Forum (PIF). Others hope its “people to people” initiatives will grow in order for the MSG to maintain relevance.

While in Fiji for MSG celebrations, former PNG PM Sir Michael Somare reaffirmed his support for Bainimarama and Kanaky liberation in New Caledonia, suggested re-visiting the nuclear free Pacific idea and left the door open to others in Melanesia to join, perhaps a signal for the West Papuans, who have also recently received support from PNG’s Port Moresby Governor Powes Parkop. West Papua’s push for observer status within the MSG has been a hot topic, particularly with the Pacific-wide tour of Benny Wenda, one of its prominent leaders.

Greens’ president Moana Carcasses has been elected as Vanuatu’s prime minister—replacing Sato Kilman who resigned last week to avoid a vote of no confidence. PM Carcasses is the first naturalised citizen to take the post, after an eventful week of power wrangling that was only settled by interventions from the courts. The new government is already promising to cut down on expenditure—merging two previous portfolios—ni-Vanuatu business and trade into one ministry of tourism and commerce. Also, the former civil aviation ministry has been replaced by youth development, training and sports. And to reflect the growing significance of climate change, a new ministry, of planning and climate change adaptation, has been created.

West Papua’s struggle for independence has been a key issue behind the motion with deputy prime minister and foreign minister Edward Natapei offering hopes of its inclusion in the MSG at the expense of Indonesia, which became an observer in 2011. On the international relations front, there are indications the new government would sever ties with Abkhazia and establish diplomatic relations with Georgia, after much confusion surrounding the relationship under former foreign minister, Alfred Carlot.

Fiji’s Prime Minister Voreqe Bainimarama announced the release of Fiji’s draft constitution (PDF) in an address last week. Citing failures by prospective political parties, he scrapped plans for a constituent assembly review, instead stating that he would go directly to the people. This new process will be rushed—the current deadline allowing until April 12 (only two weeks) for finalisation. Analysis shows that the constitution makes the army responsible not only for Fiji’s defence, but its “well-being.” The constitution also promises full immunity to all in relation to the December 2006 coup and its aftermath. Other aspects of the draft constitution have also received significant criticism.

Fijians have been encouraged to share their concerns/suggestions on the draft either online or via more traditional methods.

Meanwhile, a legal challenge to the Political Parties Decree by the Fiji Labor Party was dismissed, adding to the party’s woes as experts suggest that FLP leader, Mahendra Chaudhry, could be prevented from taking part in the election.

With the NFP, SODELPA and FLP all still waiting for approval from the acting registrar, no political parties have been approved to take part in the election. This did not stop Bainimarama confirming that he would be standing in the 2014 elections, while Attorney General Aiyas Sayed-Khaiyum has not confirmed or denied he will run.

In French Polynesia, independence stalwart Oscar Temaru is preparing to travel to the United Nations to have the territory re-inscribed on the decolonisation list. Vanuatu has announced that it will co-sponsor the resolution. Given the new prime minister’s Tahitian heritage, it seems reasonable to assume that Vanuatu’s support will not waiver in the short term.

In the wake of the aborted leadership challenge within Australia’s labour party, Parliamentary Secretary for Pacific Island Affairs, Richard Marles has resigned. Prime Minister Julia Gillard  appointed Matt Thistlethwaite as his replacement. Marles backed Kevin Rudd for the labor party leadership. Marles spent a lot of time in the region. His resignation comes as Australia’s outgoing high commissioner to PNG recently called for closer relations between the two countries.

North Korea has threatened to attack U.S. military bases in Guam and Japan in retaliation to increased sanctions and recent military training exercises. Pentagon officials have assured Guam, the closest U.S. territory to North Korea, that it and other areas outside the U.S. mainland are covered by the national missile defence system.

Meanwhile, workers at the Regan Missile Test site on Kwajalein Atoll in Marshall Islands face layoffs due to the U.S. government budget cuts.

The United States’ ‘pivot’ into security in the Pacific has attracted attention in Australia, with a leaked draft of the defence white paper highlighting Canberra’s concerns over the potential for increased strategic competition in the Pacific. This point was demonstrated in a recent speech by Fiji High Commissioner to the United Kingdom, Mr Solo Mara.

Also, a recent report suggests that Australia’s defence capabilities will be increasingly stretched by the implications of climate change. 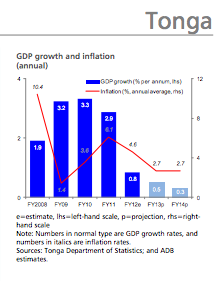 The ADB has projected a further slow down in GDP growth for Tonga (from 0.8% in 2012 to 0.5% in 2013), Samoa (1.2% to 0.9%) and Cook Islands (3.3% to 3.0%). While Cook Islands growth performance is solid, Samoa and Tonga appear to be in protracted periods of slow growth: average GDP growth for Tonga for the last decade is just 1%. There’s marginally good news for Fiji though: its 2003 forecast is up from the ADB’s earlier projection of 1.7% to 2%, which the ADB acknowledge could go higher this year.

The ADB’s Christopher Edmonds and Aaron Batten have summarised the key findings of the latest Pacific Economic Monitor in a blog post for Devpolicy.

PNG to take over Ok Tedi, but how?

The PNG PM has announced that the government will not allow for Ok Tedi’s lease renewal under current ownership arrangements. The mine requires a change to its legislation to allow underground mining if it is to stay in production beyond the next couple of years. The PM indicated that the mine would continue to operate, but under PNG ownership. Ok Tedi is responsible for some 10% of PNG Government revenue. Ok Tedi’s majority share-holder is the Sustainable Development Program, established by agreement between BHP and the Government of PNG at the time of BHP’s departure from the controversial mine some ten years ago. SDP is a company registered in Singapore. How the PNG Government will acquire SDP’s shares in Ok Tedi is not yet clear.

In other PNG mining news, Margaret Callan from the Development Policy Centre has released analysis of financial flows from PNG’s four biggest mining projects: Lihir, Ok Tedi, Porgeri and Oil Search. The four together provide 17% of the government’s revenue, but only 3% of PNG’s formal sector jobs.

Pacific island countries are stepping up efforts to effectively manage their mineral resources. The Deep Sea Minerals project recently hosted a regional workshop aimed at equipping government officials with skills to effectively negotiate mining deals. A conference by UNDP and the World Bank Land and Poverty Conference also reiterated the need for better management of mining deals to ensure Pacific islanders get reasonable benefits. Bougainville will soon be enacting legislation that entitles landowners to substantial mineral rights, while Tonga is also looking at tightening legislation with a plan to introduce a seabed minerals bill later in the year. Meanwhile, a transnational company has approached Fiji with the intention of undertaking experimental seabed mining, in what now appears to be a controversial issue.

Leaders from Samoa, Tonga, Cook Islands, Tuvalu, Kiribati, New Caledonia and New Zealand have spoken at a summit on renewable energy co-hosted in Auckland by New Zealand and the European Union. The summit heard about the need for financing and regulatory reform to facilitate investment in renewable technologies and energy efficiency measures. Helen Clarke, the UNDP administrator, also spoke about the importance of addressing energy poverty in the region. Donors pledged NZ$635 million in grants and concessional loans at the summit for the development of 40 renewable energy projects highlighted as necessary by Pacific Island governments. The conference broke into applause when the UAE announced that its $45m soft loan to PICs for renewable energy investments would be converted into a grant. However, close links with New Zealand industry were also apparent. The summit showcased the technologies and services of 100 renewable energy companies, most of which are New Zealand based.

Nauru’s Supreme Court ordered the cancellation of the Nauru election.

A dengue outbreak in the Solomons has resulted in a State of Emergency being declared.

There has been a further delay in tabling the Solomon Islands Truth and Reconciliation Commission report.

49 prisoners from PNG’s Madang jail are on the run after a breakout, among them a notorious cult leader known as “black Jesus” who is accused of cannibalism.

Kiribati president Anote Tong says tertiary students should take out a loan to fund their studies.