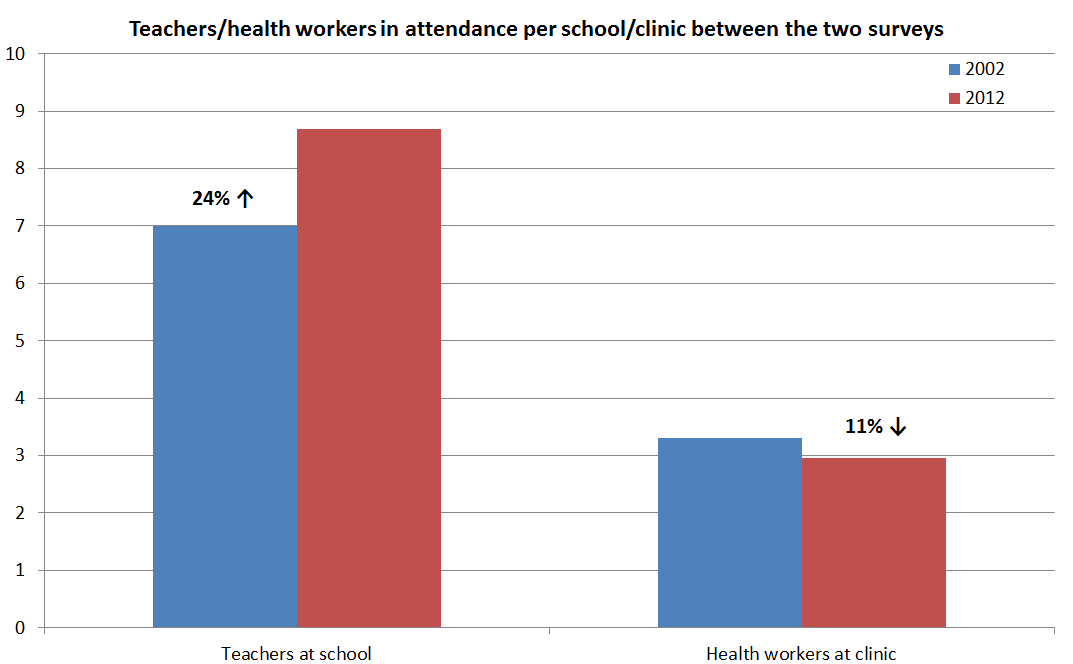 Our 2012 survey included the same 166 schools and 63 clinics surveyed ten years ago by the NRI, in 2002. (In total we visited 214 schools and 141 health facilities.) By comparing the results from 2012 with those from 2002, we are able to address, for the first time, the pressing question of whether PNG has so far been able to translate its booming mineral wealth into services for ordinary people. 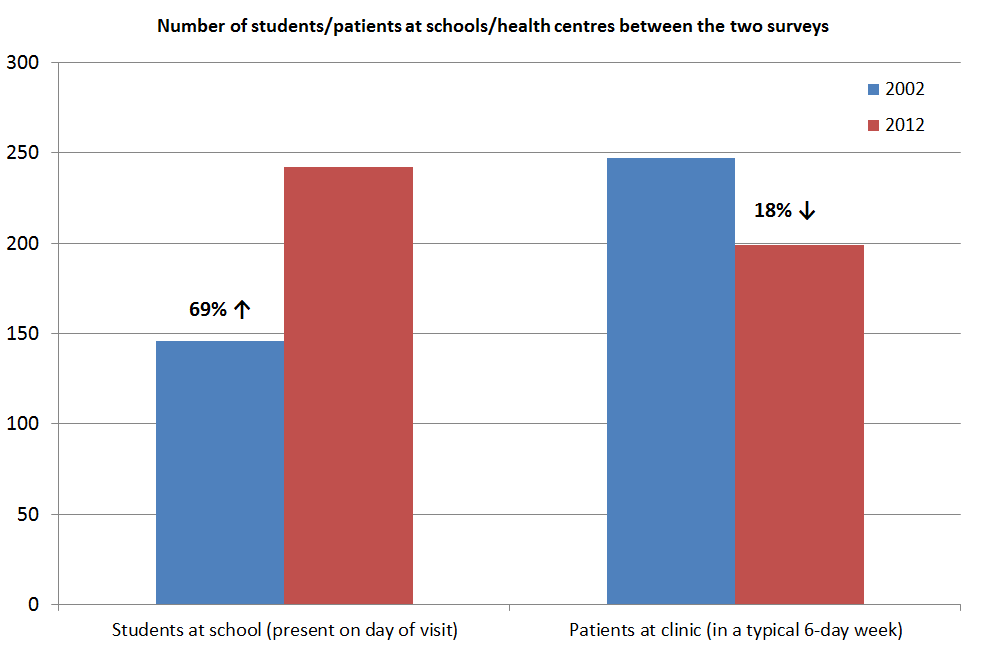 There are other indicators that the education sector has done much better than health. The number of teachers and classrooms increased over the last decade, the quality of classrooms also improved, and teachers reported greater adequacy of school supplies, such as textbooks.

The performance of health clinics unfortunately went in the opposite direction over the last decade. There was a decline in the availability of some key drugs and medical supplies. While many health staff are clearly very dedicated (three-quarters contribute from their own salary to running costs), the number of health staff working at clinics fell by around 10%, as the graph below shows.

This is not to say that there are not problems in education. To the contrary, the results show schools face some of the same problems which hinder health clinics. For example, about 40% of staff homes for both teachers and health workers and 25% of class rooms and clinics require rebuilding due to a lack of maintenance.

Nevertheless, these clear differences in the direction of performance between the education and health sector over the last decade demand an explanation.

The policy of abolishing school fees has boosted school attendance, but the number of clinics charging fees has also fallen. The new policy of free health care will not be enough to turn around performance, and indeed may exacerbate existing problems as health centres are starved of cash.

The analysis undertaken so far suggests four reasons for these differences. First, more teachers have been hired than health workers. The inability to replenish the health labour force is a critical problem which will require both funding and training to address.

Second, primary schools have benefited from funding direct to schools from the national government (85% reported receiving both their 2012 subsidies). By contrast, health centres are reliant on the health function grants, and in most provinces these funds are not reaching the health centres (whether directly or in-kind). As a result, they are unable to carry out basic functions such as patrols and drug collection or distribution.

Third, primary schools seem to be better connected to their communities. Nearly all have boards of management with community representation and a parent and citizens (P&C) committee. Health clinics don’t have a board of management and only 60% have a village health committee. School P&C committees are also more active than village health committees, meeting almost twice as often on average.

Fourth and finally, primary schools are more likely to receive a visit from their supervisor than rural health clinics are.

These initial results illustrate the sort of analysis now possible with this unique longitudinal data set. Other results presented and discussed last week show that there is enormous variation in performance across provinces. A lot can be learnt from looking at the better-performing provinces. There is also some evidence that church-run health facilities perform better than government ones. We will be releasing further results and analysis in the coming months. We will be also undertaking much more detailed analysis at the facility level to better understand the determinants of performance over the last decade. We look forward to sharing more detailed findings from the survey as they become available.

While data and analysis are essential, so too are engagement and dialogue. The point of this exercise is not to lay blame or to point fingers. Over the last month, we have gone back to seven of the eight provinces from which we collected our data last year, presented our preliminary results, and sought their feedback. All have welcomed the availability of this new data and expressed their desire to use it to improve service delivery.

And last week we had the Acting Secretaries of both the Education and Health Departments there for the entire forum. Both talked about the value of this data, and the way they want to respond to its findings.

Was the last decade a lost one for PNG? As often happens, the answer is more complex than the question suggests. The last ten years have not been good ones for the health sector, and it is hard to see evidence of the additional money allocated to the sector on the ground. But for education, while many challenges remain, there are also important indicators of significant progress.

This variable performance has much to teach us. Free education or free health is not enough to guarantee expanded and improved provision of service. Getting frontline staff in place, getting funds and/or resources to the facility level, and strengthening community engagement and supervisory arrangements all seem to be important for improving service delivery in PNG.