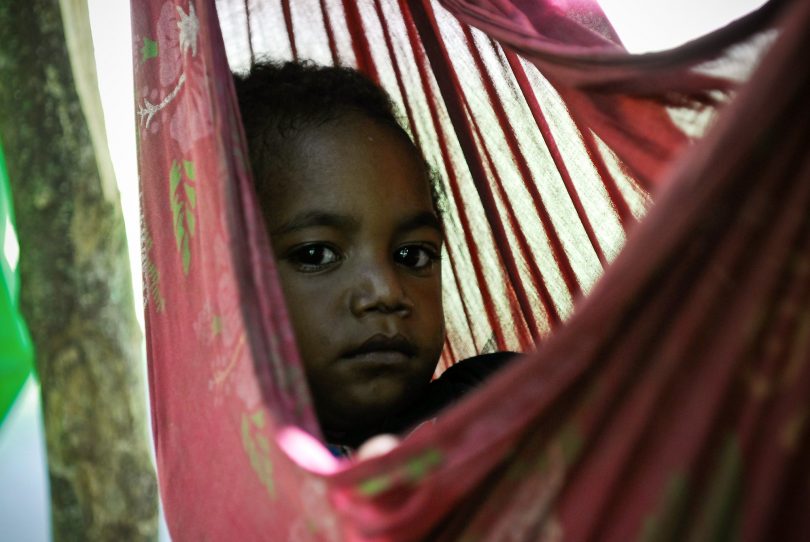 Papua New Guinea (PNG)’s low COVID-19 vaccination rate is well known. This blog provides some context for that, and points to the wider problem of falling national immunisation rates.

The World Bank reports data immunisation coverage for nearly all countries in relation to three vaccines: the measles vaccine; the combined vaccine for diphtheria, whooping cough and tetanus (DPT); and the hepatitis B vaccine. On all three, the most recent data (for 2019) show that PNG has the lowest vaccination rates in the world for infants: 37% for measles, 35% for DPT and 35% for hepatitis B.

The graph below shows the average ranking across the three vaccines for the ten countries which have the lowest rankings on average for 2019. It is generally a group of countries facing crises of terrorism, refugees and/or large-scale conflict. Plus PNG. 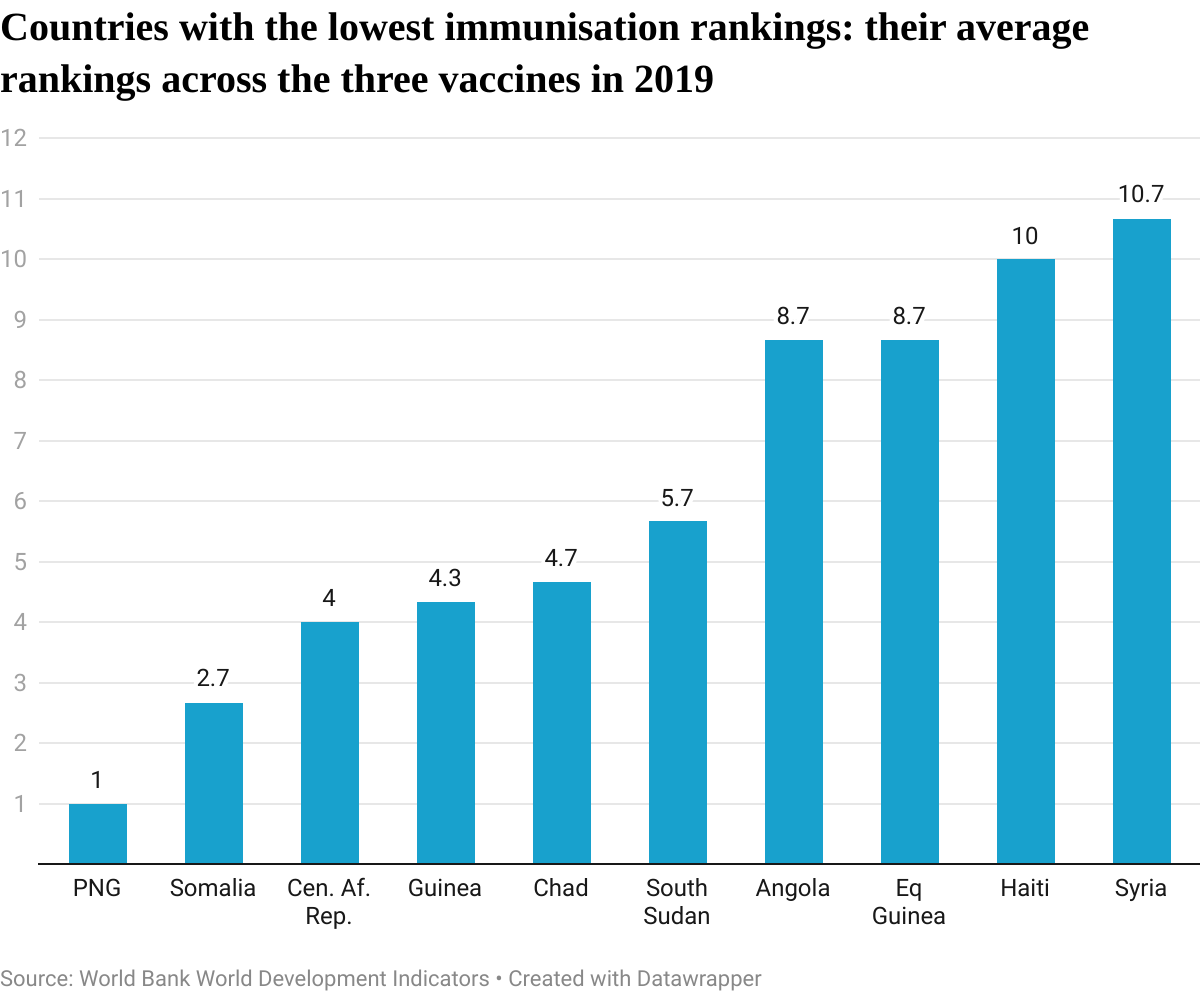 How to explain this shocking fact?

Explanations based on PNG’s characteristics struggle in the face of comparisons across countries. We might say PNG is a fragile and conflict-affected state. The average for fragile and conflict-affected states is 67% for both DPT and measles, and 68% for hepatitis B. We might say that service delivery in Melanesian countries is generally poor. Immunisation rates in Vanuatu and Solomon Islands are 80% or higher for measles, and 90% or higher for DPT and hepatitis B.

A standard explanation is that PNG is geographically challenging, populated by hard-to-reach, remote communities. But that doesn’t explain why PNG’s vaccination rates have plummeted over the last 15 years. 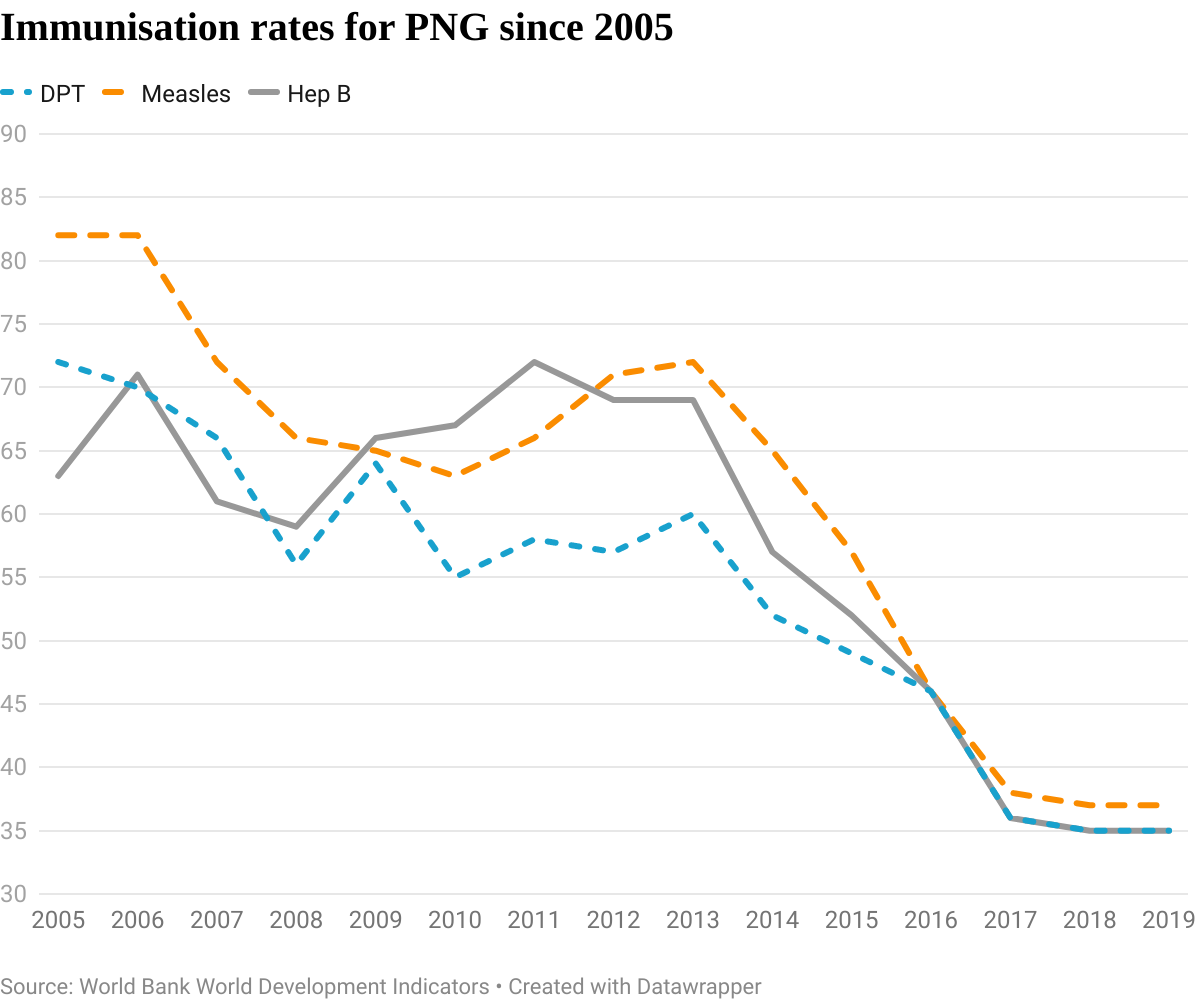 Perhaps the data is wrong. 2019 was in fact meant to be PNG’s ‘year of immunisation’, the year in which, responding to an outbreak of polio, a massive immunisation drive was conducted, with significant donor support. According to UNICEF, more than a million children were vaccinated against measles (as well as rubella and polio) in a nationwide campaign that year. But the World Bank data (which comes from UNICEF and the WHO) tells a different story. So does PNG’s own national data (presumably the original source), which puts measles vaccination rates in 2019 at 34%, and the combined DPT/hepatitis B vaccine at 42%. These numbers show no improvement at all over previous years, simply a halt in the deterioration.

Perhaps then there are problems with the quality of the PNG immunisation data (and more generally PNG’s over-elaborate health data collection system). The comments in the UNICEF/WHO country report hint at this. But, even if there are question marks around PNG’s precise immunisation rate, the country’s own national program and survey data both confirm the collapse in PNG’s immunisation rates over the last 15 years or so.

Immunisation rates improved over the 1990s. The real collapse in rates came between 2013 and 2017.

The emphasis then was on providing funds for MPs to spend on local projects. None of this went on health service delivery. There was a famous drug corruption scandal. The resource boom was over, and revenue was falling. Health budgets were cut (after inflation, by 9% between 2013 and 2017). Then Prime Minister Peter O’Neill introduced a ‘free health care’ policy at the start of 2014. Health facilities were discouraged from charging user fees, their most reliable source of revenue. Analysts warned at the time that this would weaken the health system.

Meanwhile, Australia was reorienting its aid to PNG over this period away from service delivery!

Whatever the questions around the accuracy of PNG’s immunisation data, there is plenty of evidence that immunisation rates had deteriorated to crisis levels prior to COVID-19. Controversies over the COVID-19 vaccine will only make the general immunisation task that much harder. We can debate whether PNG is a failed state. But this is a clear case where the state has failed its people.

Data from World Bank World Development Indicators. Measles and DPT coverages are reported in relation to two year olds; hepatitis B in relation to one year olds. The DPT and hepatitis B vaccines are now combined in PNG so the two series have converged. Health budget data from WHO.