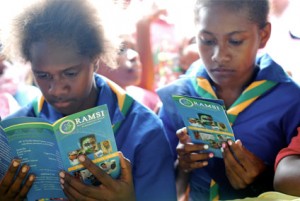 Evaluation of the RAMSI intervention in Solomon Islands has begun, with more to come. Blog posts by Nicholas Coppell and Terry Brown have marked the opposite ends of the spectrum, while Benjamin Afuga and Ashley Wickham paint more mixed pictures.

The only thing the first two assessors agree about is that getting the guns off the streets of Honiara and the rural roads of Malaita and Guadalcanal in 2003 was essential, and was well done. It was done quickly, within a few weeks of RAMSI’s arrival, and it worked. That was an unambiguous act of physical intervention, reinforcing the intentions of the Townsville Peace Agreement, applauded by all but a few hundred gun-drunk characters and their political masters and hangers-on. It triggered a great sense of relief in the country at large, and much speculation about what else could and should be done to restore normality, get back on a sensible track and safeguard against relapse.

In search of a balanced view myself, I’ve been looking back at how things were just before and just after RAMSI arrived to see how far our hopes and fears have been realised.

In April 2001, I discussed the situation with AusAID. A note of what I said then is available here [pdf].

Key points were that Solomon Islands has a long and close association with Australia and is not about to disappear; as a result Australia collectively knows a lot about SI but doesn’t use this knowledge to best effect; and the aid program seems to be formed more by institutional procedures in Canberra than by any joint Oz-SI intellectual processes. On Australia’s involvement immediately before RAMSI was created, I noted:

“The tragedy unfolding in SI since late 1998 has only highlighted these characteristics. Australia was shocked by the eruption of violence on Guadalcanal, as were many people in Solomon Islands. The build-up of pressure—traditional inter-island friction, aggravated into bloody vengeance by uncontrolled post-war migration, land dealings, increasing unemployment and a history of unattended grievances—was missed by most observers.
a
As the violence escalated and the deep fault-lines in SI’s security services were exposed, the SI Government asked Australia for help with restoring law and order. The negative response was a blow to SIG and many ordinary people, including most resident Australians. Official statements explained that Australia was afraid of being sucked into open-ended internal strife with no clear prospect of success in ending it and thus no sure way out. Once it was clear that there would be no preventive intervention from outside the Ulufa’alu government’s fate was sealed.
a
The 5 June 2000 armed coup by the MEF, PFF and their political allies precipitated the evacuation of most Australian personnel from Honiara. Key diplomatic and aid management people remained to witness the small-scale but intensely traumatic civil war, political deal-making and gangster-like wave of urban and rural crime that followed. The eventual cease-fire and the Townsville Peace Agreement—both achieved with strong logistical and psychological support from Australia—opened the way for a small, unarmed Australian peace-monitoring team to be provided as support to the peace process.”

Just over two years later, when RAMSI had been two months on the ground and the benefit to public safety was being felt, I made a number of comments in an outline development strategy prepared in Canberra for reconstruction of the SI economy, including:

“The policy prescription running through the outline is philosophically ‘Washington consensus’. This has not worked anywhere without substantial adjustment to local circumstances, history, geography, social and business culture. The outline seems to assume away all these things as if SI was a blank sheet of paper—apart from some messy recent scribbles that will be dealt with by the RAMSI eraser… the outline reads as if SI were an aberrant district of NSW that needed to be shaken up and brought into line. The Melanesian countries differ in important ways from the ‘successful, resource rich developing and middle-income countries’ you cite as comparators—which differ among themselves in equally important ways…
a
In the same vein, it is simply not true that ‘in successful economies, governments have not initiated growth’. Every successful economy I can think of owes much of its success to intelligent state intervention (including forms of state ownership)… What SI has suffered from in the last fifteen years is plundering of the economy by corrupt public officials in collusion with unscrupulous enterprises—not a necessary corollary of a strong state role in laying the foundations for economic growth.”

In the event, Canberra didn’t persist in prescribing development strategy in that way. Instead, RAMSI successfully restored and strengthened the badly damaged systems and controls of the Ministry of Finance, and in the process created an Economic Reform Unit in the Ministry as the main instrument through which to influence economic policy. In a curious offshoot to this very effective engagement, the ministry was re-badged ‘Ministry of Finance and Treasury’—a meaningless change in SI, as the treasury function was already an integral part of the finance ministry. My inquiries indicated that the change was made to protect the CVs of staff seconded from the Treasury in Canberra, who were unhappy with a posting to a mere Ministry of Finance, a relatively low-prestige location in Canberra.

In June 2004, almost a year after RAMSI arrived, Tarcisius Kabutaulaka of the East-West Center convened a three-day workshop in Honiara to discuss what lay ‘beyond intervention’. The RAMSI Special Coordinator addressed the workshop and mine (available here [pdf]) was one of many discussion papers. At that time I was most interested in what recent events told us about:

All of these issues were making for unease about the future among Solomon Islands people, and uncertainty among domestic and foreign investors in sectors important for long-term growth.

To those concerns I would add now:

At this stage RAMSI may be seen to have materially helped to keep the leaking ship of state afloat, but not to have had the desired impact on the structural integrity of the hull, the quality of the seamanship and navigation of the crew, or the well-being of the passengers.