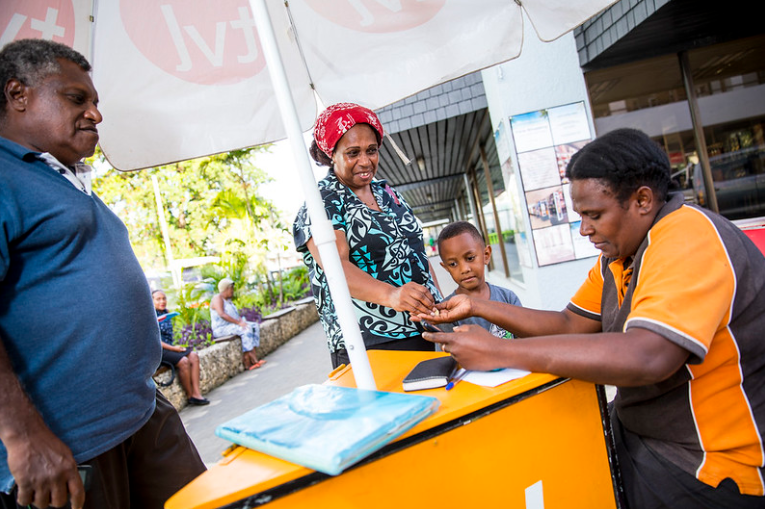 For many centuries humans have been travelling the globe and with these travels has come the need to move money safely, cheaply and efficiently. Today, there are many people who move abroad in search of better work opportunities and the means to support family members back home. These migrants require a reliable, affordable and convenient channel to send the money they earn in the country of employment home to their families. In financial services industry parlance, this is a ‘remittance’.

According to the World Bank, the total size of the international remittance market is around US$600 billion and is increasingly becoming an important use case for cross-border payments. Not only due to the sheer size of the business case remittances represent, but also because of the significant impact they can have on the receiving countries. The majority of the 250 million migrants who send money are relatively poor and so are their families.

The New Zealand government’s Recognised Seasonal Employer (RSE) scheme and the Australian government’s Seasonal Worker Programme (SWP) are two labour mobility programs that allow Pacific islanders to work in Australia and New Zealand. The SWP in 2018–19 alone provided seasonal work opportunities for approximately 12,000 workers from the Pacific region, mainly Vanuatu, Tonga and Timor-Leste. The Pacific average for total earnings (net of taxes) in a six-month period of seasonal work in Australia is A$18,252, of which a significant portion is remitted back home.

At present, the Pacific remittance corridors are among the most expensive in the world. The average cost of remitting US$200 to the Pacific small island developing states from 2011 to 2017 was 11.6% of the transaction value. This is well above the global average of 8.2%. In the remittance journey, typically at least one leg involves physical cash. This can be either in the “first mile”, when the seasonal worker hands over cash to a bank or a Money Transfer Operator (MTO), or the “last mile”, when the cash is handed over to the worker’s family in their home country. Usually, given the relative robustness and availability of digital banking channels, the first mile in either Australia or New Zealand is digital. The last mile at the recipient end in the Pacific, however, is mostly cash transactions. These vast financial networks are very expensive to maintain, and the costs are usually passed on to the customer. The costs are typically borne by the sender as the charges are loaded upfront. For the recipient, all that matters is the net amount of cash received, regardless of the charges.

There is work being done in Vanuatu to drive down remittance costs. And developments in financial technology (fintech) – online platforms and mobile money services – are driving the change.

The National Bank of Vanuatu (NBV) has been leading the effort to make remittances cheaper and less cumbersome for ni-Vanuatu. In recent years, NBV has embarked on a digital transformation journey. Its online and mobile banking platforms now include features designed specifically for seasonal workers, such as a forex calculator and preferential forex rates that make it easier to calculate remittance costs when converting to Vatu. Additionally, NBV has incorporated functionalities that assist seasonal workers to access microloans to cover their domestic travel, and visa and medical fees – significant costs that seasonal workers often need to cover prior to their departure to Australia or New Zealand.

Telecom Vanuatu Ltd (TVL) recently launched M-Vatu, a mobile money wallet that offers cheaper domestic remittances. Importantly, M-Vatu will soon open up to receive international remittances using the connections that TVL’s sister company, Vodafone Fiji, already has with a wide variety of online MTOs, such as WorldRemit, Ria and TransferTo. Pooling of volumes from different Pacific countries creates the necessary economies of scale in a region that is characterised by small and fragmented markets, making it more attractive for non-traditional MTOs, such as WorldRemit, to enter and eventually reduce the cost of sending money home for ni-Vanuatu.

In Vanuatu, the Pacific Financial Inclusion Program (PFIP)  has provided support to NBV and TVL for their digital transformation and mobile money projects, respectively. PFIP is jointly administered by the United Nations Capital Development Fund and the United Nations Development Programme, and receives funding from the Governments of Australia, New Zealand and the European Union. 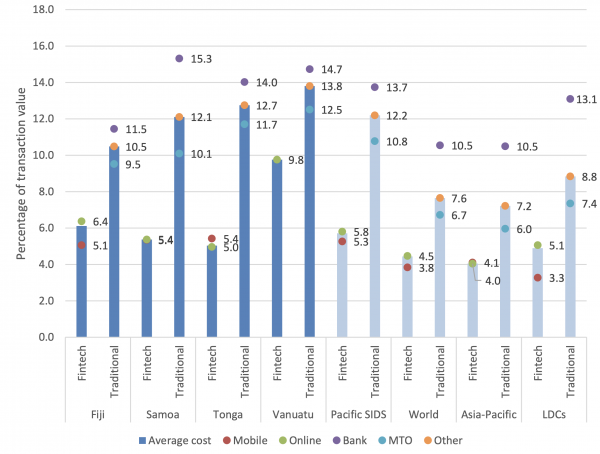 A recent report by GSMA cites that international remittances through mobile money can reduce costs by more than 50% compared to traditional MTOs. The figure above compares the differences in fees charged by fintech and traditional remittance service providers in various parts of the world. The Remittance Prices Worldwide database collects detailed information on the evolution of the total remittance costs by type of company and access point. The most affordable is mobile money services, followed by online platforms. As expected, MTOs and banks provide the most expensive services. For Vanuatu, the potential reduction in costs for remittances via a traditional remittance service provider and a fintech company-hosted online platform can be more than 30%. With the recent launch of TVL’s mobile money services, traditional operators such as Western Union will come under pressure to reduce costs to be more competitive.

New innovations in digital technology are rapidly changing the global remittance landscape. Branchless banking technologies and mobile money services have the potential to significantly lower the cost of remittances. Expanding access and reducing the cost of financial services, especially remittances, is an important step towards an inclusive economy in Vanuatu and the wider Pacific.