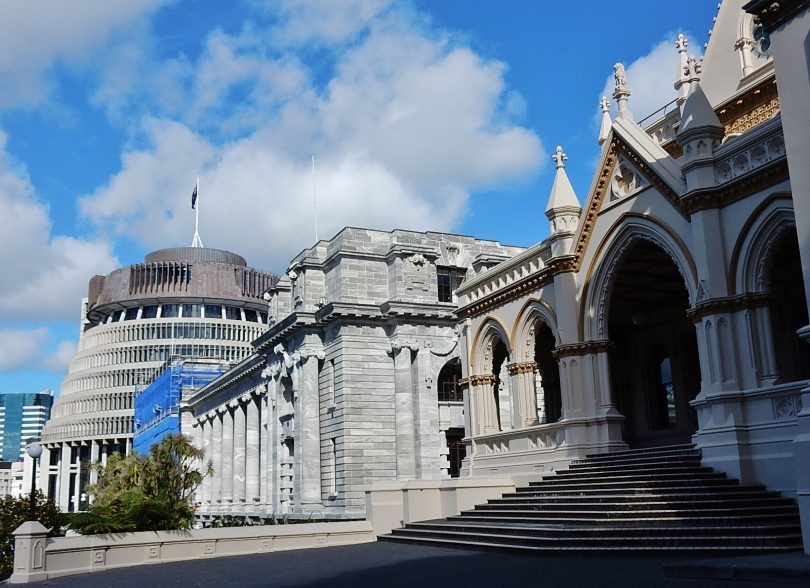 Last Thursday was budget day in New Zealand. It brought another massive increase in New Zealand aid (18 per cent!). This is not good news.

The light grey line in the chart shows data from the budget for the 2015/16 financial year — the first from the current three year period. In that budget, aid was set to increase modestly but steadily. This was good, or at least it would have been were it not for the fact that — as the 2016/17 budget revealed (the dark grey line) — by May 2016 the aid programme was behind in spending the planned increase. Thanks to three year aid appropriations, the unspent money was not lost. However, a rapid increase in spending had to be built into the budget for the 2016/17 financial year to enable the triennium’s aid allocation to be spent. At the time Jo Spratt and I expressed our concerns at the spending patterns, arguing they were caused by a capricious foreign minister. New Zealand’s foreign ministry disputed this, arguing the foreign minister wasn’t to blame, and that there wasn’t a spending problem. While we weren’t convinced by all of their arguments, we were grateful for their engagement. We decided to wait and see.

As the red line (from this year’s budget) shows, while aid spending increased slightly in the 2016/17 financial year, the increase still fell a long way short of the budgeted target. And so in the coming 2017/18 financial year New Zealand aid is set to rocket up. It has to if the triennial budget is to be spent. I would love it if the aid programme was able to spend this money, and spend it well. New Zealand has a new foreign minister now. It’s always possible he might make the aid programme’s work easier. But an 18 per cent increase is a lot. Too much. 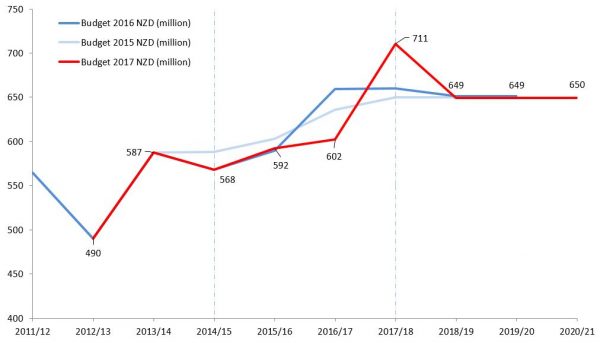 Last week’s aid budget also provides projections for the next three year-period’s aid spend. As the chart below shows, nominally, aid is projected to stagnate in these coming years. Once inflation is taken into account it is set to fall. By the 2020/21 financial year, if this budget’s projections are correct, in inflation adjusted terms New Zealand’s aid spend will be about as low as it was in the 2013/14 financial year. 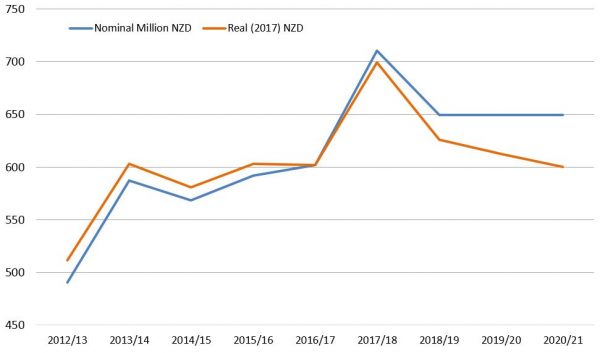 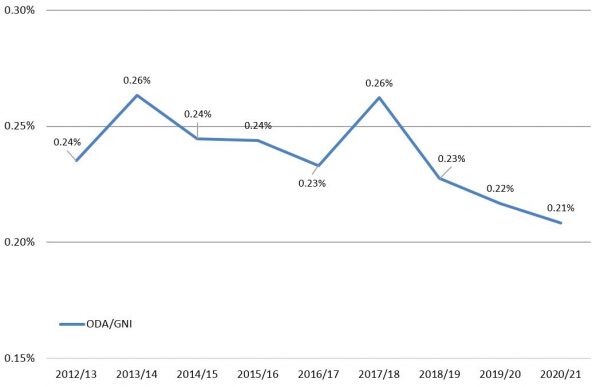 This year’s budget brings with it a massive, supposed, increase in New Zealand aid, but in reality it brings nothing to celebrate.

Data and information on data sources can be downloaded here.