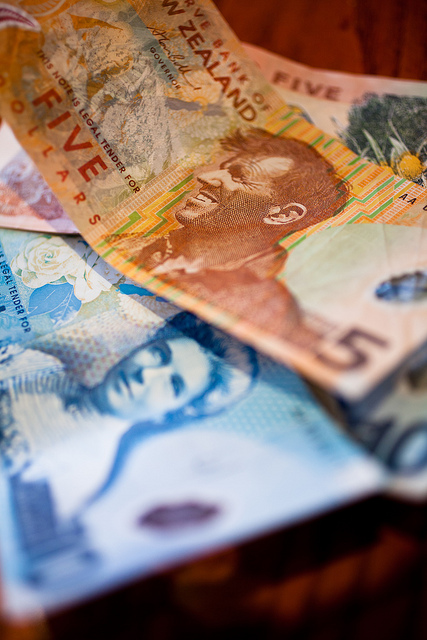 Does the New Zealand Aid Programme have a problem with budgets and spending, or doesn’t it? In an earlier blog post we argued that the dramatic increase in nominal New Zealand government aid this financial year suggested the aid programme was struggling with spending predictability under a difficult minister. Vinny Nagaraj has responded disputing this. His response is well argued. On reading it, the casual Kiwi reader could be forgiven for breathing a sigh of relief and assuming all is well. Alas, this is not the case.

In short, Vinny–who is the aid programme’s chief economic advisor–argued that, because New Zealand aid is appropriated across a three year triennium, year-on-year changes in aid spending are of little concern, and last financial year’s under-spend was small anyhow. He also argued that the amount rolled over from the previous triennium (which ended in June 2015) to this one was also small compared to total budgeted spend for that triennium. He then claimed that the aid programme works well with its partners, and the predictability its planning documents brought is appreciated by them (as evidenced by input from Samoa and Kiribati to the 2015 Forum Compact Review [pdf]). He also pointed out that the OECD has commended the forward spending plans New Zealand provides its aid partners.

We are very grateful he has chosen to engage with us. We’ve written about aid spending issues and roll-overs of money at budget time in 2012, 2013, and 2014. The issue is perennial, but this is the first time we have had any official engagement. We’re thrilled.

In polite New Zealand fashion, we want to start our response by emphasising one area where we are in full agreement with Vinny: having triennial aid appropriations is great! It makes sense given the unpredictable world of aid, and it does indeed reduce “wash-ups” (the hurried last minute giving of unspent aid to multilaterals and the like). Like Vinny we think this is the way aid should be budgeted for, and we commend the previous government for introducing this process in 2003.

Next, we want to clarify a point that we probably did not make clear enough in our original blog post: we are not concerned that $20 million NZD had to be rolled over from the last triennium. We are concerned that when the 2015/16 budget was being prepared in the closing months of the 2014/15 financial year, the aid programme thought it was going to spend $588 million in 2014/15 (the final year of that triennium). Instead, it actually spent $568 million. The issue here is not an under-spend over three years, it is the fact that the aid programme could be so far off in an annual estimate just a few months before the end of the financial year. $20 million is not pocket change: it is nearly as much as the amount of bilateral aid we gave Cook Islands, our largest bilateral aid recipient in the year in question. A $20 million drift over three years: fine. A $20 million surprise over a few months: an issue.

Our other differences with Vinny are as follows.

First, while aid is allocated triennially, annual aid budgets are still important. Annual budgets help with predictability for organisations and countries that receive New Zealand aid (more on predictability in a second), but they also give a sense, within a triennial allocation, of how the aid programme is spending the money allocated to it. If the aid programme does not want to end up frantically “washing up” at the end of the triennium, it needs to come close to hitting its annual budgets. As Vinny says in his post, last financial year’s under-spend was quite small, but when it was added to the previous year’s last minute shock the numbers started to add up, and all of a sudden the aid budget needed to increase by approximately 12 per cent to give the aid programme any chance of spending the money budgeted to it this triennium. (12 per cent was our original estimate, the number will be slightly less if the numbers Vinny used, which were not previously publicly available, are correct; the difference won’t be much though.) A 12 per cent year-on-year increase is not easy to pull off. We checked using OECD data [.xlsx]. Even including the turbulent 1970s, a 12 per cent increase is within the top quartile of annual increases to the New Zealand aid budget. Manageable as a one off? Perhaps. But as part of a persistent problem? We’re not so sure. This unusually rapid increase was the central point of our previous post, and one Vinny did not address.

New Zealand’s Forward Aid Plans which provide four year forward projections to countries and to regional and multilateral agencies, was viewed as a concrete example of good practice in ensuring predictability of assistance to partner countries. The predictability provided by the forward estimates is valued by both Kiribati and Samoa as it enables them to forward plan and programme more effectively.

We don’t dispute the value of forward projections. Our concern is with stability of actual spending. Here charts of annual New Zealand aid spending in Samoa and Kiribati (based on OECD data [.xlsx]) are instructive. The red line is annual aid volumes under the previous Labour government. The blue line is the same information for the current National government. 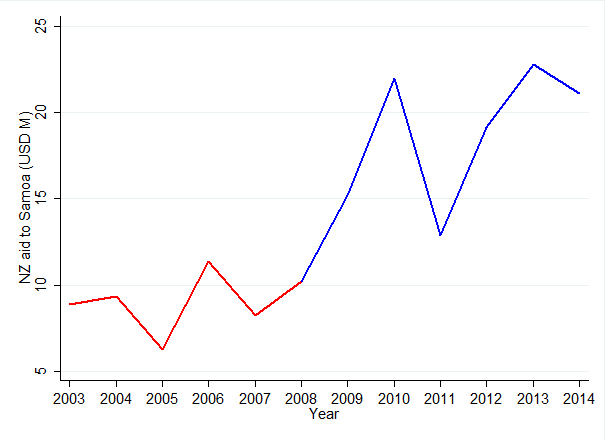 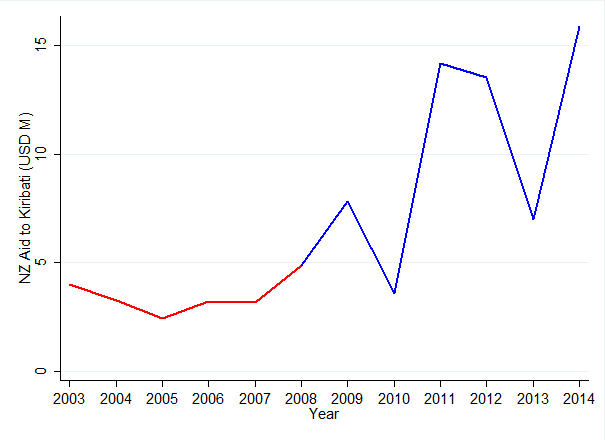 You can see the same problem in the OECD information Vinny appeals to. It is true that in one OECD survey [pdf, p.13] New Zealand was lauded for its country-level forward planning documents. That’s great. But plans are at their best if they can be relied upon. In 2010 and 2011 the OECD published information on how good donors were at sticking to their forward spending plans (irksomely, they then stopped releasing the information). We think the OECD’s methodology could be improved (the method is explained on page 22 here [pdf]). Nevertheless, the information is the best available empirical test of how well donors put plans into action. And unfortunately, in all the various measures bar one, New Zealand scored worse than the median participating donor in both years.[2]

We’re sure New Zealand aid programme staff work hard in aid planning; it’s spending that is the problem. This was our original point.

[1] For those with an interest in these things, the coefficient of variation for both countries is higher under National. Also, note that while the Samoa earthquake of 2009 likely explains some of the aid increase in 2009 and 2010, it does not explain subsequent variation, nor the changes in Kiribati. Likewise, the 2011 Christchurch earthquake struggles to explain the changes: both globally and to the Pacific New Zealand ODA levels increased in the 2011 and 2012 calendar years. Also note that OECD CRS data (which are an imperfect measure but all the public has access to) suggests that much of the variation was in flows to the governments of Samoa and Kiribati, meaning that the fluctuation does not appear to be driven by one-off large infrastructure projects.

[2] Email us if you want the data and calculations behind these claims. If the aid programme is willing to provide us the data for more recent years we would be happy to test empirically if performance has improved on this front. Indeed, we think it would be great if New Zealand included a recipient-level measure of planned spending versus actual spending in its aid performance measures. This would be a very innovative initiative. If done we would happily applaud it on this blog. We would also be very happy to discuss possible methods.