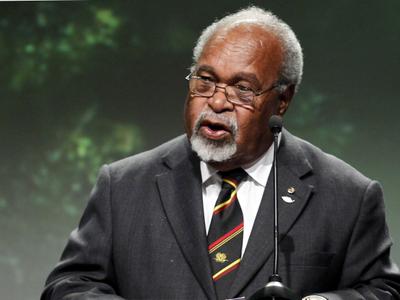 This is a guest post by Ronald J. May from the Australian National University.

Grand Chief Sir Michael Somare has been a member of the Papua New Guinea (PNG) National Parliament since 1968, and for 18 of his 43 years in Parliament he has been chief minister/prime minister, as head of a coalition government.

In the country’s most recent general election, held under a recently introduced limited preferential voting system in 2007, Somare was re-elected to his East Sepik Provincial seat, gaining 38 per cent of first preferences and enough second and third preferences to carry him over the line, albeit only after the final elimination. As leader of the party with the greatest number of MPs (the National Alliance, with 27 of the 109 seats in the National Parliament) he was returned as prime minister by a vote of 86 to 21; he leads a coalition of initially 14 parties.

Under an Organic Law on Political Parties and Candidates (OLIPPAC), introduced in 2001 primarily to prevent constant ‘party hopping’ by MPs, shifts in party coalitions, and recurrent votes of no confidence in the government of the day, a similarly substantial parliamentary majority assisted Somare in becoming the first prime minister since independence in 1975 to survive a full term (5 years) in office — even though the OLIPPAC did not succeed in preventing party splits and attempted votes of no confidence during the 2002–2007 Parliament. Despite a Supreme Court decision in July 2010, which has ruled that the anti-defection provisions of the OLIPPAC are unconstitutional, the Somare government of 2007 seems likely to survive a full parliamentary term. Elections are due in mid-2012 and governments are protected against votes of no confidence in the final twelve months of a parliamentary term.

As in the 2002–2007 Parliament, the present Somare government has been able to use its majority to fend off challenges by controlling parliamentary procedures and adjourning Parliament. Such tactics may have resulted in greater political stability, but they have also generated widespread complaints of ‘executive dominance’ of Parliament, and a good deal of blogging directed against Somare personally. Somare has also come under criticism over his attempts to block, and later suppress the report of, a Defence Board of Enquiry into the so-called Moti affair (in which the Solomon Islands Attorney-General, being sought by the Australian Federal Police, was removed from Port Moresby to Solomon Islands in a clandestine operation which violated several domestic and international laws). The recent charges against the prime minister, relating to his failure to submit financial returns required under the country’s Leadership Code, were pursued against this background — though Somare made light of his resultant two-week suspension from Parliament.

There are also concerns about Somare’s health following complications after heart surgery in Singapore. Somare has taken indefinite medical leave from his prime ministerial duties and there is speculation that he may not return to his parliamentary duties.

His absence highlights questions about post-Somare leadership in PNG. Under the Somare governments of 2002–2007 and 2007–present there have been frequent changes of deputy prime minister (due in part to circumstances within the coalition) but no apparent attempt to groom a successor to Somare. Indeed when respected Finance Minister Bart Philemon attempted to raise the issue of leadership within the National Alliance in 2007 he was dumped by the party and is now in opposition. When Somare stepped down in December 2010 to face the leadership tribunal, his place was taken not by the Deputy Prime Minister, Don Polye, but by another highlands MP, Sam Abal. Abal is an able politician and representative of a new generation of PNG politicians, but there is no clear indication of whether Abal, or someone else, might succeed Somare if he were to step down before 2012 or decides not to recontest in 2012 (which now seems very likely). It is often suggested that Sir Michael would like to see his son, Arthur Somare, the member for Angoram Open, succeed him, but Arthur Somare is currently facing the Leadership Tribunal. And, whatever the outcome of that hearing, it is most unlikely in PNG’s regionally-sensitive and competitive political climate that MPs or the public would accept another Sepik, let alone a second generation Somare, as Prime Minister.

Meanwhile, having faced economic crisis a decade ago, PNG is anticipating a new prosperity based primarily on liquefied natural gas (LNG) — due to commence production in 2014 and forecast to double the country’s GDP — but also on other mining and petroleum developments and good commodity prices for agricultural exports.

These developments will call for careful management if the prospective benefits are to be secured and distributed equitably. To date the management of returns from major development projects has been generally poor and service delivery in many areas of government has fallen behind policy targets. If the bonanza anticipated by landowners in the vicinity of big resource projects does not materialise, we can expect to see growing unrest.

Already, it seems, PNG is sliding into election mode, with the formation of new political parties being announced and prospective candidates lining themselves up. What happens over the next 12 to 18 months is likely to have profound implications for the country’s medium- to long-term future.

Ronald J. May is Emeritus Fellow of the State, Society & Governance in Melanesia Program, Australian National University. He has had a distinguished career including former positions as Senior Economist with the Reserve Bank of Australia, Field Director of the ANU’s New Guinea Research Unit, and foundation Director of what is now the National Research Institute (NRI) in Papua New Guinea.

This post was originally published here on the East Asia Forum.