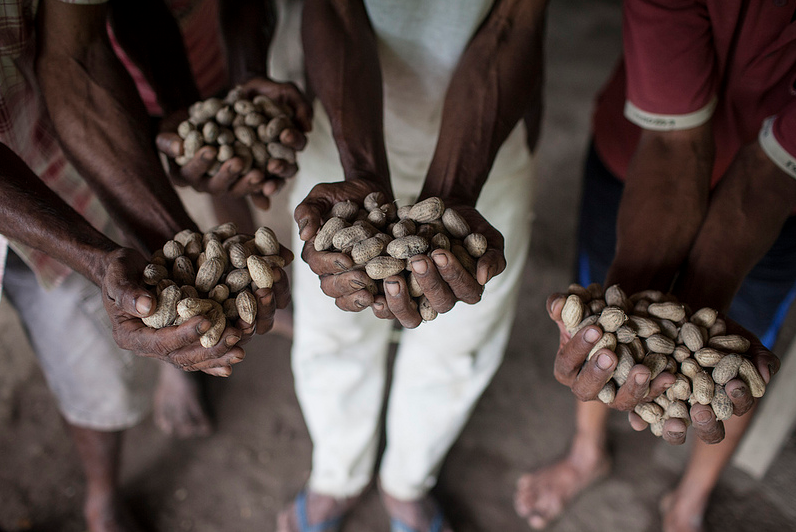 Farmers in Timor-Leste showing off their peanut harvest. Photo: ACIAR.

Just as the US is pushing to reform its long criticised food aid program, Queensland graziers and Victorian stonefruit growers are calling on the Australian government to purchase and send surplus livestock and agricultural products to developing countries in the name of ‘helping’ – and their idea is being backed by some federal MPs.

The Australian Financial Review (May 8 2013, Page 7) reported on calls for the Australian government to buy 100,000 head of cattle, worth up to $50 million, as part of a ‘United States-style aid-for-food plan’.

The idea was tentatively backed by the Australian Agricultural Company’s David Farley, ‘so long as this does not jeopardise existing trade’. Nationals senator Barnaby Joyce fully endorsed the plan. Independent MP Bob Katter has also supported the idea, and Member for Leichhardt Warren Entsch told ABC Radio that AusAID should allocate some of their budget to ‘make beef available to people in need’.

A beef crisis steering committee has also steered their way to Canberra to call on cutting cash aid to Indonesia and PNG in favour of sending cattle instead.

This is the second time this year we have seen these kinds of proposals being discussed on the national stage. Sharman Stone, Member for Murray, has been campaigning for the government to use foreign aid funds to support Australian companies to send tinned fruits abroad after tonnes of apricots in Victoria were left ‘rotting on the vines’. Despite detailed responses from AusAID and DFAT explaining why her plan isn’t feasible, Dr Stone is undeterred.

Alan Jones, originally a vocal supporter of sending excess fruit, recently switched sides to the beef aid camp. He said it was better for AusAID to spend its money buying food ‘instead of guns’. (Time to shut down that secret ‘weapons for development’ program, AusAID.)

For Australian graziers and those who can’t get their apricots in tins fast enough, sending it abroad and getting the aid program to pay for it seems like a perfect solution. But what about cattle producers or fruit growers in developing countries? The attitude seems to be that it is Australia’s right to flood their markets with stuff that we don’t want (known as SWEDOW in development blogging parlance), and pretend that we are doing it out of charity.

Not to mention the obvious questions of efficiency, value for money, effectiveness and moral hazard that these proposals raise.

The US has been buying domestic produce (and US shipping services) for food aid for half a century for the Food for Peace and other programs, and for its in-kind contributions to the UN World Food Programme (WFP). The massive inefficiencies of this policy have been criticised for decades. The US food aid program has been slammed for being ‘corporate welfare’, ‘causing rather than reducing hunger’, ‘expensive and sometimes damaging’ [pdf, page 29], and ‘expensive, slow, and often misdirected’ among many other critiques.

From analysis of USAID reports, Oxfam America recently estimated that 53 cents out of every dollar spent on food aid went to overheads, shipping costs and price markups rather than food (this infographic provides a quick snapshot). It’s a huge proportion of the total, which could be reduced if aid were provided as cash for local and regional purchasing of food and transport.

In recent months, the Obama administration proposed significant reforms to food aid to enhance its cost-effectiveness and development impact. The bill, which is now on shaky ground after a number of knock backs by Senate and House committees, would see more food supplies purchased in developing countries — however more than half would still be required to come from US producers.

Changes would also be pushed in the non-emergency ‘monetisation’ scheme, where charities and NGOs receive US produce to sell in developing countries so that the proceeds, in local currencies, can be used for aid projects. The Government Accountability Office recently found that this inefficient system wastes some 25 per cent of money raised.

These proposals have not been well received by agricultural lobby groups, but the aid and development community has welcomed them as a step towards improved effectiveness and value for money.

USAID administrator Rajiv Shah said that the system of shipping US food aid abroad had been inefficient and changes were necessary in the face of humanitarian crises in Syria and famine in Africa.

Of the reforms, he said: “If we don’t do this, the consequences will be very severe in a very human, very real way.”

Yet here, some MPs are now actively campaigning for inefficient aid. They are holding up US food aid as a model for the Australian aid program to aspire to. But Australia has already been there, done that, learned the lessons and moved on – in the past Australia used a ‘tied’ approach for food aid but has now shifted to cash.

There are a number of misconceptions that underpin these kinds of proposals.

First, the idea persists that malnutrition is directly correlated with food shortage. This is not always the case. When I was in Timor-Leste, I saw firsthand how families were selling the micronutrient-rich green leafy vegetables they had grown to buy white rice, which they would then feed to their children as a watery porridge. Under-5 stunting rates in Timor-Leste are one of the highest in the world. Malnutrition interventions can be as much about education, tools and income as access to food.

Second, there is the assumption that all food is suitable to use as food aid. Specialised foods (i.e. Plumpy’nut and others) are used for emergency feeding and fortified foods are used during famine crises. Frozen beef, while high in iron, doesn’t seem like the most practical food to deliver post-disaster or to remote regions (I’d like to see costings on refrigerated four wheel drives). And as AusAID so politely explained in its response to Dr Stone, “fruit alone cannot address micro-nutrient deficiency caused by inadequate intake of food”.

Third, the proponents of these proposals completely misunderstand what the Australian aid program actually does (FYI Alan, there are no guns). Food aid is provided during emergencies (Australia’s is provided through the WFP), as well as for school feeding programs, day labour programs and other interventions. But there are also many programs working to address the structural causes of low agricultural productivity, post-harvest losses and malnutrition, for example by introducing drought- and pest-resistant crop varieties. This is how an aid program works towards longer-term change, rather than just showing up every so often with a truckload of tinned apricots branded with kangaroos.

And last but not least, why is there the expectation that the foreign aid budget can be raided to solve this domestic ‘crisis’? The proponents seem to have little regard for the potentially distortionary effect on food markets if supply is artificially stimulated. Yet, ironically, all of those pushing for this ‘solution’ have recently been campaigning for stronger anti-dumping regulations at home.

If government intervention is really necessary to save Queensland’s graziers and Victoria’s fruit growers from catastrophe, surely it can come from the other 99.63 per cent of Australia’s GNI that isn’t spent on aid.

Or would that perhaps be too charitable of us?