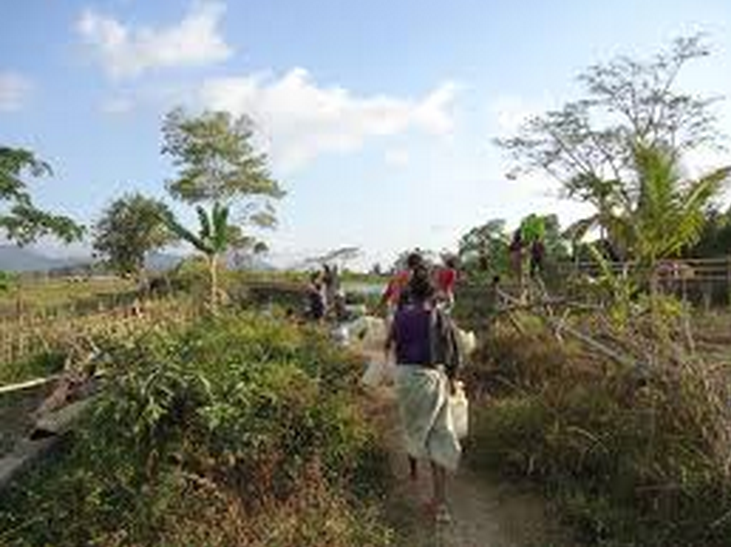 Typically, the rainy season in Timor-Leste begins in November. As mid-November passes, the rains have yet to arrive to soak and re-hydrate the cracked, parched landscape. In the eastern sub-district of Ossu, where communities engage in agricultural activities, families are experiencing a ‘triple burden’ with the prolonged dry season. Not only are they busy collecting water and firewood, they are diligently harvesting food crops and preparing fields for the next planting season that will commence with the wet.

Located below Mundo Perdidu Mountain, the populations of Ossu have good access to fresh water sourced from springs. Nonetheless, between September and November each year, water availability is substantially reduced. In the town centre of Ossu – where families get water from pipes and taps fitted close to, or in their homes – the delayed start to the rainy season has extended the period of limited water supply well into November, with water availability during this extended period even more restricted than the normal dry season.

Children, women and men walk daily to the local dam Wai Ulau to fetch water, bathe, and wash clothes. Depending on usage, some families fetch water up to three times a day. Many people work collectively, taking turns to fetch water for one’s relatives and neighbours. Those who have access to motor vehicles are able to load more jerry cans and make several trips a day. A truck can carry over a hundred jerry cans and several water tanks at a time.

The scarcity of water in town has created a social space at the Wai Ulau dam, where the local population gathers in the late afternoons; it has also raised distrust amongst community members and become a source of conflict. Those who take large quantities of water are accused of exploiting a local commons, and those living upstream are suspected of redirecting or cutting off piped water from the rest of the community downstream.

In the smaller upland communities of Kai Uai Hoo and Uai Bu’a, farming families are currently engaged in the physically demanding work of harvesting rice from terraced fields, and simultaneously burning and tilling dry garden beds to plant maize and other food crops in time for the wet season. Although water availability is better than Ossu town, families similarly relayed a decline in supply that is normally obtained from roadside taps. Many have resorted to fetching spring water located further up in the mountains or down in the valleys.

The Timor-Leste government’s electricity roll-out into the rural districts has brought 24/7 electricity to the majority of households in Ossu, enabling families to use rice cookers and water kettles. However, most continue to rely heavily on firewood to cook – a cheaper source of fuel compared to gas and electric cookers – which consequently continues the burden of firewood collection.

Nearly 70 percent of the Timorese population is engaged in agriculture. Scholars and development practitioners have emphasized the significant negative impacts the ‘hungry season’ places on household food security and nutrition. The ‘hungry season’ marks the rainy months from November (after planting) to March (before harvest). Associated with this, close to two-thirds of East Timorese are food insecure and 54 percent of children under the age of five are stunted. A recent news article further highlights the lack of access to clean water in Timor-Leste, leading to infectious diseases and diarrhea in children.

As in Ossu, it is highly likely that Timorese families in other districts are currently struggling with this triple burden and experiencing a protracted period of stress ahead of the hungry season, with high levels of household energy expenditure associated with the collection of water, firewood, and harvesting and re-planting of crops.

Aid programs have seen an improvement in rural household food security through the introduction of high-yield, resilient and nutritious seed varieties, together with the promotion of improved post-harvest storage systems. A more integrated approach to improving rural livelihoods might include a greater focus on reliable water access in the dry, and on cleaner and more efficient wood stoves. Taking into account seasonal livelihood challenges might reduce the overall burden on rural families in Timor-Leste.

Pyone Myat Thu is an Adjunct Research Fellow in the School of Earth and Environment at the University of Western Australia. The views put forward in this article are those of the author, and not of the School or the University.